Delta Air Lines grows 3.4% at Atlanta so far in 2014; 213 destinations served this September On 2 September, Delta Air Lines commenced daily flights to Rochester from Atlanta — its biggest operational base that is connected to a total of 213 non-stop destinations this September. Domestic traffic accounts for 89% of the seat capacity Delta offers out of Atlanta, giving the carrier an 80% share of domestic capacity at the airport.

Atlanta Airport (perhaps better known as Hartsfield–Jackson Atlanta International Airport) is the world’s busiest gateway (according to 2013 passenger rankings), and it is also the biggest operational hub for the world’s second biggest carrier, Delta Air Lines, delivering over 21% of its total weekly capacity split across a network of 325 destinations. Following the American Airlines-US Airways merger that was completed in December last year, the SkyTeam member became the world’s second biggest carrier, with 165 million passengers carried in 2013, when compared to American with 194 million. This September, Atlanta offers over 580,000 more weekly seats than the second busiest airport for Delta — Detroit — an increased lead than the nearly 533,000 seats recorded in September 2013. Over the same timeframe, the gap between Atlanta and its #3 base at Minneapolis-St. Paul has grown from 545,000 weekly seats to over 585,000.

Analysis of data facilitated by Atlanta Department of Aviation reveals that Delta along with its regional partners handled 76 million passengers at the airport in 2013, representing a modest increase of 1.1% when compared to 2012 figures. Furthermore, in the first seven months of 2014, for which traffic data is already available, the carrier posted an increase of 3.4% when compared to the corresponding period of the previous year, with close to 46 million passengers achieved at the airport until end-July. If the SkyTeam operator continues on this growth trajectory, it will handle over 78 million passengers from Atlanta in 2014, based on anna.aero’s forecasts. 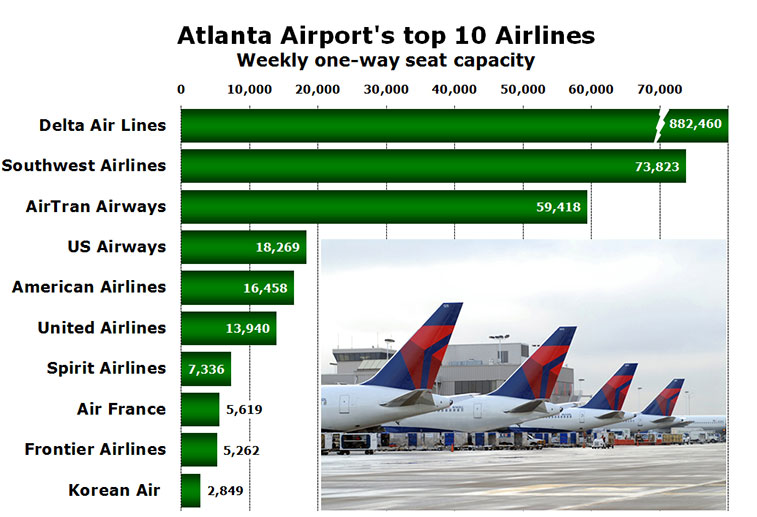 Evaluation of Innovata schedule data for this September indicates that the SkyTeam member is the clear market leader at Atlanta, with a weekly seat share of over 80% (1% more than in the corresponding month of 2013). Furthermore, domestic traffic accounts for 89% of the seat capacity Delta offers out of Atlanta, giving it an 80% share of domestic capacity at the airport, above Southwest Airlines (7.3%) and AirTran Airways (5.9%). In fact, the carrier expanded its domestic offering from Atlanta on 2 September, when it commenced daily flights to Lincoln (Nebraska) and Rochester (Minnesota), using ExpressJet Airlines’ metal. Moreover, Delta also dominates the international market out of Atlanta, accounting for an 82% share of seat capacity, followed by Air France and Korean Air at only 4.9% and 2.5% respectively.

Despite the fact that a couple of other services were launched in the last 12 months, including links to Leon/Guanajuato, Kingston, Freeport, Halifax and Vancouver, the total number of weekly departures operated by Delta from Atlanta this September has remained unchanged, as the carrier has converted its previously year-round flights to Zurich to summer seasonal operations and has reduced frequencies to a number of domestic destinations, such as Washington Reagan, Jacksonville, Detroit, Birmingham and Houston Intercontinental. Following the conversion of the Atlanta-Zurich operations to summer seasonal flights, the SkyTeam carrier introduced year-round services between New York JFK and Zurich on 2 September. 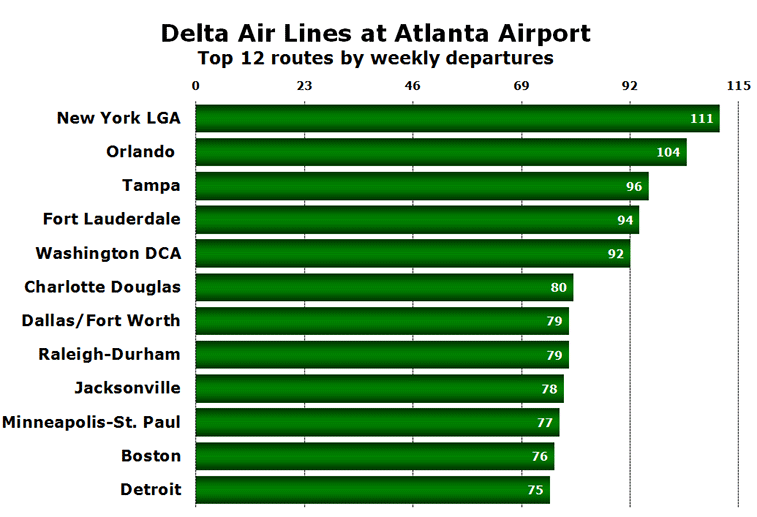 For the week analysed, Delta operates a total of 213 non-stop routes from Atlanta with an average weekly frequency of 30. By comparison, the airline offers 131 destinations from Detroit with an average weekly frequency of 22.9. The airline’s top 12 routes from Atlanta account for 16% of all weekly flights (up 0.6% from last year’s figures), of which New York LaGuardia is still the most frequently flown destination.

Los Angeles is #1 route by ASKs

Analysis of which of Delta’s routes from Atlanta offer the most capacity as measured by ASKs (Available Seat Kilometres) still sees Los Angeles top the list. However, half of the top dozen routes are on long-haul international services (highlighted in bright green), including three to Europe, and one each to Asia, Middle East and Africa. Three of the international airport pairs are served daily, Paris CDG is served twice-daily, while both Amsterdam and London Heathrow have thrice-daily flights from Atlanta. Noteworthy is the fact that Amsterdam and CDG are major hubs for fellow SkyTeam members KLM and Air France respectively. 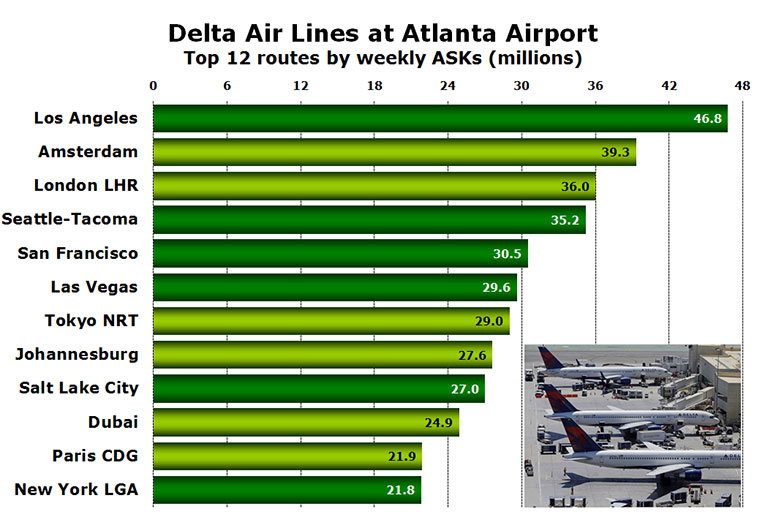 The 7,083-kilometre sector to the Dutch capital is the fastest growing airport pair (+76%) this September (when compared to data from the corresponding week last year), due to Delta having increased its frequency from twice-daily to thrice-daily. On the other hand, the Atlanta-Las Vegas route provided the greatest capacity decrease (-7.2%).