Emirates touches down at Brussels from Dubai 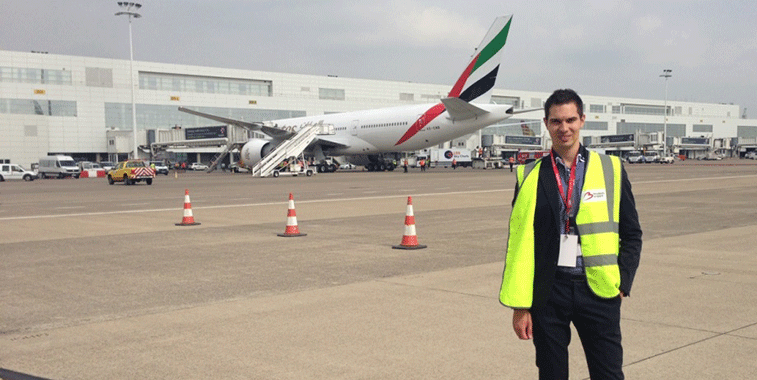 anna.aero’s Vlad Cristescu poses with Emirates’ 777-200LR shortly after the airline has touched down for the first time at Brussels Airport. Starting on 1 February 2015, Emirates has taken the decision to increase the capacity on the new sector by operating the much larger 777-300ER.

anna.aero was delighted to be invited by Brussels Airport to the arrival ceremony of Emirates’ first flight from Dubai on 5 September. The 5,152-kilometre sector to the European capital will be operated on a daily basis utilising the carrier’s 266-seat 777-200LRs. However, starting on 1 February 2015, Emirates will increase its capacity on the route as it will replace its current operations with 364-seat 777-300ER services. The flights are scheduled to depart from Brussels at 14:45 local time and arrive in the most populous city of the UAE at 23:25. The largest airline in Middle East according to weekly seat capacity for this September will face no competition on the new airport pair, but fellow MEB3 carriers Qatar Airways (six times weekly) and Etihad Airways (eight times weekly) will provide their usual indirect competition via their respective Abu Dhabi and Doha hubs.

Commenting on the launch of operations to Brussels, Tim Clark, President, Emirates, said: “As the centre of European politics and a hub of economic activity, Brussels is already an important offline market for Emirates. Our research has shown that there is high demand for this route from across our network, from both the business and public sector as well as leisure travellers. Belgium operates an open and private enterprise-based economy and we expect this new service to further boost bilateral trade and commerce between the UAE and Belgium, which currently sits at around four billion Euros per year.” Scheduled to depart from Brussels Airport at 14:45 local time, the first return flight to Dubai was delayed deliberately for two hours to allow media and officials invited to the arrival ceremony the chance to experience what is like to be on-board Emirates’ 777-200LR. The arrival of the third MEB3 carrier at Brussels Airport (as Qatar Airways and Etihad Airways are already serving the airport) was welcomed with the traditional water arch salute at 12:35. A total of 185 passengers were on-board the inbound flight to the European capital, while on the outbound service, Emirates had a load factor of over 75%. See how Brussels Airport’s FTWA compares to the others sent in this week from around the world. Following the water arch salute, a special ceremony was held in the terminal, organised by Emirates in partnership with Brussels Airport. A total of 120 guests attended the event that included a press conference by airport and airline officials. Addressing to the audience, Arnaud Feist, CEO, Brussels, said: “The connection to the Gulf region remains fundamental for Belgium, with Dubai being one of the most dynamic destinations in the world. This new direct connection will be welcomed by more than 3,000 Belgians that work and live in the UAE and will generate employment and added value to both countries. In addition, this link will provide the Belgian traveller with a broad choice of convenient transfer connections throughout the Middle East, Asia and beyond to Australia and New Zealand.” 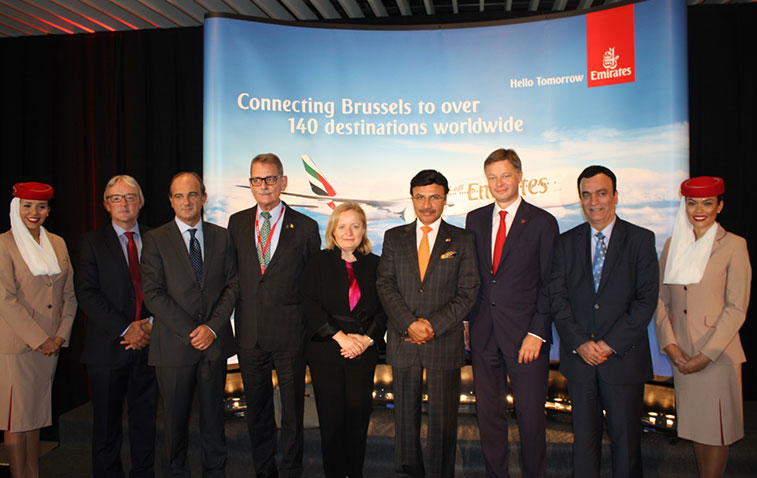 Lastly, the celebrations were closed with a special tour on-board the airline’s three-class configured 777-200LR. Emirates will be the first international airline to offer a First Class product from Brussels to the Middle East and Asia, offering passengers an unrivalled travel experience.