The State of Kuwait only has one civil airport, Kuwait International Airport. The airport has grown steadily if unspectacularly in recent years, with the national carrier Kuwait Airways not trying to emulate some of the region’s other carriers in trying to become a global hub carrier. Even so, passenger numbers have more than doubled between 2003 and 2012, and last year traffic growth was 5.6% suggesting that the airport could break the 10-million passenger mark in 2014 for the first time.

Last week saw the arrival of the airport’s latest new airline, Cebu Pacific Air. The Philippine carrier launched thrice-weekly flights from Manila on 2 September, with the first service from Kuwait taking place the following day. At over 7,600 kilometres this is the airport’s third longest non-stop service, beaten only by United Airlines’ service from Washington Dulles (10,580 kilometres) and Kuwait Airways’ service to New York JFK (10,220 kilometres) 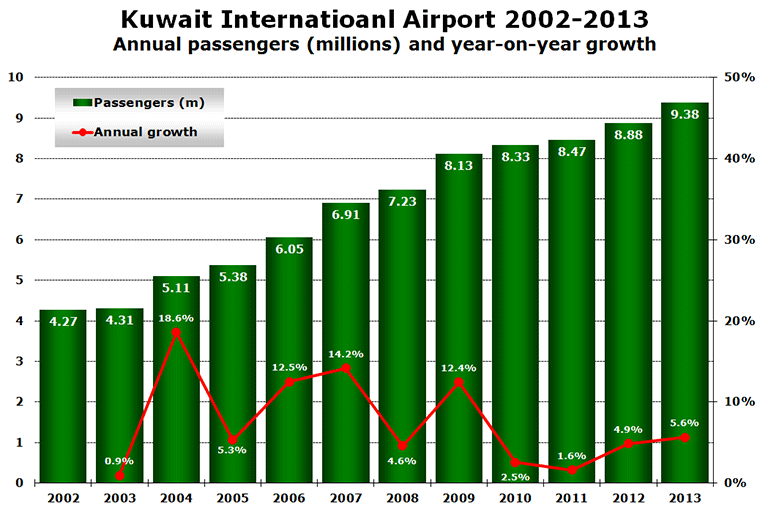 Based on analysis of Innovata / Diio Mi data for September, Kuwait Airways serves around 30 destinations non-stop from its home airport. The only destination served currently that was not served last September is Lahore, to where services were launched in April. Destinations served in Europe include Frankfurt, London Heathrow and Rome Fiumicino. Asian destinations include Bangkok, Colombo, Dhaka and Kuala Lumpur, as well as the Indian airports of Chennai, Delhi, Kochi and Thiruvananthapuram. 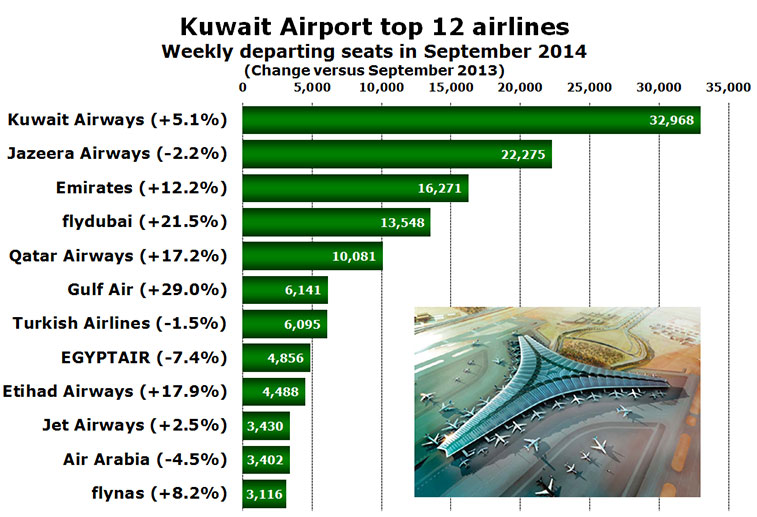 Jazeera Airways is a Kuwait-based low-fare airline which started operations in October 2005 and currently serves 14 destinations non-stop from Kuwait using a fleet of A320s. During the last year the airline swopped its Istanbul Sabiha Gökçen service for flights to Istanbul Atatürk instead. It also began serving Dubai Al Maktoum, as well as maintaining multiple daily flights at Dubai’s main airport.

A total of 41 airlines currently operate scheduled services to Kuwait including all of the MEB3 carriers (Emirates, Etihad Airways and Qatar Airways). Apart from Cebu Pacific, other new carriers at the airport during the last 12 months have been Pegasus Airlines (which began flights from Istanbul Sabiha Gökçen on 26 March 2014), Nile Air (which started flights from Luxor in May) and Atlasjet (which introduced flights from Istanbul Atatürk in July). Compared with last September seat capacity across all airlines is up just over 8%.

In terms of leading cities, Dubai leads the way with 23 daily flights split across four airlines; flydubai (11 daily flights), Emirates (six), Jazeera Airways (four) and Kuwait Airways (two). Doha, Cairo and Bahrain are the next busiest routes, but with just 63, 58 and 56 weekly departures respectively. Dubai Al Maktoum and Manila are the two busiest new markets served this year that were not served in September 2013.