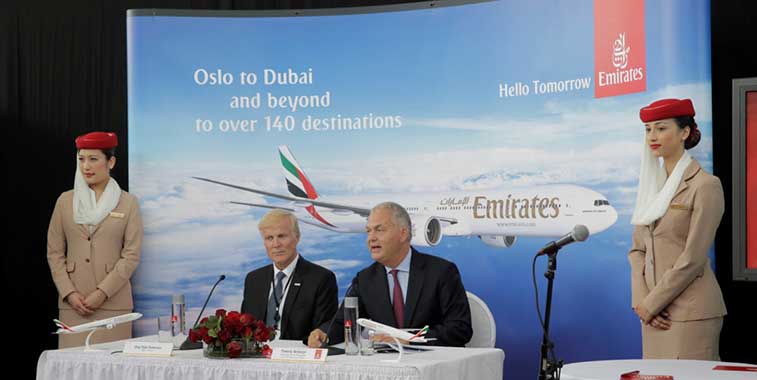 On 2 September, Emirates touched down for the first time at Oslo Gardermoen, with the addition of daily flights from its Dubai hub utilising 777-300s. Therefore, the Norwegian capital became the third Scandinavian destination served by the MEB3 carrier, joining its existing operations to Stockholm Arlanda and Copenhagen. Celebrating the arrival at Gardermoen are: Thierry Antinori, CCO, Emirates; and Dag Falk-Petersen, CEO, Avinor.

Having a population of around 634,000, the city of Oslo is served by three airports, Oslo Gardermoen, Oslo Rygge and Oslo Torp, which handled a combined total of 27 million passengers in 2013. Gardermoen, the main gateway to the Norwegian capital, contributed close to 23 million of those passengers and accounted for half of the country’s air traffic last year. Furthermore, the airport serves as an operating base for SAS and Norwegian, as well as a focus city for the Norwegian regional airline Widerøe.

Under operational control of Avinor (Norway’s state-owned airport operator), Gardermoen offers 117 non-stop services flown to 38 countries within Europe, Africa, Middle East, Asia and North America, according to Innovata schedule data for this September. Noteworthy is the fact that on 2 September the airport attracted its second MEB3 carrier, as Emirates arrived with daily services from Dubai (Qatar Airways is already serving the Norwegian gateway from Doha as of October 2011). Following an increase of 4% in passenger numbers last year, when compared to 2012 figures, Gardermoen established itself as the second busiest airport in the Nordic countries (behind Copenhagen — 24 million, but above Stockholm Arlanda — 21 million), according to anna.aero’s European Airport Traffic Trends database. Moreover, the airport is classified as #17 in the 2013 European rankings. 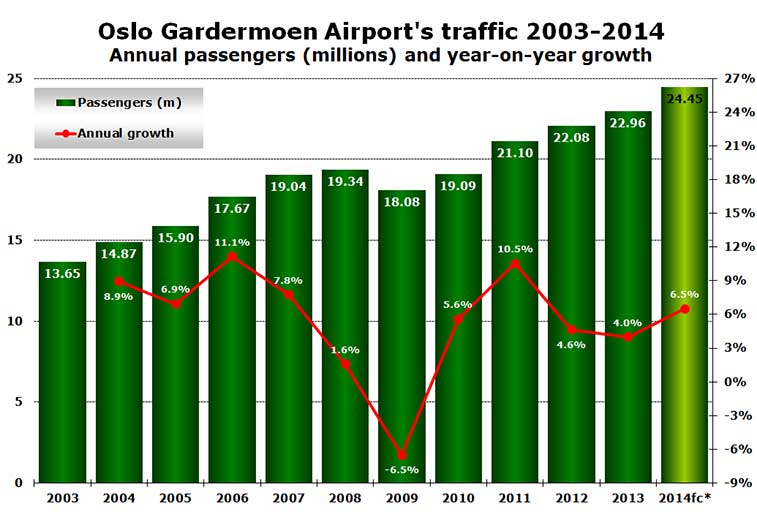 Analysis of Avinor data reveals that passenger traffic at Gardermoen has grown visibly between 2003 and 2013, with an average annual growth rate (CAGR) of 4.8% over this timeframe. The busiest Norwegian gateway handled almost 23 million passengers in 2013 (a new record high), a number that increased from the 14 million noted 11 years ago. In fact, Gardermoen experienced growth every year since 2003, with the exception of 2009, when it recorded a decrease of 6.5% due to the global economic recession strongly affecting Norwegian air travel as well. In the first seven months of 2014, for which traffic data is already available, the airport posted an increase of 6.5% when compared to the corresponding period of 2013, with over 14 million passengers handled by the end of July. If Gardermoen continues on its existing 2014 growth trajectory, anna.aero forecasts that it will surpass 24 million passengers this year.

Entering Gardermoen’s monthly passenger data for 2013 into anna.aero’s Seasonal Variation in Demand (SVID) calculator, the airport performs exceptionally well, producing a score of 1.80, an “excellent rating”. To give Gardermoen a fair evaluation, we also ran calculations on Torp (4.03, good) and Rygge (8.22, good). Against its airport peers from the Oslo area, the airport performs better than the significantly smaller Torp (1.8 million annual passengers) and Rygge (1.9 million), due to traffic being more evenly spread throughout the year. With 55 seasonality performance evaluations completed so far this year, Gardermoen has entered the rankings at #16 position, between New York JFK (1.77) and Berlin Schönefeld (1.96).

While a total of 33 airlines operate from Gardemoen, the top dozen carriers command almost 94% of all weekly seats this September. As a result of increasing its weekly capacity by 5% or 7,334 seats, SAS managed to maintain its top position in 2014. Therefore, the Star Alliance member, which controls 43% and 42% of weekly seats and flights respectively, operates a total of 49 non-stop routes from Gardermoen, of which Trondheim is the most frequently flown destination, being served with over 100 weekly flights. Ranking second with a weekly seat share of 39%, Norwegian — the only LCC in this year’s ranking — connects Gardermoen to 77 destinations, including flights to Fort Lauderdale, New York JFK, Los Angeles, Orlando and Oakland in the US. 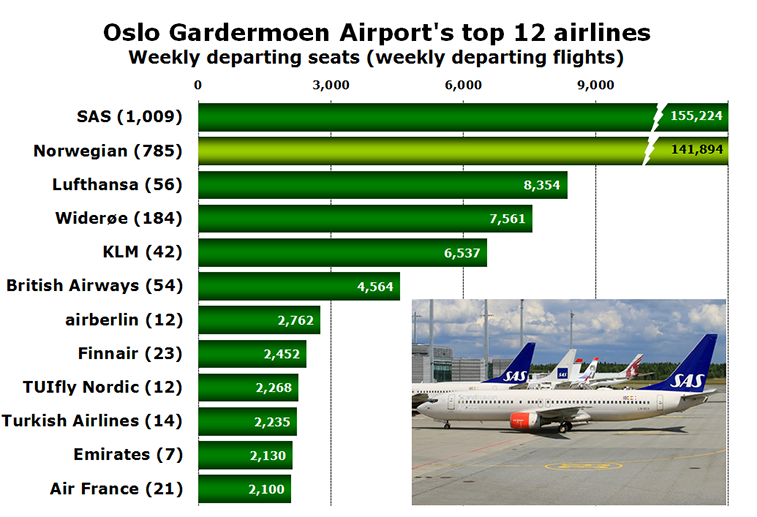 Weekly seat capacity for this summer has gone up 4.1% (when comparing data from this September with the same week last year), with five of the top dozen operators recording capacity growth, while Turkish Airlines saw its operations unchanged and Emirates landed for the first time at the airport on 2 September. Besides Emirates, Gardermoen has seen the arrival of five other new carriers in the last 12 months, namely germanwings, bmi regional, Nouvelair Tunisie, SunExpress and NextJet, with the latter having added five weekly flights from Växjö on 3 March. SAS is not only the biggest carrier, but also the fastest growing operator at Gardermoen, posting a net annual growth in weekly capacity of 7,334 seats. By comparison, following the withdrawal of operations to Bodrum and Gran Canaria as well as the reduction in frequency on some existing routes, TUIfly Nordic has trimmed a total of 1,512 seats (-40%) from its September schedule. On 3 March, Sweden’s NextJet — another new arrival at Oslo Gardermoen — commenced five weekly operations from Växjö to the Norwegian gateway, utilising its Saab 340s. Besides Emirates and NextJet, Gardermoen has seen the arrival of germanwings, bmi regional, Nouvelair Tunisie and SunExpress in the past 12 months.