Tokyo Narita FTWA win is ‘Out of this World’ 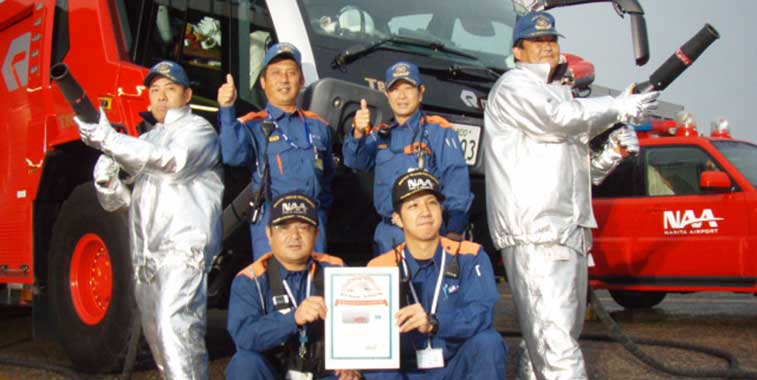 Is there life on Mars? The jury is still out on that one…but there is definitely water on the red planet…which means if there is ever a need for an airport fire service up there…then the firefighters from last week’s ‘Arch of Triumph’ winners Tokyo Narita have all the gear needed already.

With its second entry of 2014, London Gatwick, anna.aero’s home airport, has won its first ever ‘Arch of Triumph’ for the launch of Garuda Indonesia’s new service from Jakarta. With its winning score of 33.2, it does not however make the overall leader board, joining Budapest and Tokyo Narita airports in equal 11th. This result is however significantly above the average winning score of 2014, which after 31 weeks of competition is 30.7. This average result has increased by 0.2 over the last six weeks, which has seen five above average scores (34.9, 34.0, 33.2, 33.2, 33.1 as well as a 22.8) in that time. So standards in this global competition continue to climb and gaining an illustrious ‘Arch of Triumph’ certificate for the fire station walls, continues to get ever harder. Special mention must also go to Kuwait City, which has attracted the lowest ever FTWA score of -17.1. Keep monitoring!! 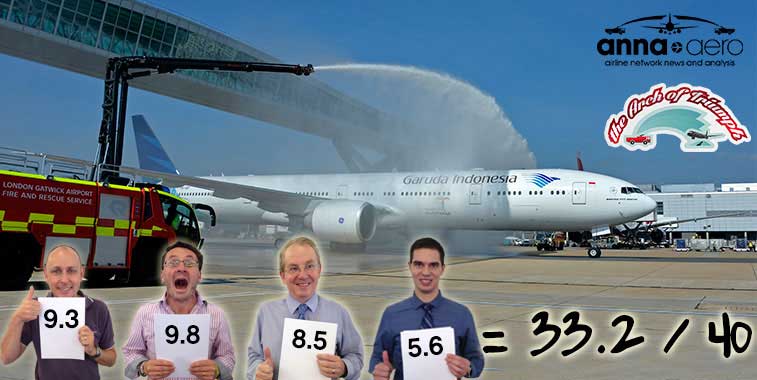 Gatwick welcomes Garuda this week with a majestic ‘Arch of Triumph’ of some calibre.

Judge’s comments: Known locally as a ‘London Gatwick Bridge’ style FTWA, the airport’s famous passenger bridge which crosses Taxiway Lima to reach Pier 6, was clearly providing the inspiration for this week’s new route launch from Garuda Indonesia. Looking at the picture, the Rosenbauers performing the ‘Arch of Triumph’ could easily have cleared the 32-metre high structure, so the Asian airline’s 777-300 was no problem at all for the Gatwick firefighters. 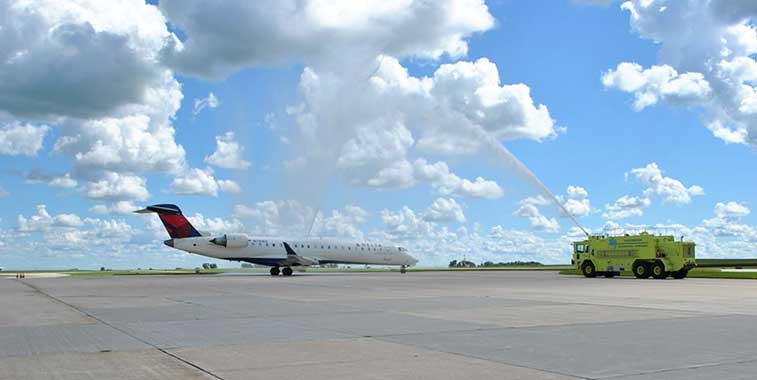 North American airports have only won two FTWAs in 2014 – evidence of why, above.

Judge’s comments: Rochester’s effort isn’t the worst by any means this week, but it isn’t the best either. Last year, North America scooped the global inter-regional ‘Arch of Triumph’ competition, narrowly seeing off the European challenge by a solitary win. In 2014, Europe has already amassed 10 times the amount of victories (20 vs 2) of that achieved by North America. On this performance that trend is unlikely to be rectified. 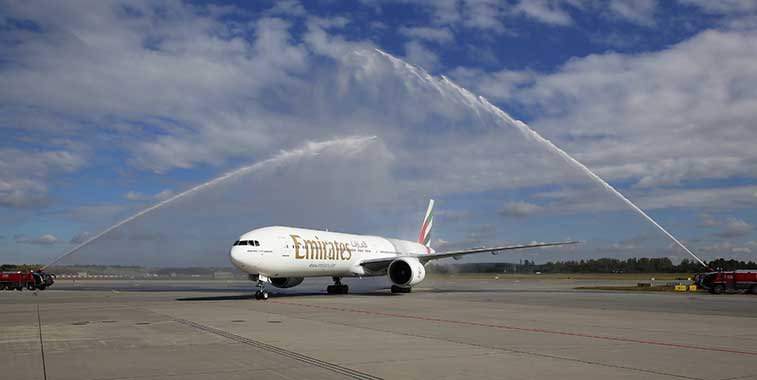 You wait all this time for your second MEB3 carrier and then you give them a ‘Big Boy, Little Boy’ FTWA – really??

Judge’s comments: When one of the world’s blue chip airlines arrives at your airport, the second of the MEB3 to grace you with their presence, you would have been fooled into thinking that an airport’s marketing team would be in hyper overdrive to make sure everything goes perfectly. VIPs looked after (check). New route cake baked (check). World class FTWA showcasing the airport (who was sorting that one out…??). The result of this oversight – a classic ‘Big Boy, Little Boy’. 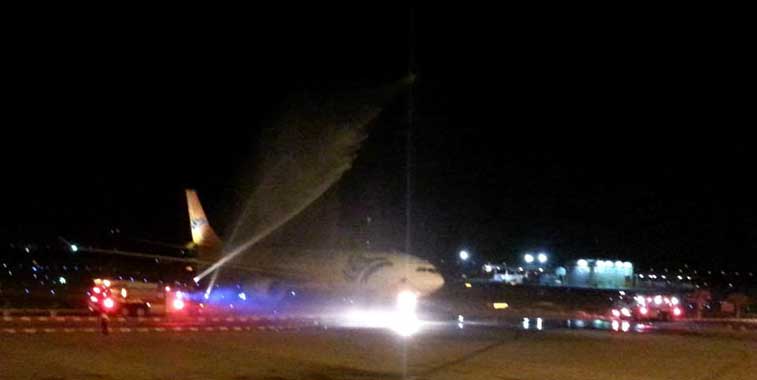 Not much going right with this FTWA from Kuwait, especially as it received the competition’s first ever negative score.

Judge’s comments: Fail to prepare – prepare to fail. Management speak I know, but it still translates in the world of FTWAs. The result is a poorly lit, poorly executed FTWA which has only achieved two things, the first ever overall minus score in ‘Arch of Triumph’ history (so disgusted was one of the anna.aero judges with this effort) and disturbing Kuwait Airport’s firefighters in watching late night re-runs of Friends. And they had just got to that critical episode in the relationship of Monica and Chandler… 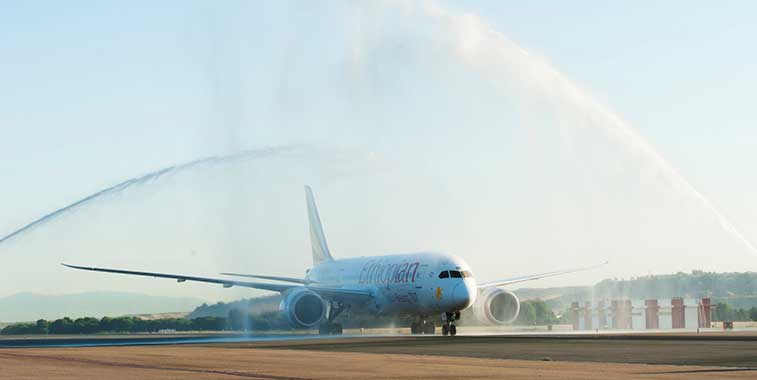 Judge’s comments: Let’s go back to geometric basics. The perfect FTWA is somewhere in a five degree range between 37 and 42 degrees. One of these fire crews has understood these mathematical principles which have been around for millennia. The other hasn’t. One of the fire crews will also be on toilet cleaning duties in the station this week. 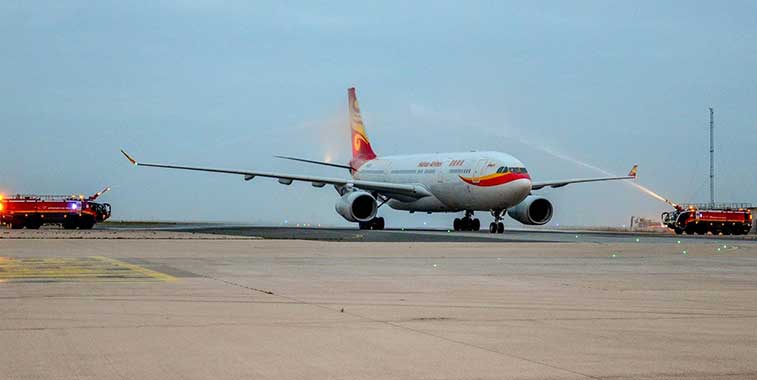 There is a touch of ‘Creping’ to this Parisian ‘Arch of Triumph’.

Judge’s comments: Not only did the early morning mist shroud the Eiffel Tower on 3 September but it also cloaked this Parisian FTWA. That said there is enough here (just about) to suggest that CDG firefighters thought Xi’an was in Korea rather than China, as they have a delivered a classic ‘Gangnam Style’ arch for this inaugural, although there is a touch of ‘Pancaking’ or ‘Creping’ as it is known locally too. 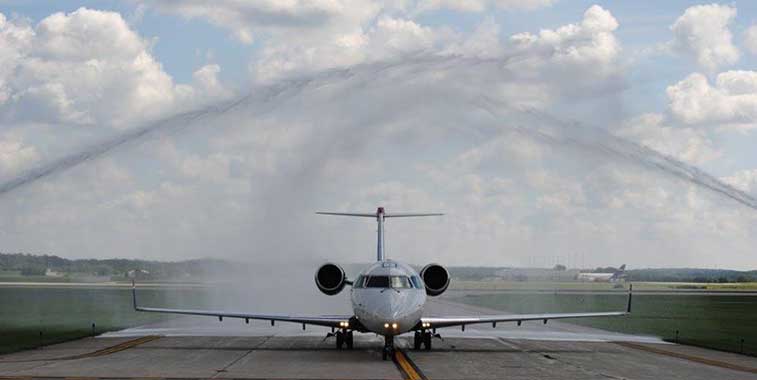 When your airport is named after a water feature surely top class FTWAs are in the fire crew’s blood and souls?

Judge’s comments: There is a hint of a double water arch from the Michigan airport, but thanks to the photographer — who was clearly on his first job at the airport — we will never know. There is also a hint of ‘Pancaking’ with this FTWA, as the arch angle has slipped below the critical 37 degree threshold. 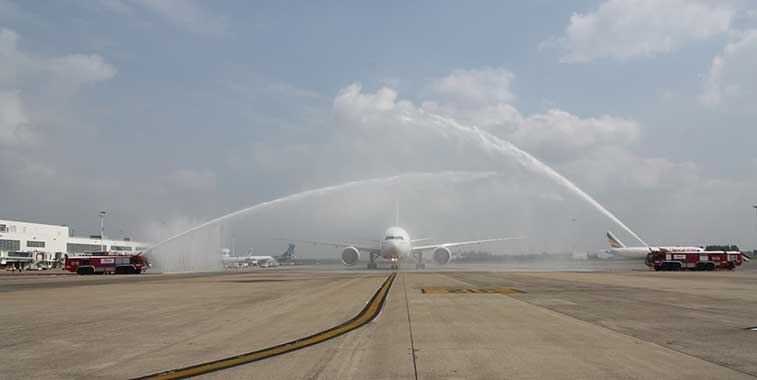 An almost identical FTWA was delivered at BRU for Emirates’ arrival as was provided by the Oslo firefighters earlier in the week for the same airline.

Judge’s comments: This is the sixth entry of the year from the Belgian and European capital airport – more entries than any other airport in the world in 2014 (the closest competitors are Dresden and Montpellier, who have both provided four FTWAs) – so you would think this airport would have refined its FTWAs by now. However, with no wins under its belt for the six provided so far, maybe some on-site training is required. Just to remind any airports wishing to take up this offer, deposits to anna.aero’s Swiss bank account in Zimbabwean Dollars must be paid in advance of the training course.