Aeromar has 0.1% of US-Mexico traffic with three routes to Texas; 18 domestic routes account for less than 2% of market

On 16 January 2014 Aeromar’s third CRJ jet joined the fleet. The airline took the opportunity to give the aircraft a slightly different livery from the rest of its fleet. The aircraft is used on the airline’s two international routes from Mexico City to Austin and McAllen, both in Texas.

Mexico’s Aeromar has been around since the late 1980s offering niche regional services primarily from Mexico City’s main airport. Annual domestic passenger numbers have oscillated between just over 400,000 and just over 600,000 (in 2006) with the airline introducing a handful of international flights to the US in the last 18 months. According to the airline’s website is fleet comprises 14 ATR 42s, two ATR 72-600s and three CRJ 200s, the most recent of which joined the fleet in January. 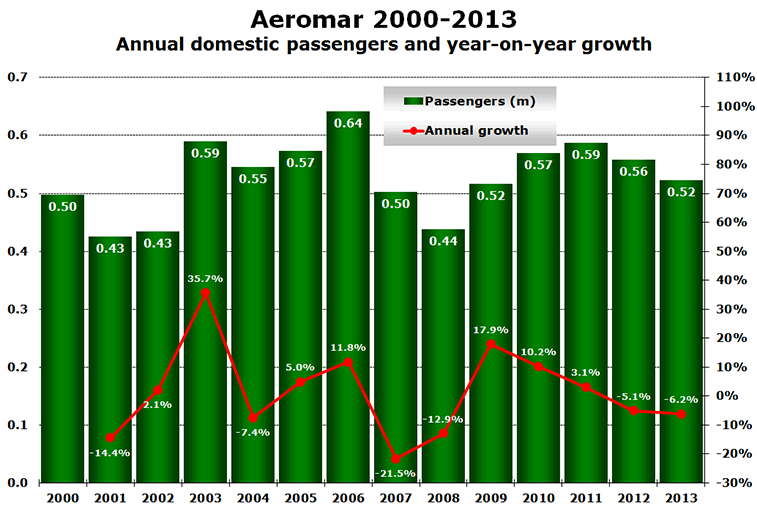 In the first seven months of 2014 domestic passenger numbers are down 1.5% to just over 300,000. According to Mexican government statistics, Aeromar’s share of the Mexican domestic market has been between 1.4% and 1.8% during 2014. Since last September, the airline has dropped two routes from Mexico City (Aguascalientes and Saltillo), as well as links between Toluca and Veracruz, and between Piedras Negras and Saltillo. Only three new routes have been started during the same period:

This leaves the airline operating a total of 21 routes this September. Of these, nine are operated at least twice-daily. On three of the airline’s five busiest routes in terms of weekly frequency there is no direct competition. On other routes competition is provided by Aeromexico and Interjet. 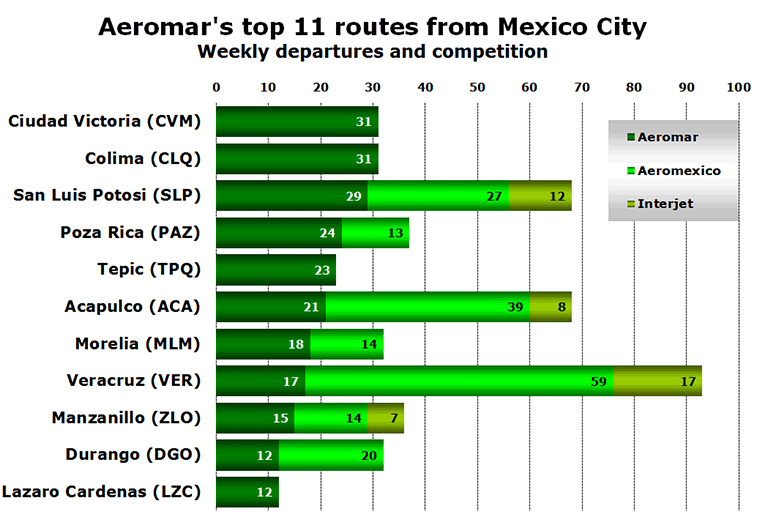 Now operating three routes to US – all in Texas

Aeromar launched its first international route on 18 March 2013 with the introduction of five weekly flights between Mexico City and McAllen-Miller International Airport in Texas using a CRJ. This was followed last October with the start of flights to Austin (also from Mexico City), while November saw a second route to McAllen being introduced from San Luis Potosi. According to government statistics, the airline carried 13,741 passengers on its international network in 2013, giving it a market share of just 0.05% on international routes from Mexico. This has risen to 0.07% in the first seven months of 2014. In July, for the first time it broke through the 0.1% barrier carrying 3,266 passengers on international routes.