Boeing stays in the lead over Airbus as it delivers 60+ units in August; Xiamen Airlines receives its first 787-8 On 30 August, Xiamen Airlines celebrated the delivery of its first 787-8, which will be operated on long-haul routes from its Xiamen base to Europe, North America and Australia. Following the delivery, Xiamen becomes the third Chinese airline to operate this aircraft type, joining existing operations from China Southern Airlines and Hainan Airlines. Signing the delivery agreement in Seattle are: Ray Conner, President and CEO, Boeing; and Che Shanglun, President and Chairman, Xiamen.

After the strongest July since anna.aero began collating delivery data, Boeing stepped up its deliveries in August of this year, while Airbus delivered fewer aircraft. Besides the fact that the American manufacturer maintains its leading position over Airbus in terms of aircraft delivered in the eighth month of the year, Boeing continues to lead the 2014 delivery race by 72 units (up from 48 in July). When compared to the first eight months of 2013, the two producers managed to increase their combined deliveries by 42 units, with 850 aircraft incorporated by carriers into their respective fleets so far in 2014.

Having delivered more than 100 aircraft combined each month since March, the two manufacturers delivered fewer airframes in August. The combined deliveries of both producers for the eighth month of the year, was 98, of which 61 came from the American manufacturer, and 37 from its European counterpart. Noteworthy is the fact that Boeing enhanced its performance when compared to the same month last year, delivering five more units, while Airbus handed over 10 fewer airframes. Overall, 68% of all August deliveries were narrow-body aircraft, which is down 5% from last month’s figures. 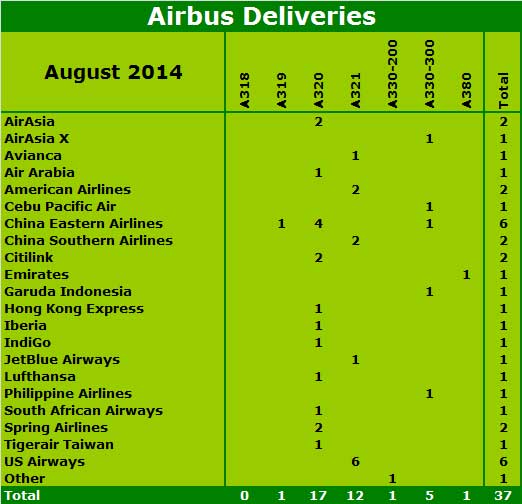 Airbus closed August with a total of 37 units delivered, which constitutes 12 fewer airframes than the amount delivered in July 2014 and 10 fewer than in the corresponding month last year. Over the eight completed months of 2014, the European manufacturer handed over 389 units, representing a decrease of 1.3% (five fewer units) on the same period last year.

Once again, single-aisle deliveries in August were led by the A320 (17 units), with 30 narrow-body aircraft provided to carriers around the world. The oneworld affiliate member, US Airways, was one of the two operators to receive more than two narrow-body units from Airbus, as it incorporated six A321s into its fleet. Besides this, the Shanghai-based carrier — China Eastern Airlines — received four units of the A320. In addition, a total of five carriers saw two Airbus narrow-bodies join their respective fleets in August, namely AirAsia (two A320s), American Airlines (two A321s), China Southern Airlines (two A321s), Citilink (two A320s) and Spring Airlines (two A320s).

Analysis of the wide-body deliveries reveals that Airbus handed over seven airframes in August, accounting for three fewer units than in the preceding month, and two fewer than in the corresponding month of 2013. Following July’s delivery of three A380s, the European producer handed over just one unit of the type in the eighth month of 2014, to the largest operator of A380s — Emirates. In addition, a total of five A330-300s were delivered in August, one each to AirAsia X, Cebu Pacific Air, China Southern Airlines, Garuda Indonesia and Philippine Airlines. On 28 August, Tigerair Taiwan, which is a joint venture between Taiwan’s China Airlines and Singapore’s Tiger Airways, took delivery of its first of 12 A320s ordered. The Taiwanese start-up is gearing up for the launch of daily operations to Singapore on 26 September, and recently announced that it is considering routes to Macau, Hong Kong, Japan and South Korea. 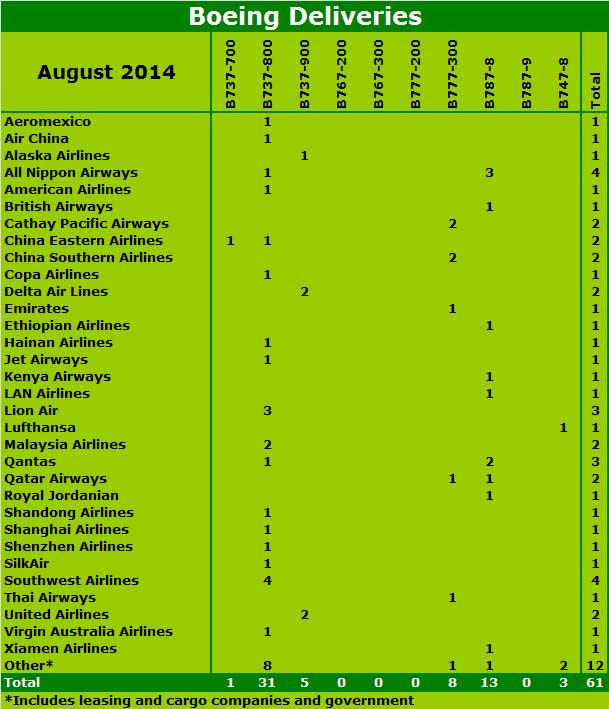 Airlines received a total of 37 single-aisle units from Boeing, two fewer than in the preceding month. The world’s biggest low-cost carrier — Southwest Airlines, was the largest recipient of the 737 family for the fifth consecutive month in August, as it took delivery of four 737-800s. This was closely followed by Lion Air, which incorporated three 737-800s into its fleet. Furthermore, four other operators received more than one single-aisle unit from Boeing, namely Delta Air Lines (two 737-900s), Malaysia Airlines (two 737-800s), United Airlines (two 737-900s), as well as China Eastern Airlines (one 737-700s and one 737-800s).

An impressive 24 wide-body airframes were handed over by the American manufacturer in August 2014, five units more than in July. In addition, Boeing bettered its year-on-year performance, delivering six more wide-body units than the 19 it managed in the corresponding month of 2013. Following the seven and 14 787-8s delivered to carriers in July and June respectively, the American producer continued to clear its backlog with a total of 13 units of the type reaching customers in August. All Nippon Airways and Qantas took delivery of three and two 787-8s respectively, while eight other operators incorporated one unit each into their fleets.