Following the merger of SN Brussels Airlines (the successor to defunct Sabena) and Brussels-based low-cost operator Virgin Express in 2007, the “new” flag carrier of Belgium — Brussels Airlines — was born. Two years later, Lufthansa bought 45% of the carrier. As a result of the new partnership, Brussels Airlines joined the Star Alliance in December 2009. The airline itself promotes the fact that it operates a fleet of 47 units, including 16 A319s, six A320s, eight A330s, 13 RJ100s/RJ85s, three Q400s and one ERJ 145. Based at the gateway to the European capital, Brussels Airlines serves over 60 destinations in 30 countries within Europe, North Africa, North America and the Middle East, according to Innovata schedule data for week commencing 16 September 2014.

The biggest airline at Brussels (where it commands around 32% of all weekly seats this September, followed by Jetairfly and Ryanair with 7.7% and 5.7% respectively), Brussels Airlines carried close to six million passengers last year (a new record high), representing an increase of 2.1% over 2012 figures. In fact, 2013 was an excellent year for the Star Alliance member, as its load factor went up 0.5% and ASKs grew by 5.3%. Nevertheless, with a number of new additions to its network this year, including the resumption of services to Warsaw Chopin on 14 September with 13 weekly flights, Brussels Airlines is likely to continue its growth in 2014. Furthermore, the airline will also commence six weekly flights to Riga starting 26 October. 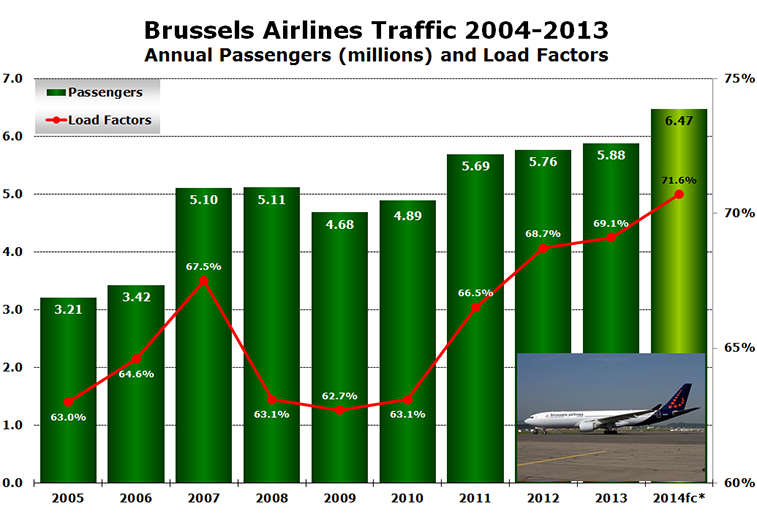 Overall, looking at passenger development from 2007, when the new operator emerged, Brussels Airlines’ traffic posted a decrease of 8.4% in 2009 due to the global economic recession strongly affecting the air transport industry. With that exception, the carrier has achieved growth every year, recording an annual average growth rate (measured in CAGR) of 2.1% over this time frame. In addition, its load factors have fluctuated between 62.7% and 69.1% over this period. In the first seven months of 2014, for which traffic data is already available, the carrier posted an increase of 10% when compared to the corresponding period of the previous year, with 3.7 million passengers achieved until end-July. If the airline continues on this growth trajectory, it would set a new record close to 6.5 million passengers this year, based on anna.aero’s forecast.

Brussels-Geneva is #1 route by seats

According to Innovata schedule for this September, the carrier operates 66 non-stop services, with the top dozen airport pairs accounting for 41% of all weekly seats. Even though it posted a yearly decrease of 3.6%, the 533-kilometre sector to Geneva still accounts for the majority of weekly capacity in 2014, being served with a total of 39 weekly departures from Brussels. Geneva may be the airline’s biggest route, but it competes with easyJet’s 16 weekly flights. Usual suspects (Amsterdam, Frankfurt and Paris CDG) are conspicuous by their absence; however, part of this is down to geography (Brussels is just 160 kilometres from Amsterdam and 300 kilometres from Frankfurt), while CDG is served twice-daily by the carrier’s A320s. The airline’s long-haul network is heavily focused on Africa, a legacy of Belgium’s colonial involvement in the continent, where it serves 12 destinations in 10 countries. 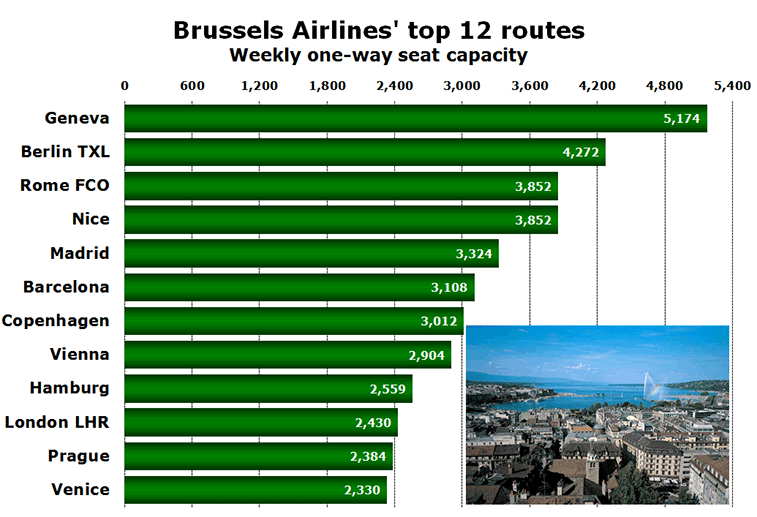 Brussels Airlines’ weekly seat capacity experienced 7.8% growth this September, with seven of the top 12 airport pairs growing, when comparing to data from the corresponding week last year. The link to Venice is the fastest growing route, having increased by 38% or 646 weekly seats in the past 12 months. This comes as a result of the Star Alliance member having replaced 16 of its weekly RJ100 operations with A319/A320 flights. By comparison the Brussels-London Heathrow airport pair provided the greatest capacity decrease (-8%).

Brussels Airlines flies to a total of 30 countries in Europe, North Africa, North America and the Middle East, based on Innovata schedule data for this September. The airline’s top 12 country markets account for 82% of all weekly seats this summer, which is down 2% from last year’s figures. Following a yearly increase of 11% this September, Italy still accounts for the majority of weekly capacity, being served with a combined 190 weekly flights to Bologna, Catania, Rome Fiumicino, Florence, Milan Linate, Milan Malpensa, Naples, Palermo, Turin and Venice. The United States is the only country market in this year’s ranking (highlighted in bright green) served by Brussels Airlines outside Europe. The airline operates services from its hub to Washington Dulles and New York JFK. 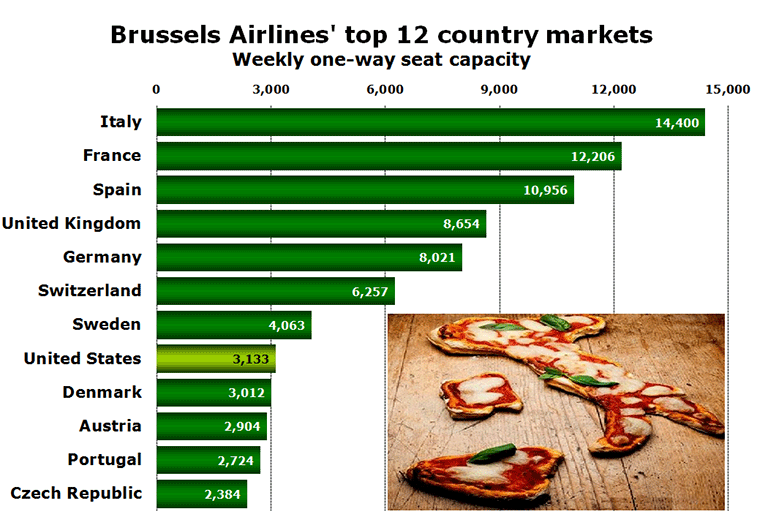 A total of eight of the top dozen country markets experienced growth this month, while the carrier’s operations to US have remained unchanged. The stand out performance is that emanating from services to Spain, having increased by 16% or 1,499 weekly seats in the past 12 months. Besides the fact that Brussels Airlines increased its frequency to Malaga from twice-daily to 17 times weekly, the Star Alliance carrier also commenced thrice-weekly flights to Seville on 1 April and to Alicante on 26 October 2013. On the other hand, Switzerland witnessed the greatest capacity decrease (-2.8%).