Touchdown! Cebu Pacific Air became the latest carrier to venture into the Australian air travel market when it arrived in Sydney on 9 September from Manila. The Philippine carrier will operate four weekly flights using its growing fleet of A330-300s.

Demand for air travel within Australia has grown by just 1.0% to 57.7 million passengers in the year ending June 2014. The country’s international air travel sector showed rather healthier growth, up 6.8% to 31.4 million in the same period. Double-digit international growth was reported in both January and April 2014, with the re-timing of Easter being a likely contributing factor in the latter month.

Among the country’s top 10 domestic routes, eight reported growth in the year ending June 2014 (the latest available data), with Melbourne-Adelaide (+6.0%) leading the way, and only Melbourne-Gold Coast (-1.3%) and Melbourne-Perth (-1.0%) reporting declines. With almost 8.3 million annual passengers, the Sydney-Melbourne route remains by far the country’s busiest air route (and one of the busiest in the world), but grew by just 1.0% in the last 12 months. 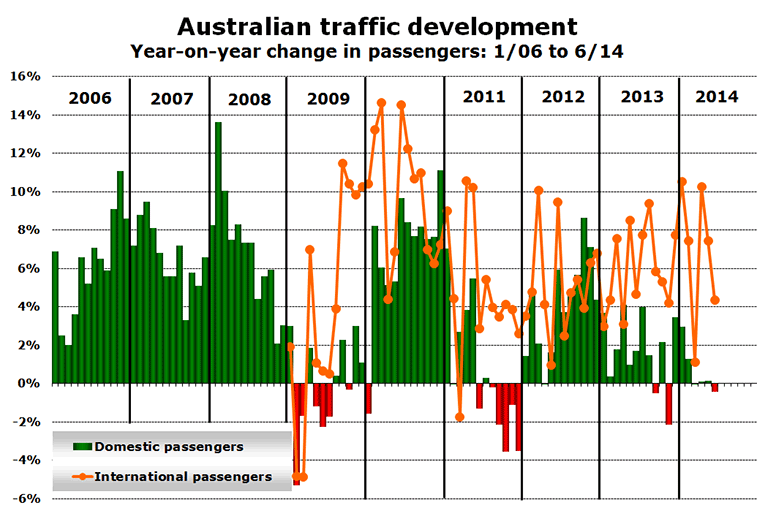 According to the latest BITRE figures for June 2014, Qantas has just 15.8% of the international market followed by Emirates (9.6%). Singapore Airlines is in third place with 8.9%. Combining Qantas and Jetstar Airways still gives the Qantas Group of airlines less than one-quarter of the Australian international market. The biggest gainer in terms of market share is AirAsia X which has increased its share from 3.0% in June 2013 to 4.6% in June 2014.