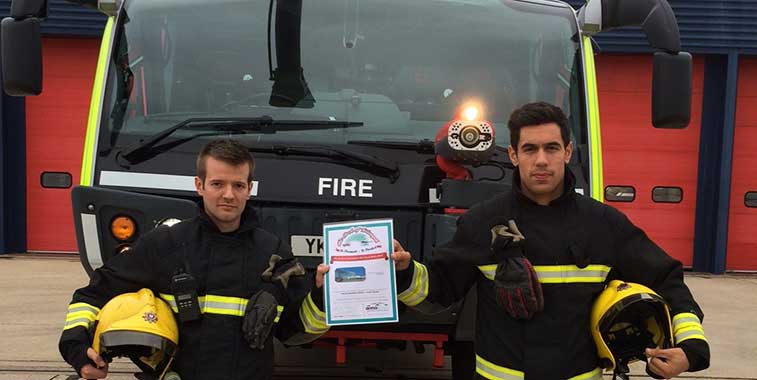 “There’s a big spider on your jacket. I hate spiders.” “I know, there’s one on yours too, but we’re having our picture taken now. And the marketing guys will be cross if we don’t look all tough and macho.” London Gatwick’s firefighters Ryan Baker and Theo Van Der Lugt, hold the ‘Arch of Triumph’ certificate presented for last week’s FTWA at the launch of Garuda Indonesia’s new Jakarta service, before using the tender parked behind them to ‘deal’ with the huge arachnids climbing up their fire jackets.

This week’s winner is a case of third time lucky. The winning FTWA was Sydney’s second entry of 2014, and its third overall, with Australia’s busiest airport having sent the anna.aero judges its efforts for the launch of Sichuan Airlines’ service from Chongqing in January this year, as well as competing in the first ever ‘Arch of Triumph’ when Air India started serving the airport again in September last year. Sydney’s victory also gives Australasia its first ever Arch of Triumph win in the global inter–regional battle that has already been secured by Europe for 2014. That said, with a couple more wins in what remains of 2014, the region could still gain a creditable #3 spot in the competition. More significant is the impact the Sydney FTWA has had on the overall leader board — its tally of 37.6 has seen the Australian airport leap straight into second spot (see table below). For those of you heading out to World Routes in Chicago later this week, a comprehensive review of this year’s competition will be included in Monday’s Show Daily magazine — along with an FTWA guide. Keep Monitoring!! U-beaut! We love aerial shots of FTWAs – always worth an extra couple of points – just for the extra effort.

Judge’s comments:  Strewth! FTWA pictures from a helicopter – what a ripper! While we are certain that the image is fair dinkum and the photograph is bonzer, but the overall ensemble is let down slightly by the somewhat imbalanced attempt at a four-jet water arch from the two tenders. A bit bodgy you might say (in Sydney). That said, the marketing effort put into celebrating this new route has certainly come good. Good onya Sydney ARFF. 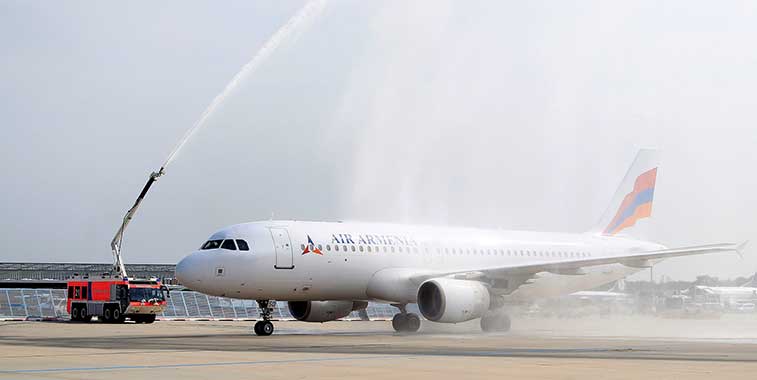 We’re so close to this FTWA we can almost feel the spray on our faces.

Judge’s comments: anna.aero’s judges loved the intimacy of this shot, almost all of us felt like we were there in Frankfurt. However, we’re so close we can’t see 60% of this FTWA. Interestingly the German hub is the only one of the so-called European FLAP airports (Frankfurt, London Heathrow, Amsterdam, Paris CDG) to have won the coveted Arch of Triumph in 2014. However, Frankfurt will not be adding to its tally this week. 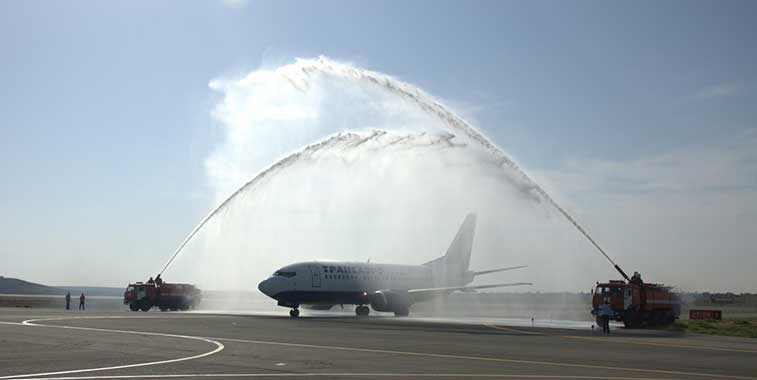 This type of FTWA is known locally as a ‘fish pie’. Unfortunately only the fair people of Astrakhan are aware of this distinct style of water arch.

Judge’s comments:  Some of you may know that Astrakhan is considered as a favourite place for fishermen in Russia. So much so that when this Transaero flight launched from Moscow Domodedovo this week, the airport’s marketing mix included a famous fish pie at the check-in celebrations. So it was no surprise to see the Astrakhan firefighters emulating the gastronomic delight in their FTWA. хорошее усилие. 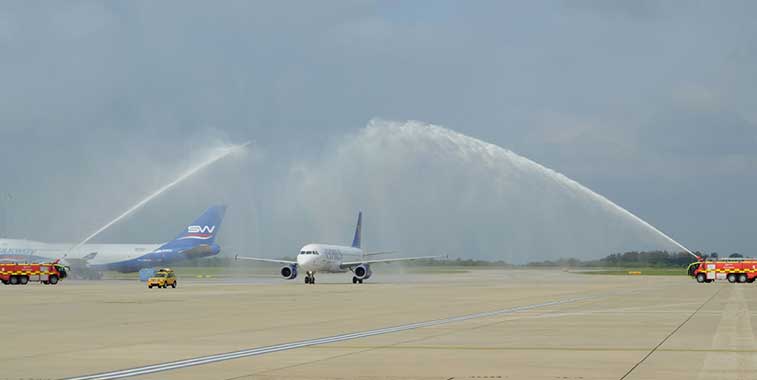 Judge’s comments:  One phrase that most foreign tourists leave London having mastered is the iconic phrase uttered almost every time the doors open or close on the London Underground — ‘Please mind the gap’ — which is the safety message encouraging users of the subterranean railway system not to fall onto the electrified tracks and cause commuters to briefly break from their newspaper/book/Kindle and tut, before continuing to read while shaking their collective heads. This FTWA — complete with a clear 5.4m gap — is clearly London Stansted’s attempt to start this safety briefing early, even before Cypriot tourists have left the aircraft.