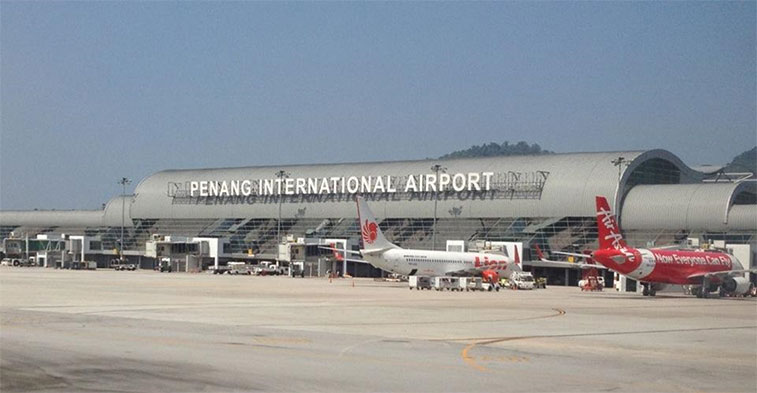 Penang International Airport in north-west Malaysia is becoming a battleground for the region’s LCCs. AirAsia and its related airlines are the dominant force, but other LCCs such as Lion Air (of Indonesia) and Malindo Air (Lion Air’s Malaysian joint venture) have been growing at the airport which is on track to handle over six million passengers in 2014.

The relatively small state of Penang in north-west Malaysia consists of two parts; Penang Island located in the Straits of Malacca, and Seberang Perai on the main Malaysian peninsular. Penang International Airport is located on the southern tip of Penang Island and has seen its traffic grow impressively by 65% in the last four years, thanks primarily to the growth of the region’s LCCs such as AirAsia. Penang Island is home both to a major city (George Town) and also to several beaches, which attract national and international tourists. 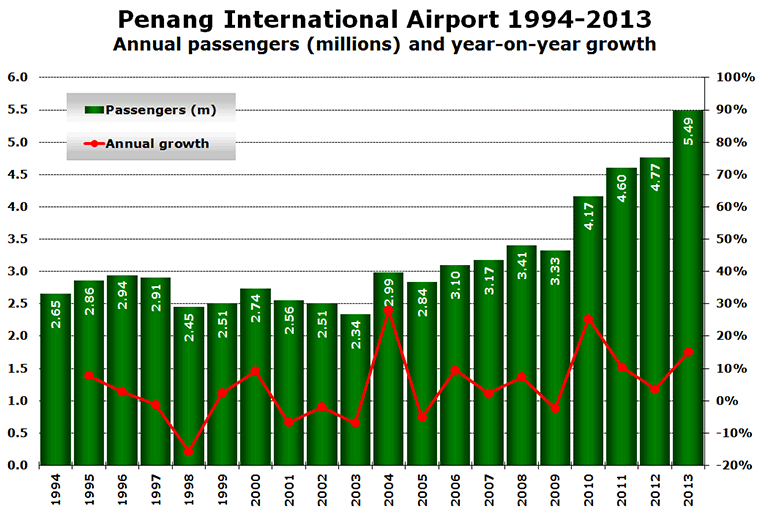 Penang International Airport (PEN) is currently Malaysia’s third busiest airport overall after Kuala Lumpur (KUL) and Kota Kinabalu (BKI), but is ranked second in the country for international traffic with 2.42 million passengers in 2013. Figures for the first quarter of 2014 indicate that passenger numbers have grown again, by over 18%, suggesting that demand will likely pass the six million mark this year, considerably above the airport’s terminal design capacity of five million passengers.

Not surprisingly, Kuala Lumpur is by far the airport’s busiest route in terms of flights and weekly seats. Between the two airports serving the Malaysian capital there are over 300 weekly departures and over 35,000 seats each way. The leading international routes are to Singapore (served by four airlines), and Medan in Indonesia, which is just 238 kilometres away, and is served by five airlines. 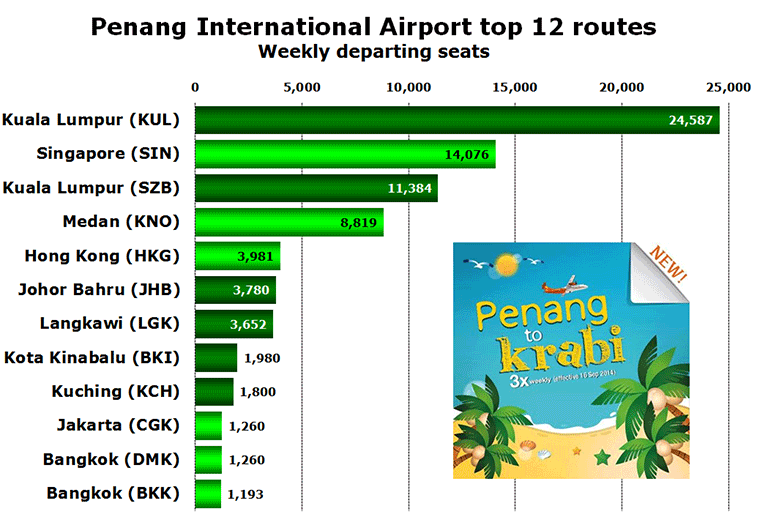 During the last 12 months new services have been started by a number of carriers, with two new services beginning this week.

Krabi in Thailand is another short sector at just over 330 kilometres to the north. Across all airlines, weekly seat capacity for September 2014 is up just under 8% compared with the previous September, with the number of flights up almost 10%, with Krabi and Miri the only two new destinations added to the airport’s network.

Based on analysis of current scheduled seat capacity, the AirAsia Group of airlines account for over 42% of seat capacity at the airport. Malaysia Airlines and its regional subsidiary firefly account for a further 25%, while Indonesia’s Lion Air and its Malaysian joint venture airline Malindo Air represent a further 13%. A total of 16 airlines currently operate scheduled service at the airport, with China Airlines operating the longest sector to Taipei (3,130 kilometres), followed by China Southern Airlines’ 2,414-kilometre route to Guangzhou, the airport’s only non-stop service to China. 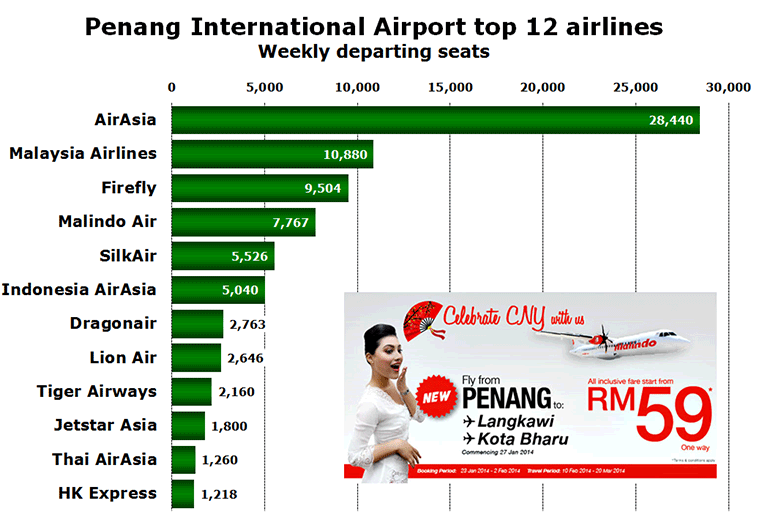 Three airlines have withdrawn service from the airport during the last 12 months. These are: Berjaya Air, which suspended its turboprop flights to Kuala Lumpur Subang at the end of March; Cathay Pacific Airways, which transferred its Hong Kong service to its subsidiary Dragonair; and Garuda Indonesia, which has suspended its only service from Medan.