Emirates #1 player in Middle East-Africa market; ASKs increase by 14%; Seats not far behind on 10% growth 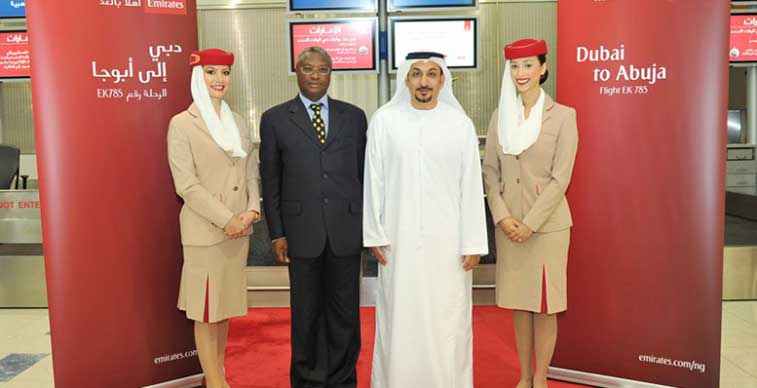 Emirates has been busy adding services between the Middle East and Africa. One of its latest additions came on 1 August, when it began services to its 21st African non-stop destination, linking its global hub in Dubai with daily flights to Nigeria’s capital city Abuja, its second destination in Nigeria. This service has contributed to double-digit increases in ASKs and seats between the two regions in the last 12 months.

There are not many global region pairs which can boast posting double-digit annual growth, but the Middle East to Africa is an exception, posting a 14% growth in weekly ASKs and a 10% hike in weekly seats in the last 12 months. While there was only a 5.5% increase in weekly flights, connections between the two regions have passed 1,500 per week for the first time ever.

The #1 country market pairing, between Saudi Arabia and Egypt, both the third largest countries by population in their respective regions, has posted modest annual growth of 5.4%. This is perhaps reflected by the fact that this particular country paring is responsible for 26% of all flights between the two regions and could therefore be considered as mature. Indeed, the top 12 country pairs command 68% of all flights, which is up marginally from 67% last year. 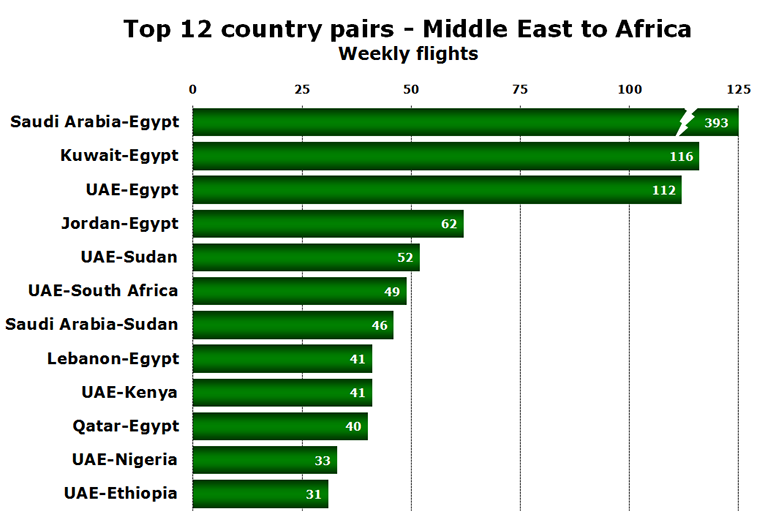 The fastest growing country pair (+57%) is UAE to Nigeria, which has witnessed an extra 12 weekly flights over the last year – Emirates’ daily service to Abuja from Dubai (started on 1 August) and Arik Air’s five times weekly (started 29 July) operation on the same city pair. Only two country pairings have shown an annual decline, the first being a marginal reduction (-1.6%) on flights between Jordan and Egypt, the fourth largest overall. The second market pairing reduction is more significant, with flights between Qatar and Egypt falling by over 18%. According to Innovata schedules for the same week in 2013 and 2014 (w/c 1 October), both EGYPTAIR and Qatar Airways have trimmed flights – the former reducing its double-daily operation between Cairo and Doha to 13 times weekly, while Qatar Airways has reduced its capacity on the same city pair from thrice-daily to 16 times weekly, and its daily flights to Luxor have also seen the sharp end of the network planner’s knife, being cut to four times weekly in the past 12 months.

The top 12 routes represent over one-third (36%) of all seats between the two regions, and as previously suggested, there has been a double-digit increase in weekly seats in the last year. Links to Egypt dominate, with half involving the North African country, and five of those six having the capital Cairo at one end of the route. Unsurprisingly EGYPTAIR is the busiest carrier in the top 12, being a serving carrier in all six of these markets. Emirates was the #2 participant in this analysis, being present in five of the 12 city pairs. 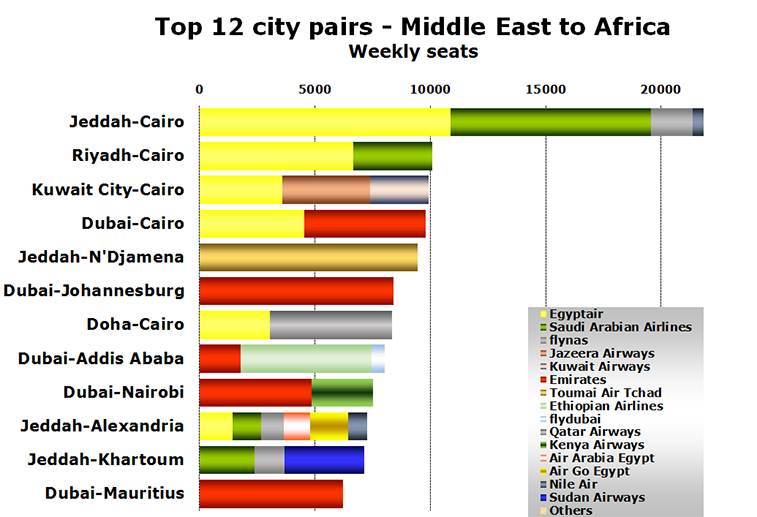 The #1 and the #10 markets, those operated between Jeddah and Cairo and Alexandria, both have six serving carriers – including EGYPTAIR, Saudi Arabian Airlines, flynas, Nile Air, with all four airlines serving both city pairs. One of three ‘monopoly’ routes is that of N’Djamena to Jeddah, which is served by Toumai Air Tchad only. However, the importance of this route is only of a temporary nature, as the high levels of capacity on the 2,773-kilometre sector is predominantly being flown due to the fact that the week being analysed (w/c 1 October) happens to fall during the Islamic Hajj pilgrimage period.  As a result, the carrier is flying up to five times daily on the city pair during this week, some with a leased high-density configured 747.

MEB3 masters 55% of the market

Not only do the top 12 airlines command 86% of the weekly ASKs between the Middle East and Africa global regions (up marginally from 85% last October), but the MEB3 (Emirates, Etihad Airways and Qatar Airways) also take the lion’s share of this particular metric, with nearly 55% of total weekly ASKs in their hands. However, it is the Middle Eastern LCCs, and in particular Air Arabia and flydubai, which have perhaps been driving much of the 14% growth in ASKs. In the past 12 months, the Sharjah-based Air Arabia has more than doubled its flying programme to Africa (up 113%), but this was not enough to topple flydubai as the #1 LCC operating between the two regions, which delivered a far from sluggish growth of 69% in ASKs. Indeed, the remaining two LCCs in the top 12 were also very active in the last year, with Jazeera Airways adding 59% and flynas 23%. 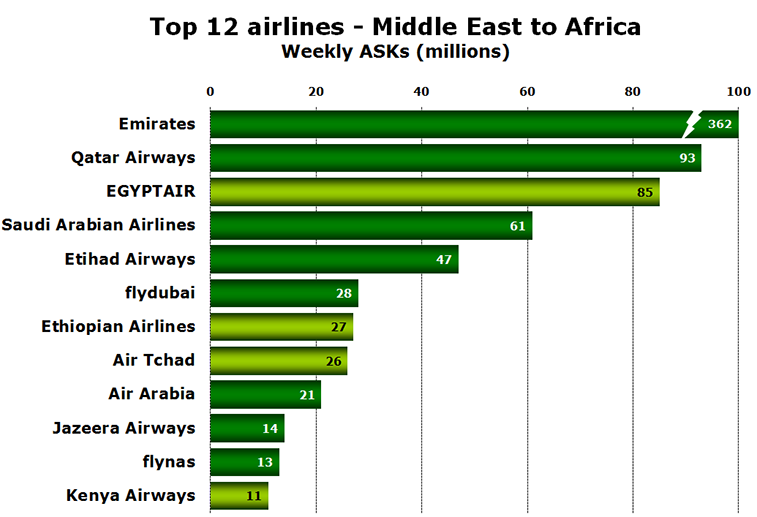 In contrast to the fast-growing LCCs, the MEB3 have offered a mixed bag of results. Emirates leads the MEB3 carrier’s increased commitment to Africa, posting a 19% hike in ASKs and easily beating the modest 2.8% growth of Qatar Airways, while Etihad has actually trimmed its flying by 5%. When combined with Saudi’s 30% ASK growth, this has resulted in Etihad slipping to #5 spot. However, the biggest ASK cull emanated from Cairo, with EGYPTAIR making a double-digit clip (-12%) of its capacity, and in the process seeing Qatar Airways leapfrog it into second place. No matter the jostling for position between the top 12 carriers in the Middle East to Africa market, this dynamic market seems well positioned for continued growth, as long as global events don’t interfere in its progress.