On 11 April Far Eastern Air Transport launched twice-daily services from Taichung to Makung, located on Penghu Island off Taiwan’s west coast. Despite being on sale on the airline’s website, albeit now seemingly reduced to a daily service, this domestic operation is not found in the carrier’s Innovata schedule data.

Far Eastern Air Transport (shortened to FAT), the Taiwanese carrier originally established in 1957, operates a fleet of eight MD-82 and MD-83s (according to Planespotters.net), and having been declared bankrupt in 2008 the airline is continuing its network rebuild since it restarted operations again in 2011. In that time its annual ASKs have grown from 121 million in 2011 to the 513 million planned by the end of 2014.

Today its scheduled network is seemingly focused entirely on low-weekly frequency links into secondary and tertiary Chinese cities from four Taiwanese airports. However, when reviewing on-sale city pairs on FAT’s website, the carrier appears to also offer some domestic routes, including the recently launched (11 April) Taichung to Makung operation. In addition to this flying, the airline does operate a significant amount of charters from Taiwan to points in Cambodia, South Korea, Philippines and Vietnam. The following analysis merely reviews the information which has been submitted to Innovata’s Diio Mi schedule data.

Over the last 12 months, a 44% expansion in flights at Kaohsiung has seen Taiwan’s second city leapfrog Taipei’s Taoyuan in terms of importance for FAT. When comparing schedules for 1-7 October 2013 with the same week in 2014, the airline has grown its network at Kaohsiung from four to six destinations. While Nanchang (weekly), Guilin (twice-weekly), Taiyuan (weekly) and Wuhan (weekly) have been added, Guiyang and Nanning have been removed. The gap between the top two airports has been exacerbated by the fact that services from Taipei Taoyuan have been reduced by 11% year-on-year. The airline’s four Taiwanese bases are highlighted by the dark green bars on the graph below. 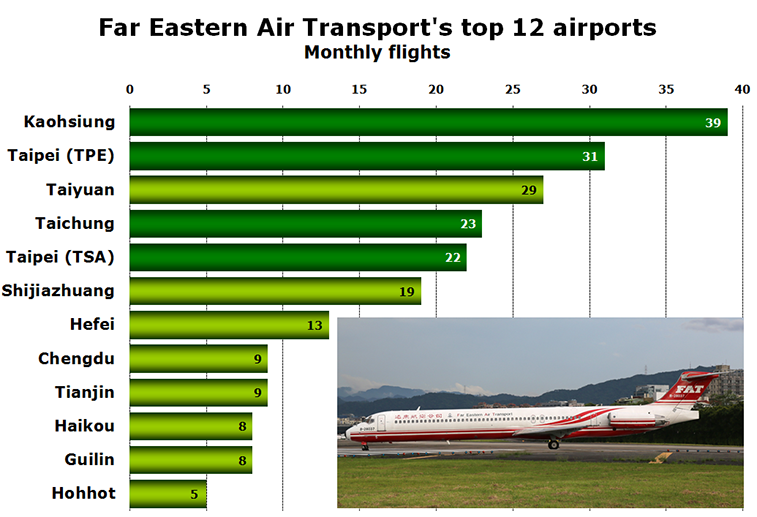 The airline’s resurgence does seem to be being driven by adding new spots to its network, with five (Taichung, Chengdu, Tianjin, Guilin and Hohhot) of FAT’s top 12 airports being new when compared to the same period last year. Indeed, since last October the carrier’s network has grown to a total of 16 destinations, with services to Nanchang, Harbin and Wuhan also being commenced along with those previously mentioned. Last year’s network of 12 destinations has seen the demise of Guiyang and Nanning from FAT’s flying programme.

Only four of the airline’s top 12 city pairs have been retained since last year (highlighted in light green). Three of those routes, Taipei Songshan to Taiyuan, Kaohsiung to Chengdu and Taipei Taoyuan to Hefei, have seen no growth in the number of seats since last October. FAT’s top city pair has however seen a small increase of 7.7% year-on-year. 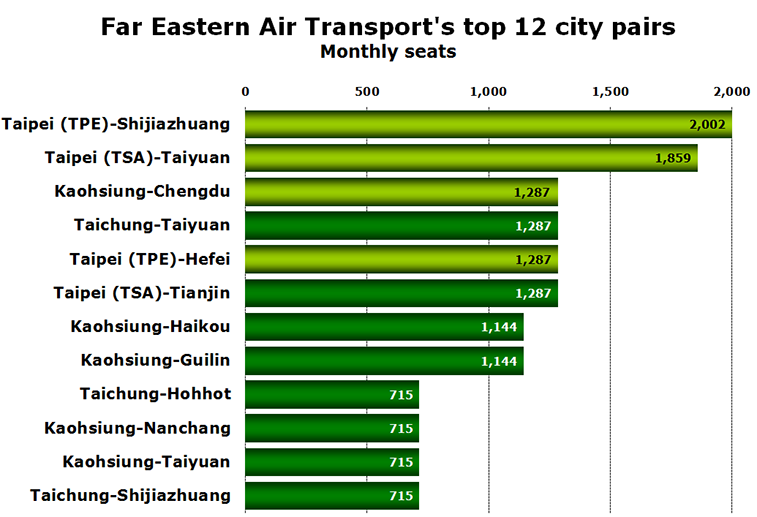 On 22 September, FAT started weekly operations between Taichung in Taiwan and Hefei in China. Referring to anna.aero’s New Route Database, the airline currently has no pending route launches planned for the W14/15 and S15 operational seasons.