On 3 July, Europe Airpost landed for the first time at Halifax Airport with weekly flights (Thursdays) from Paris CDG via Glasgow. The airline’s first route outside Europe was operated utilising its 134-seat 737-700s until 28 August.

Established in 1960, Halifax Airport is the primary gateway to one of Canada’s three maritime provinces — Nova Scotia, having a population of around 914,000. Perhaps better known as Halifax Stanfield International Airport due to being named in honour of the 17th premier of Nova Scotia — Robert Stanfield, the airport is ranked as the country’s seventh busiest airport according to anna.aero’s American Airport Traffic Trends database, behind Ottawa, but above Winnipeg. Situated on the Great Circle Route, Halifax is the closest major North American continental point to Europe and the only airport in Atlantic Canada to offer US preclearance and Canada customs services on a 24/7 basis. Operated by Halifax International Airport Authority (HIAA) since 2000, Halifax offers 26 non-stop services flown to six countries within North America and Europe, according to Innovata schedule data for this October. 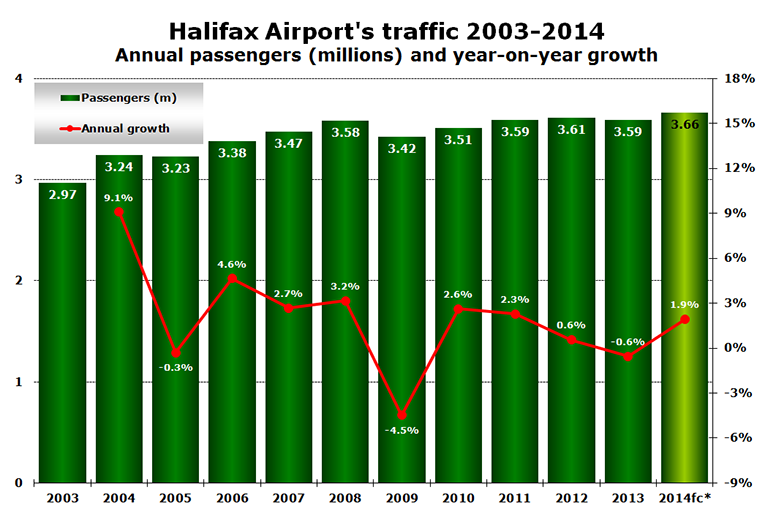 Analysis of data facilitated by HIAA reveals that passenger traffic at Halifax has slightly grown between 2003 and 2013, with an annual average growth rate (CAGR) of 1.7% over this timeframe. Around three million passengers used the airport 11 years ago, a number that increased to 3.6 million last year. In fact, Halifax grew every year, with the exception of 2005 and 2009, when decreases of 0.3% and 4.5% respectively were recorded. In addition, the airport’s traffic reported a modest decline of 0.6% last year. In the first eight months of 2014, for which traffic data is already available, Halifax posted an increase of 1.9% when compared to the corresponding period last year, with 2.5 million passengers handled by end-August. If the airport continues on this growth trajectory, it will achieve around 3.7 million passengers this year, based on anna.aero’s forecast.

Air Canada dominates with 58% and 66% of seats and flights

Evaluation of Innovata schedule data for this October indicates that a total of 10 airlines are serving Halifax, with Air Canada maintaining its top position. The Star Alliance member accounts for 58% and 66% of weekly seats and flights respectively and operates a total of 14 airport pairs from Halifax, of which Toronto Pearson is the most frequently served destination. Ranking second with a weekly seat share of 23%, WestJet — the only low-cost carrier at the airport — connects Halifax to five domestic destinations, namely Hamilton, Ottawa, Calgary, St. John’s and Pearson. 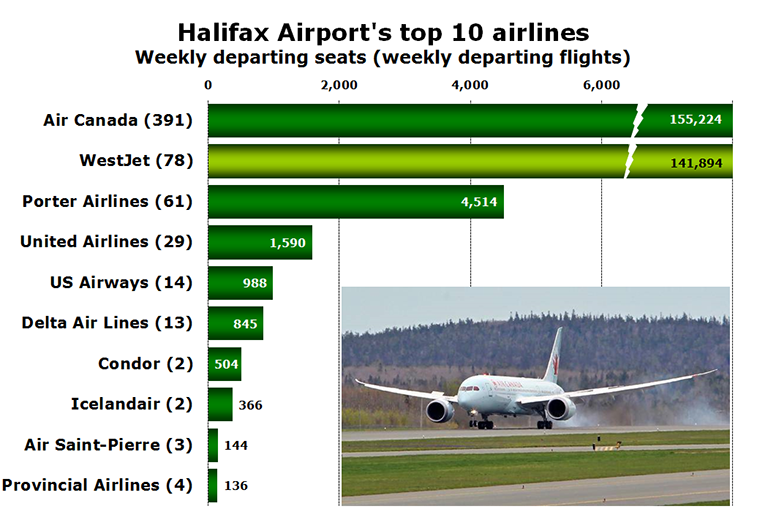 Weekly seat capacity has gone up 1.8%, with Air Canada (+1.2%), WestJet (+7.3%), United Airlines (+0.8%) and Provincial Airlines (+51%) noting growth, while Icelandair and Air Saint-Pierre saw their operations unchanged (when comparing data from this October with the same week last year). Noteworthy is the fact that the primary gateway to Nova Scotia has seen the arrival of two new seasonal carriers this summer, namely Canadian North’s weekly flights to both St. John’s and Iqaluit until 5 September and Europe Airpost’s weekly operations from Paris CDG flown via Glasgow until 28 August.