Hong Kong’s latest route launches are the 2,602-kilometre sector to Nagoya in Japan and the 1,379-kilometre airport pair to Zhengzhou in China, which were launched on 18 and 26 September respectively by HK Express — the fastest-growing carrier at the airport.

Covering an area of 1,100 square kilometres (around 100 times smaller than the size of Iceland), the autonomous region of Hong Kong is inhabited by over seven million people, being classified as one of the most densely populated areas in the world. Originally part of the British Empire, Hong Kong was handed over to the People’s Republic of China in July 1997, and became the first special administrative region (the second being Macau in 1999) under the principle of “one country, two systems.” Nonetheless, Hong Kong has made it into the global press this week due to the protests centred on Bejing’s decision to impose limits on how the region elects its leader.

The air transport industry has played a significant role in supporting the economic growth of the region, with Hong Kong ranking as the third most important global financial centre, after London and New York. The region is being served by Hong Kong International Airport, also known as Chek Lap Kok to distinguish from its predecessor — the now-closed Kai Tak (since 6 July 1998). Under operational control of the Airport Authority Hong Kong, the airport offers 139 non-stop services flown to 42 countries within every continent – except South America (according to Innovata schedule data for this October). Furthermore, the major international gateway serves as an operating base for Cathay Pacific Airways, Dragonair, Hong Kong Airlines and HK Express, with the latter having expanded recently with two new links to Nagoya in Japan and Zhengzhou in China.

Following the replacement of the legendary Kai Tak, Hong Kong has seen its passenger numbers climbing from under 30 million in 1998 to 48 million in 2007, while last year it recorded close to 60 million (representing an increase of 6% over 2012 figures). As a matter of fact, the airport ranked 11th in the world last year according to ACI, seeing it overtake Frankfurt, which grew slightly by just 0.9%. 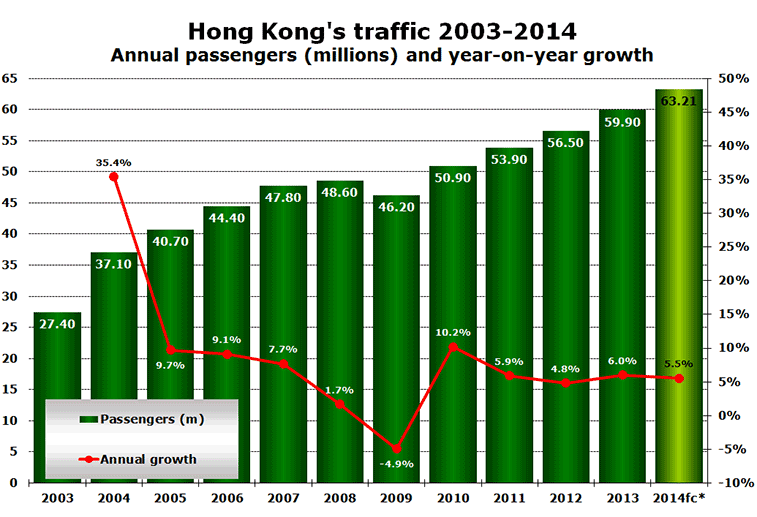 Analysis of data facilitated by the airport authority reveals that passenger traffic at Hong Kong has grown impressively between 2003 and 2013, with an average annual growth rate (CAGR) of 7.4% over this timeframe. The airport handled a new record high of close to 60 million passengers last year, a result that has increased dramatically from the 27 million recorded 11 years ago. Overall, Hong Kong saw growth since 2003, with the exception of 2009, when it noted a decrease of 4.9% due to the Asian economy shrinking. In the first eight months of 2014, for which provisional traffic data is available, the airport posted an increase of 5.5% when compared to the corresponding period of 2013, with 42 million passengers achieved until end-August. Therefore, the airport will definitely surpass 60 million passengers this year.

As of October 2014, Hong Kong is served by a total of 80 carriers, with Cathay Pacific still being the dominant player serving the region, as it commands 31% and 26% of weekly seats and flights respectively. Noteworthy is the fact that Cathay Pacific is two times larger than the second operator — its wholly-owned subsidiary Dragonair. The de facto international flag carrier of Hong Kong, which carried over 21 million passengers last year, operates a total of 48 airport pairs, of which the 779-kilometre airport pair to Taipei Taoyuan is the most frequently served route (116 times weekly). Looking at Innovata schedules for this October, the top 12 carriers serving the Hong Kong market account for 74% of all weekly seats, 1% fewer that in the corresponding month of 2013. 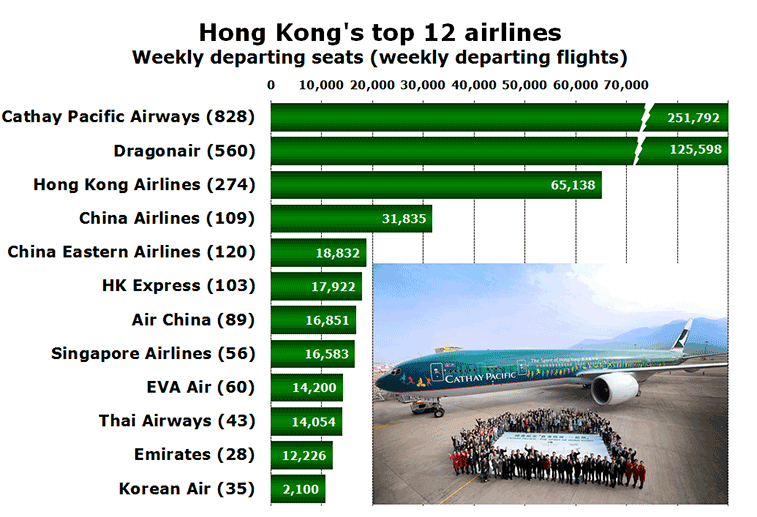 Total weekly seat capacity at Hong Kong has gone up 6.5%, with nine of the top dozen airlines recording growth, when comparing data from this October with the same week last year. Celebrating one million passengers last week since the airline’s transformation into a low-cost carrier in October 2013, HK Express is the fastest growing carrier at the airport, managing to increase its weekly capacity by 43% or 5,401 seats over the last 12 months. In fact, the airline has witnessed a major network rationalisation following the change of its business model. Kota Kinabalu, Taichung and Chiang Mai are the only destinations operated this month that were also served last October, while the carrier now offers a network of 14 routes from Hong Kong. On the other hand, Thai Airways experienced the greatest capacity decline (-16%), due to reducing its frequencies to Bangkok Suvarnabhumi and Phuket. On 24 September, HK Express celebrated one million passengers since it changed its business model last October. The lucky passenger was Corgi Wing-yi Hui, who was travelling to Tokyo Haneda. The same day, the LCC announced it will add a second daily flight to Haneda starting on 16 November.