On 31 March 2012, SATA International commenced operations on the 1,794-kilometre sector from Porto to Munich, a route still operating this October. This is the airline’s second German destination after Frankfurt.

SATA International is a Ponta Delgada-based carrier, which was established in 1990 under the name of OceanAir. Four years later, SATA Air Açores became the major shareholder in the carrier when OceanAir suspended operations. A wholly-owned subsidiary of SATA Air Açores, the carrier commenced operations in March 1998 as SATA International, since when it has operated both scheduled and charter flights to destinations within Europe and North America. The airline itself promotes the fact that it operates a fleet of eight units, namely four 222-seat A310-300s and four 165-seat A320s. 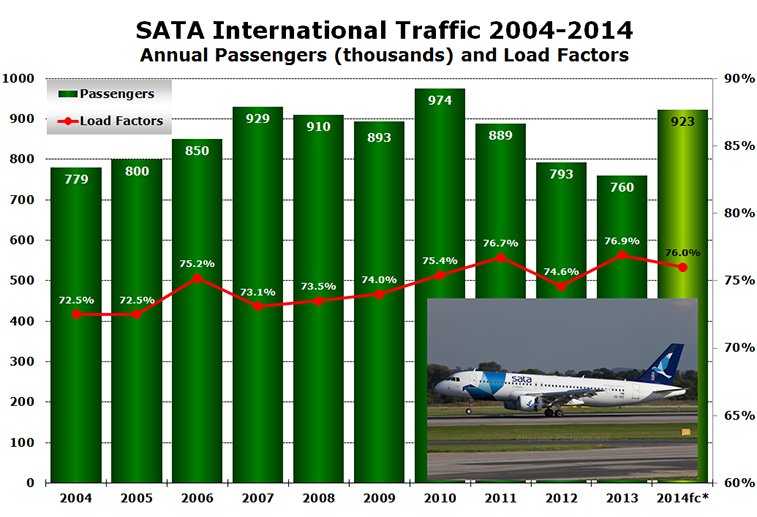 Examination of passenger data between 2004 and 2013 reveals that the airline has had a fluctuating pattern as a result of its diverse operating strategies each year, while its load factors have oscillated between 72.5% and 76.9% over this period. When reviewing the airline’s 2013 results, SATA International carried 760,000 passengers, representing a decrease of 4.2% over 2012 figures. In the first six months of 2014, for which passenger data is already available, the carrier’s traffic has increased by 21% (when compared to the corresponding period of the previous year), with 553,000 passengers achieved until end-June. If SATA International continues on this growth trajectory, it would achieve around 923,000 passengers this year, based on anna.aero’s forecast.

Ponta Delgada-Lisbon is #1 route by seats

According to Innovata schedule data for this October, the carrier operates 17 non-stop services to a total of eight countries in Europe and North America. SATA International’s main base is at Ponta Delgada, from where it operates a network of nine routes this month, of which Lisbon — one of its focus cities — is the most frequently flown destination, being operated 17 times weekly. In fact, SATA International is the dominant carrier at the gateway to the administrative capital of the Autonomous Region of the Azores, featuring a seat share of 54%, above its parent company SATA Air Açores, which offers just 39% of all weekly capacity. In terms of its most significant services, the top 12 routes account for 91% of all weekly seats, representing a modest increase of 1.5% from last year’s figures. 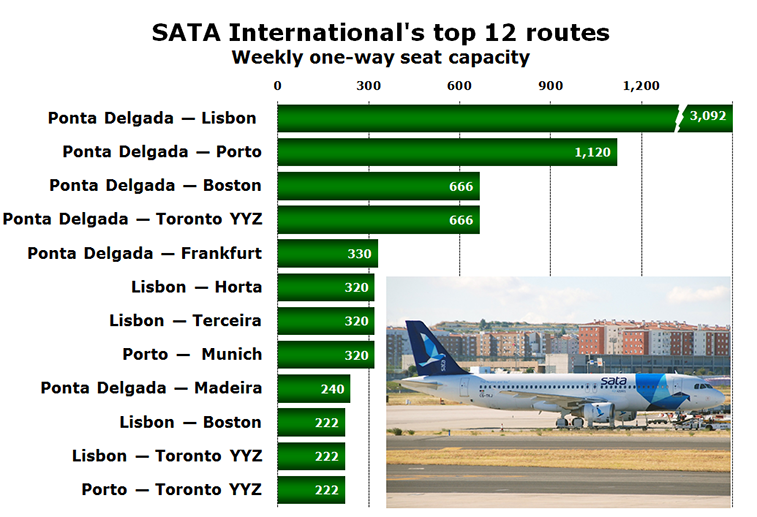 Overall, the top dozen airport pairs in SATA International’s network are relatively stable. Weekly seat capacity noted a decrease of 4.6% this October, when compared to data from the corresponding week last year, with 10 of the top 12 routes having seen their operations unchanged. Operations on the 4,525-kilometre sector from Ponta Delgada to Toronto Pearson have grown by 50% or 222 weekly seats. On the other hand, this year’s top position — the Ponta Delgada-Lisbon airport pair — is the only sector that provided capacity decrease (-9.4%), as a result of SATA International having reduced its frequency from 19 times to 17 times weekly.

Besides Pearson (served from Lisbon, Porto and Ponta Delgada), SATA International is also operating to Boston as part of its transatlantic offering, a sector flown from its hub (thrice-weekly) and Porto (weekly). Furthermore, within mainland Europe, the carrier’s network consists of seven points, Stockholm Arlanda, Frankfurt, London Gatwick, Lisbon, Porto, Munich and Paris Orly, with the latter having been added on 25 April with weekly flights from Ponta Delgada.