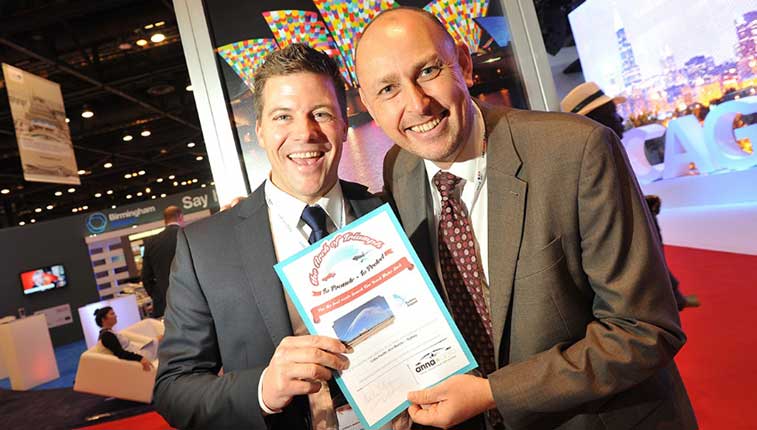 Sydney Airport’s Head of Business Development David Bell was on-hand last week at World Routes in Chicago to receive the Australian airport’s ‘Arch of Triumph’ certificate on behalf of the airport’s firefighters from anna.aero’s Editor Marc Watkins. “The lads and lasses down the station will be well-chuffed with that,” says Bell.

All seven airport entries this week are from ‘Arch of Triumph’ newcomers – sending us their first-ever FTWAs for our four judges to scrutinise. The impact of these FTWA first-timers has however been minimal, with the winning arch from Stockholm Bromma failing to trouble the leaders, coming in at #16 spot overall. These new competitors should however learn from their initial experience and look to improve on their scores next time around.

These seven arches also include two rare ‘interior’ FTWAs, where the picture has been taken from inside the aircraft. However, all these avant garde style FTWAs have achieved is befuddling the anna.aero judges when it comes to scoring them. The range in the scoring for these two FTWAs are 4.7 and 7.8, whereas typically the range is somewhere between one and two points across all four judges.

On a final note concerning the upkeep of international relations ‒ despite several route launches this week, any FTWAs from the US have failed to show-up – a bit like their golfers in Gleneagles. Keep Monitoring!! 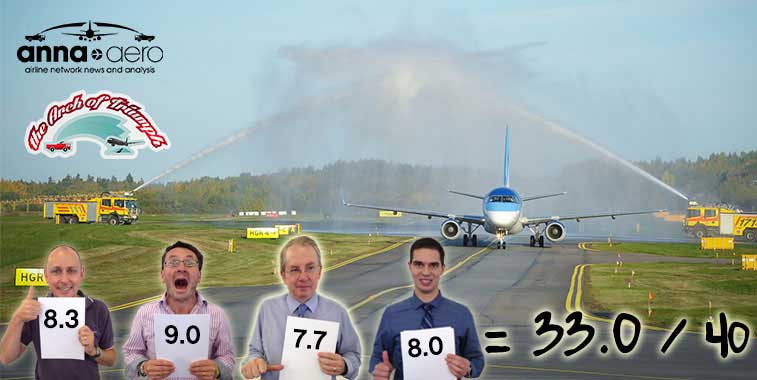 Judge’s comments:  This FTWA is one for the purists. The anna.aero judge’s preference when considering a pair of perfect ‘Leaping Dolphins’ is that the individual jets of water neatly meet over the centre of the aircraft in question’s fuselage. This arch comes agonisingly close to perfection, but its back to the drawing board (probably conveniently located in the fire station sauna) for Stockholm Bromma’s firefighters if they want to challenge the best in the world. 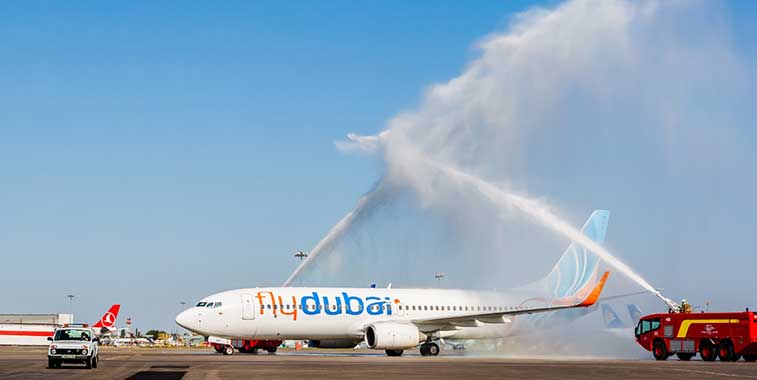 Kazakhstan’s Windy steppe takes its toll on this FTWA.

Judge’s comments:  Kazakhstan is the home to the largest dry steppe in the world, with very high winds often sweeping across the plains. Clearly this local topographical feature was not taken into account when these fire crews were setting up for this FTWA. Still not a bad effort for Almaty’s first outing in this competition. 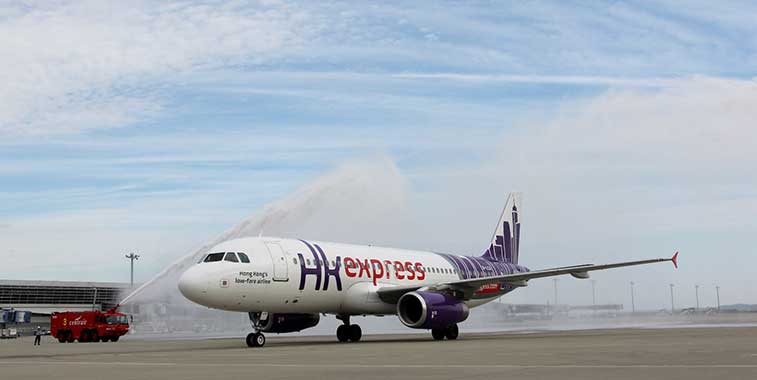 Is this a low-cost FTWA for Hong Kong’s only LCC?

Judge’s comments: We all know that LCC’s like to hammer out a keen price for their new services, but clearly the negotiators from HK Express used the metaphorical thumb-screws to get the 30% reduction in landing charges they wanted from the airport marketing team at Nagoya. However, the Japanese airport has paid them back by only providing 70% of the water needed for the launch FTWA. 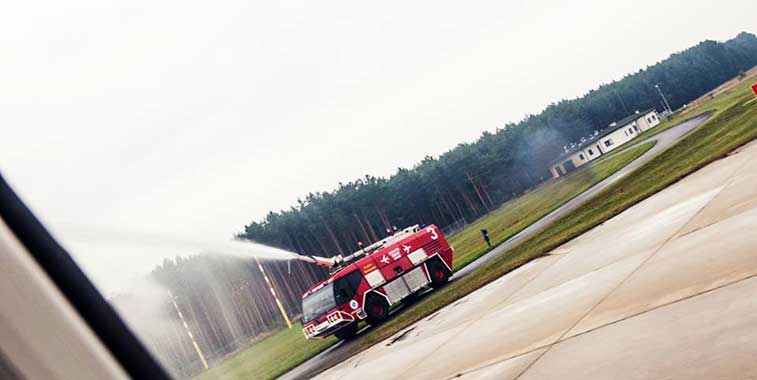 We love ‘interior’ FTWAs…but was this for a new bus service or a new flight?

Judge’s comments:  Is this photo really taken from an aircraft window or from an airport bus or ops vehicle which was used as part of Zielona Gora Airport’s ‘training’ in readiness for the start of eurolot’s weekly service from Krakow? Whichever mode of transport was used, we love ‘interior’ FTWAs. However, as we can only ever see 50% of the arch using this type of picture, the score is always restricted to 50% too. Shame. 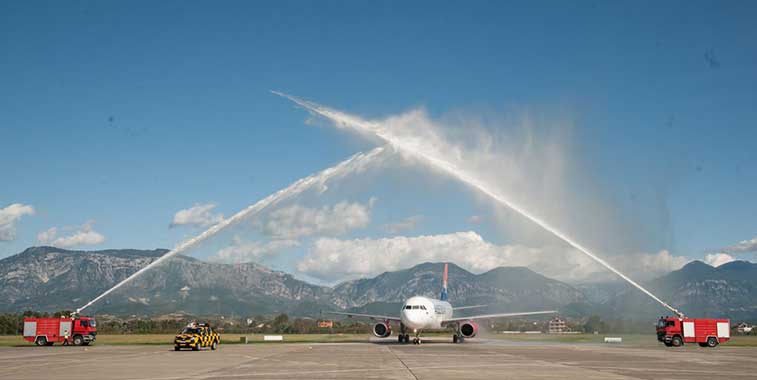 With mountains used as a backdrop, there was always going to be some ‘Tobleroning’ going on in Tirana.

Judge’s comments:  Tirana is surrounded by hills and mountains, including Mount Dajti, so it is not surprising that the airport’s firefighters have taken inspiration from those peaks when celebrating the arrival of Air Serbia’s inaugural Belgrade flight. That said, our judges prefer a smoothness to their arches rather than the more angular display on offer here. 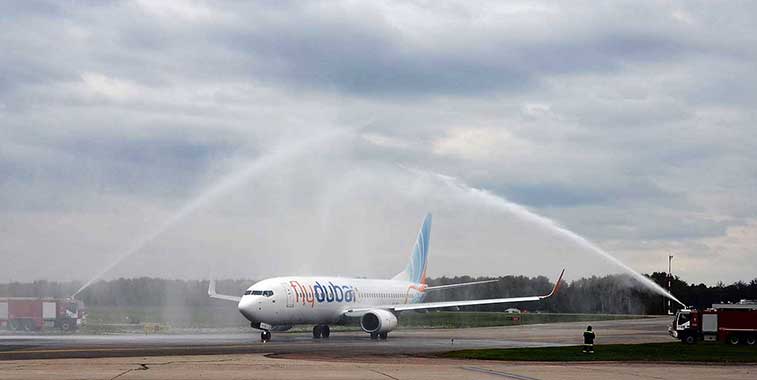 This FTWA is known locally as a ‘Moscow Mule’.

Judge’s comments:  For those of you not into your cocktails, a ‘Moscow Mule’ traditionally contains vodka (of course), ginger beer, lime and mint. While vodka in Russia has often been cheaper than water, we can confirm that the former was not used above. In fact the name of the FTWA is nothing to do with the alcohol in cocktail, but it is derived from the copper mug that the cocktail is meant to be served in, and more often than not, the beverage container of choice in most Russian airport fire stations. Honest, we don’t make this stuff up you know. 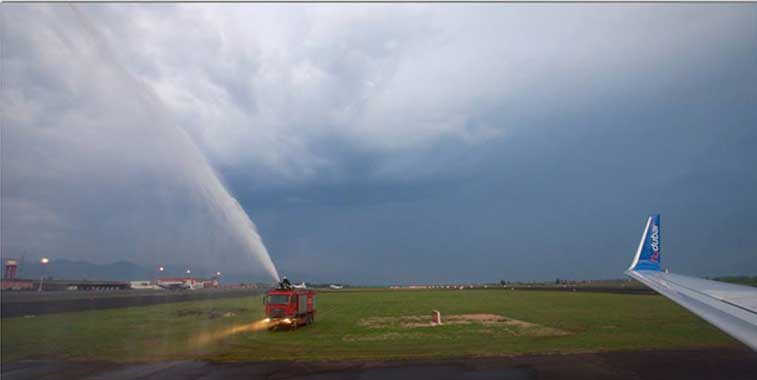 You wait ages for an ‘interior’ FTWA, then two come along in the same week.

Judge’s comments: Pictures of ‘interior‘ FTWAs divide opinions in the anna.aero office more than the introduction of goal-line technology in football and who shot J.R. (nice contemporary reference – but then three of us are the wrong side of 40, some are even the wrong side of 50). The result is a 7.8 range in the scores achieved for this effort from Entebbe.