One of the less high profile countries that joined the European Union in May 2004 was Estonia, having a population of around 1.3 million and therefore being the smallest of the Baltic States that are part of the EU (Latvia — two million; Lithuania — three million). Tallinn Airport, formerly known as Ülemiste Airport before 29 March 2009, is the main gateway to the Estonian capital, and serves as a base for Estonian Air. Due to its central position between the Baltic States, Scandinavia and Russia, the airport’s catchment area extends to no fewer than 9.4 million people. Examination of Innovata schedule data for this October indicates that the airport offers over 27 non-stop services operated to 18 countries. 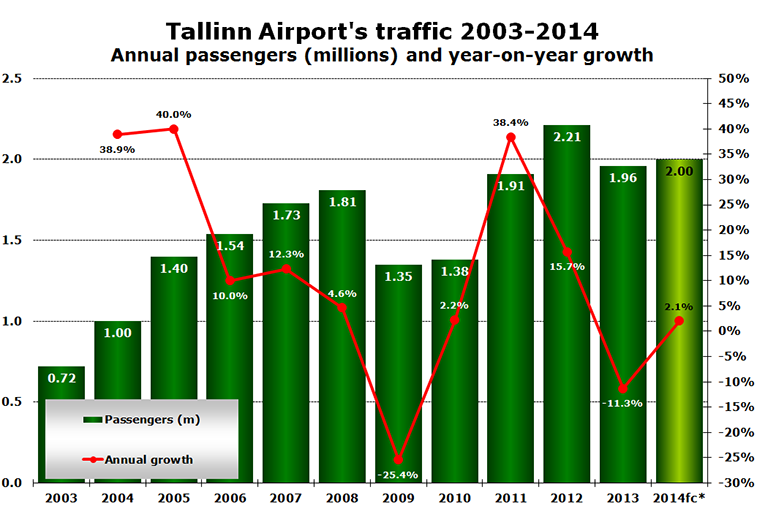 After joining the EU in May 2004, passenger traffic at Tallinn more than doubled in just three years and reached 1.8 million in 2008. The following year, in 2009, demand fell by 25% as the economic crisis affecting Europe took its toll on the country. Since the beginning of this decade, traffic at the airport started to stabilise, peaking in 2012 at 2.2 million, due to Ryanair having expanded significantly at the gateway. In the first eight months of 2014, for which traffic data is already available, the airport noted an increase of 2.1% when compared to the corresponding period of 2013, with around 1.3 million passengers achieved until end-August. If Tallinn continues on its existing 2014 growth trajectory, anna.aero predicts it will achieve around two million passengers this year.

Tallinn ranked as “good” by SVID

Monthly traffic figures indicate that demand follows a typical northern European profile, with a peak during the summer period when leisure demand is at its highest, and a dip between November and February. Entering Tallinn’s monthly passenger data for 2013 into anna.aero’s Seasonal Variation in Demand (SVID) calculator, the airport performs well, generating a score of 4.82, a “good rating”. Against its fellow airport peers from the Baltics, its 2013 score is marginally higher than the busiest airport of Latvia, Riga (4.18 — good). Moreover, when compared to Vilnius — the primary gateway to Lithuania — it performs worse than the 2.7 million facility, which scores 3.58, but still only a “good” result. Therefore, Tallinn has entered the rankings at #31 spot, between Dublin (4.80) and London Luton (4.95).

While a total of 13 carriers operate from Tallinn, the top 10 airlines command over 97% of weekly seats this October. As a result of increasing its weekly capacity by 9.8% or 844 seats, Estonian Air managed to maintain its top position in 2014. Furthermore, the flag carrier, which controls 35% of all weekly seats at the airport, operates a total of 11 non-stop routes from Tallinn, of which Stockholm Arlanda is the most frequently flown destination, being served with 23 weekly flights. Noteworthy is the fact that Estonian Air commenced 10 weekly flights to Stockholm Bromma on 29 September. Ranking second with a weekly seat share of 15%, Lufthansa connects Tallinn to Frankfurt with thrice-daily operations, using a mixed fleet of its A320s and A321s. 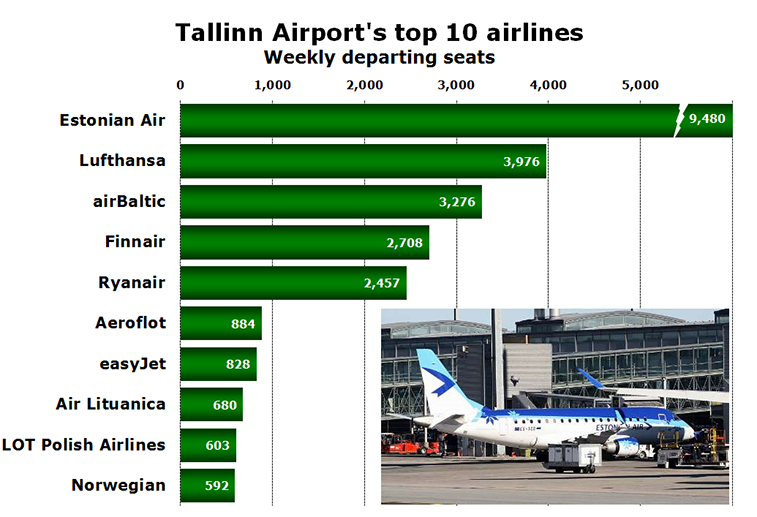 Weekly seat capacity for this October has slightly gone up 0.5% (when compared to the same week last year), with five of the top 10 operators recording capacity growth, while both Aeroflot and Norwegian saw their operations unchanged. Moreover, Air Lituanica landed for the first time at the airport on 12 March, with 10 weekly operations from Vilnius. Lufthansa is the fastest growing carrier at Tallinn, posting a net annual growth in weekly capacity of 1,586 weekly seats, coming as a result of increasing its frequency on the 1,471-kilometre sector to Frankfurt by one daily flight. By comparison, following the withdrawal of operations to Dublin, Frankfurt Hahn, Manchester, Weeze and Chania, Ryanair has trimmed a total of 2,268 seats (-48%) from its October schedule. On 4 July, TAP Portugal touched down at Tallinn Airport, with the addition of thrice-weekly flights from Lisbon, utilising a mixed fleet of its A320s and A319s. Cutting the cake are: Jari Nuotio, Key Account Manager Finland & Baltics, TAP; and Erik Sakkov, Member Management Board, Tallinn.