Air Wisconsin grows by 1.6% in 2014 H1; Philadelphia is busiest airport by departures Among the five new routes launched by Air Wisconsin over the last 12 months from its busiest airport — Philadelphia, was the 922-kilometre sector to Grand Rapids, added with twice-daily operations on 3 September. Besides this, the carrier also added services to New York Newark, Memphis, Lexington and Fort Wayne as part of its expansion at Philadelphia.

Established in 1965 to provide services between Appleton, WI and Chicago, IL, Air Wisconsin (also known as Air Wisconsin Airlines Corporation — AWAC) has grown considearbly, offering services to a total of 67 destinations in the US and Canada this October. The carrier is one of the largest privately-owned regional airlines in the US, currently operating regional jet flights as US Airways Express, under contract with US Airways from its hubs at Washington Reagan and Philadelphia. Following the merger between American Airlines and US Airways last year, Air Wisconsin is expected to eventually commence operations as American Eagle in the future, operating alongside other regional airlines including Mesa Airlines, PSA Airlines, Chautauqua Airlines, Republic Airlines and SkyWest Airlines. In addition, the airline also provides ground handling services for United Express and US Airways at 17 and three US airports respectively.

With a current fleet of 71 50-seat CRJ 200s (according to Planespotters.net), Air Wisconsin handled around 6.1 million passengers last year, representing a modest decrease of 0.7% when compared to 2012 figures. Even though its traffic declined, the airline did not have a bad year, as the load factor went up 2.5 percentage points to 76%. 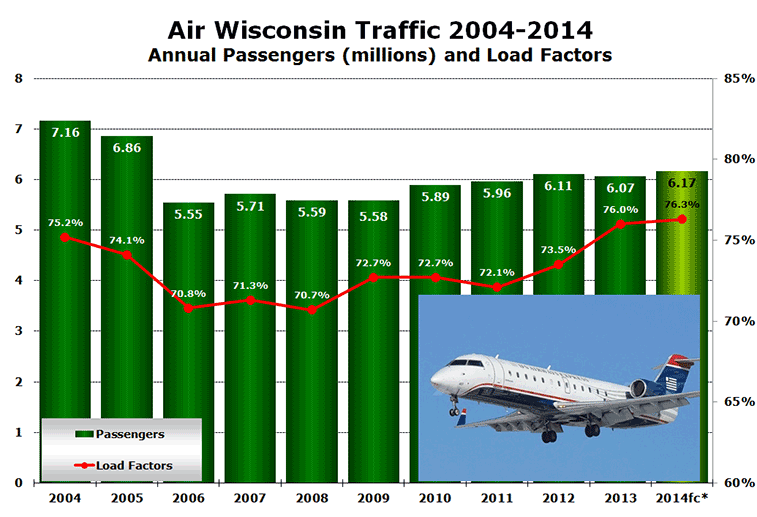 Annual traffic data published by the US Department of Transport (DoT) shows that the airline suffered briefly in the period after 9/11. The double-digit decrease of 19% in 2006 was mainly caused by the fact that United Airlines decided to end the feeder contract with Air Wisconsin in April 2005. However, between 2006 and 2013, the airline’s traffic began to stabilise, posting an average annual growth rate (CAGR) of 1.1%, while its load factors have oscillated between 70.7% and 76.0% over this timeframe. In the first six months of 2014, for which passenger data is already available, the carrier’s traffic has increased by 1.6% (when compared to the corresponding period of the previous year), with over three million passengers achieved until end-June. If Air Wisconsin continues on this growth trajectory, it would achieve around 6.2 million passengers this year, based on anna.aero’s forecast.

Philadelphia is busiest airport by departures

Examination of Innovata schedule data for this October reveals that Air Wisconsin serves a total of 67 airports, with the top 12 gateways accounting for 66% of all weekly departures. While the number of departures by the top 12 busiest airports has decreased by a net 12 flights year-on-year, their respective share has slightly dropped by 0.6%. Growing by 19%, Philadelphia is by far Air Wisconsin’s busiest airport in terms of weekly flights, being connected to 52 destinations, of which four are in Canada (Toronto Pearson, Montreal, Ottawa and Quebec). As a matter of fact, the 192-kilometre sector to Reagan is its most frequently served airport pair from Philadelphia, with 40 weekly operations. Over the last 12 months, the airline commenced five new routes from Philadelphia, namely to New York Newark, Memphis, Lexington, Grand Rapids and Fort Wayne, with the latter having been added on 1 October with twice-daily flights. 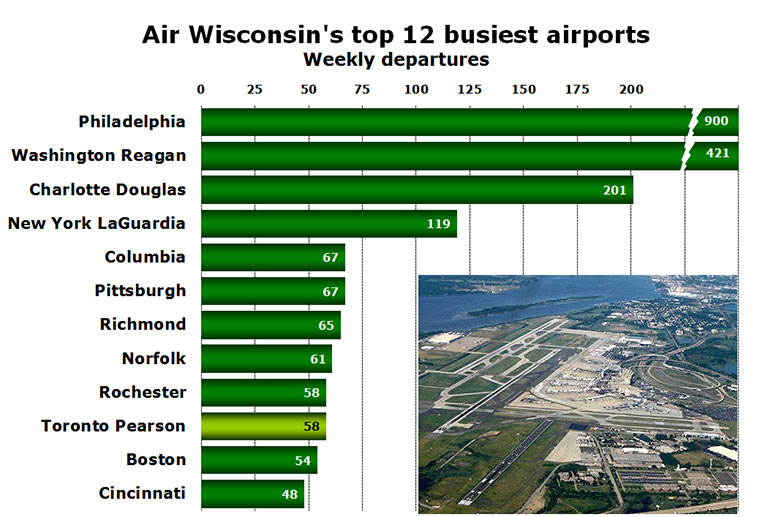 Air Wisconsin’s weekly departures increased by 0.6% this October, when compared to data from the same week last year, with eight of the top dozen airports posting growth. Therefore, the stand out performance is that emanating from operations at New York LaGuardia, having increased by 53% or 41 weekly flights in the last year. The carrier has significantly expanded at the 21st busiest gateway in the US, with the addition of new services to Dayton, Wilmington, Norfolk, Richmond and Roanoke. Overall, Pearson is the only Canadian airport (highlighted in bright green) that has entered this year’s ranking, being served from Philadelphia (33 times weekly), Reagan (18 times weekly) and Charlotte Douglas (daily).