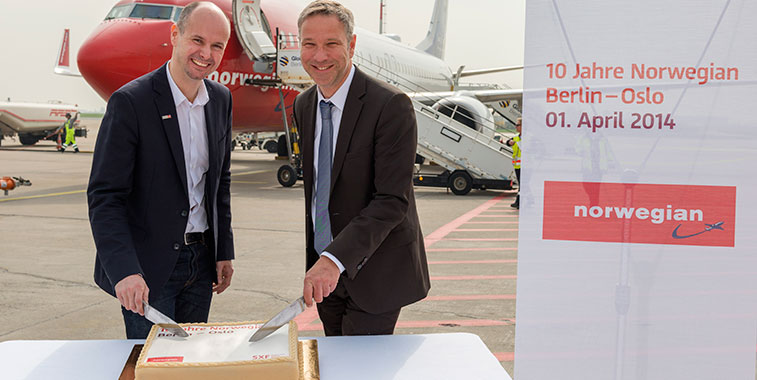 While Germany’s two biggest carriers Lufthansa (including germanwings) and airberlin are growing their passenger numbers quite modestly in 2014, Norwegian is expanding rapidly. Between August 2013 and August 2014 the airline started 17 new routes across four German airports (Berlin Schönefeld, Cologne Bonn, Hamburg and Munich), all to destinations in Spain, and has more than doubled its seat capacity.

The success of Germany’s football team in winning the FIFA World Cup for a fourth time in July, appears to help explain the sudden spurt in traffic growth at Germany’s airports in August. Passenger numbers across the nation’s airports were up 6.1%, the highest year-on-year growth figure since December 2011. While domestic traffic was basically flat (+0.4%), European traffic grew by 6.3% while non-European traffic grew by an impressive 10.7%. According to ADV, German holidaymakers have been heading in increasing numbers to Egypt and Turkey, while also continuing to visit favourite holiday regions such as Greece and Spain. This was confirmed last week by a TUI Travel press release (2 October) which revealed that there had been “Strong trading in Germany since the end of the World Cup with package holidays up by 22% (overall bookings up 9%) and margins ahead of last year”. 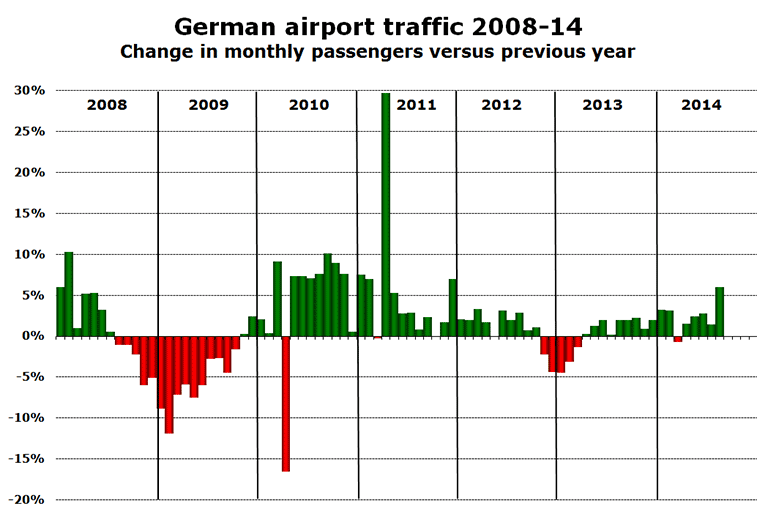 While passenger numbers across German airports in August were up 6.1%, Germany’s two leading airlines reported less dynamic growth that month. According to their own figures Lufthansa’s passenger numbers (including germanwings) were up 4.5%, while airberlin carried 2.7% more people in August. According to Innovata / Diio Mi data for August 2014, the fastest-growing airlines by seat capacity among the 25 busiest in the German market are: Norwegian (+113%), germanwings (+54%), SunExpress (+40%), Pegasus Airlines (+38%), Aegean Airlines (+38%), Vueling (+36%), Aeroflot (+31%) and Air Dolomiti (+31%).

The ‘MEB3’ carriers have also all increased seat capacity in the German market with Emirates (+27.0%) beating Etihad Airways (+23.8%) and Qatar Airways (+12.8%). Emirates and Qatar Airways have both achieved this capacity increase without a change in the number of weekly flights, simply by using larger gauge aircraft. Emirates is now the 15th busiest airline in the German market, just behind United Airlines, the busiest non-European airline serving Germany’s airports.

In the first eight months of this year, German airport traffic is up 2.6% compared with the same period in 2013, according to ADV. Seven of the country’s busiest eight airports have reported year-on-year growth, but of the remaining 12 airports in the top 20, eight have seen traffic declines. The most dramatic fall in passenger numbers has been at Weeze (-28.8%) followed by Memmingen (-10.4%), Frankfurt Hahn (-9.9%) and Karlsruhe/Baden-Baden (-7.2%). Three of these four airports are Ryanair bases, which highlights how traffic at such airports can fall as well as grow. Conversely, at Bremen, another Ryanair base, traffic is up 5%. 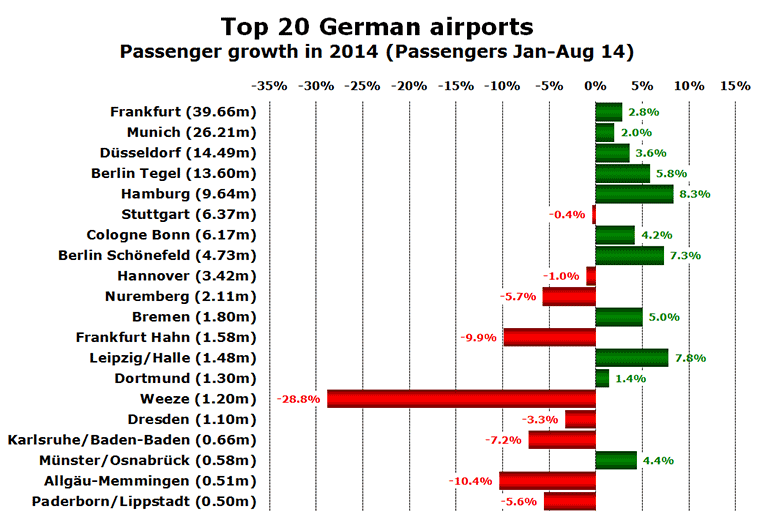