Weekly seats up 2.3% and ASKs up 4.7% between Europe and Asia; London Heathrow-Hong Kong is #1 city pair Several new routes were launched in 2014 between Europe and Asia, including the resumption of services of Garuda Indonesia from Jakarta to London Gatwick on 8 September, operated five times weekly via Amsterdam. The SkyTeam member returned to the UK after an absence of over 10 years.

Examination of Innovata schedule data for this October reveals that flights between Europe and Asia have experienced a modest increase of 0.7% in the last 12 months, with around 4,250 weekly flights being now operated between the two regions. Total weekly departing seats have grown at a faster rate, having over the last year increased by 2.3%, with ASKs up 4.7% to 5.8 billion ASKs being offered this October.

The top 12 country pairs represent over 44% of all weekly seats provided between the two regions, which has slightly decreased from the 45% recorded for the same week last year. The market pairing between the ‘European’ and the ‘Asian’ part of Russia has managed to maintain its top position in 2014, even though operations between the two regions have decreased by 2.9% or 5,469 fewer weekly seats. A total of 18 airlines are serving this market pair this October, as opposed to 22 in the corresponding month last year. Noteworthy is the fact that Aeroflot is the dominant operator serving the market pair, accounting for 34% of weekly seats, followed by S7 Airlines (18%) and Transaero Airlines (16%).

While the top position has remained unchanged, there have been movers in this year’s ranking. A new entrant into the top dozen is that of #11 country pair, France to Japan (highlighted in bright green), which posted an increase of 7.3% due to All Nippon Airways commencing daily flights from Tokyo Haneda to Paris CDG on 30 March and Air France resuming operations on the 9.703-kilometre sector from CDG to Haneda on the same day, a link that was last operated in 1978. 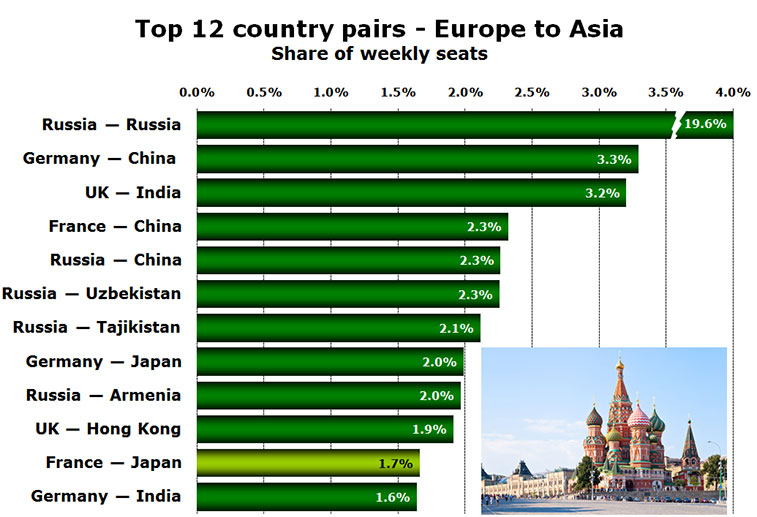 Overall, seven of the top 12 country pairs experienced growth when comparing data from October with the same week last year. The link between Russia and China is the fastest growing country pair, having increased by 35% or 5,391 weekly seats in the past 12 months. This impressive growth was due in part to China Eastern Airlines, which has launched its second route to Moscow Sheremetyevo on 29 June, with twice-weekly flights from Xi’an, and ORENAIR’s two new links from Sheremetyevo to Hangzhou and Tianjin. By comparison, services between Russia and Uzbekistan provided the greatest capacity decrease (-19%), as a result of Tatarstan Airlines, Rossiya Airlines and Moskovia Airlines withdrawing their operations from this country pair.

While the UK is featured in two of the top 12 country pairs, the European country is present in five of the top 12 route pairs. Therefore, London Heathrow is by far the most popular origin destination for services to Asia, being featured five times in the top dozen airport pairs between the two regions. The top 12 city pairs currently offer close to 14% of the total market, which represents the same share as in the corresponding week of 2013. One new entrant has entered this year’s ranking, namely the 5,811-kilometre sector from Sheremetyevo to Beijing, which posted double-digit growth of 10% due in part to Hainan Airlines replacing its twice-weekly A330-200 operations with thrice-weekly A330-300 flights. 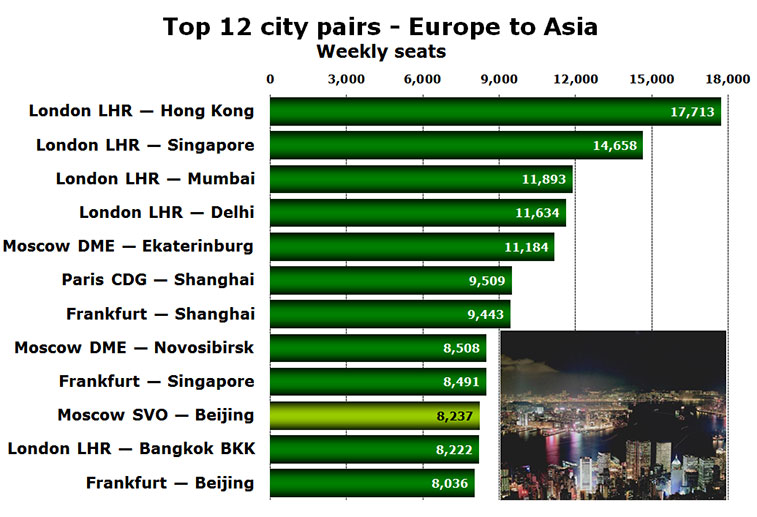 Following a yearly increase of 6%, the 9,664-kilometre sector from Heathrow to Hong Kong still accounts for the majority of weekly seats this October, being served by British Airways, Cathay Pacific Airways and Virgin Atlantic Airways with a combined 55 weekly flights. Furthermore, city pair #2, Heathrow-Singapore, managed to climb two positions, as weekly seat capacity increased by an impressive 20% this October. On the other hand, five of the top dozen city pairs experienced capacity loss in 2014, while the 7,810-kilometre route from Frankfurt to Beijing saw its operations unchanged. Services between Heathrow and Bangkok Suvarnabhumi recorded the greatest capacity decrease (-13%), owing to Thai Airways reducing its frequency from twice-daily to 13 times weekly as well as replacing seven of its weekly 747-400 operations with A340-600 services.

Four new routes still to be launched in 2014

Despite these declines, the capacity between Europe and Asia is set to grow further in 2014. This is exemplified by an array of new services that are scheduled to be commenced by the end of the year, including the launch of four weekly flights by Cathay Pacific on the 9,651-kilometre sector from Hong Kong to Manchester.