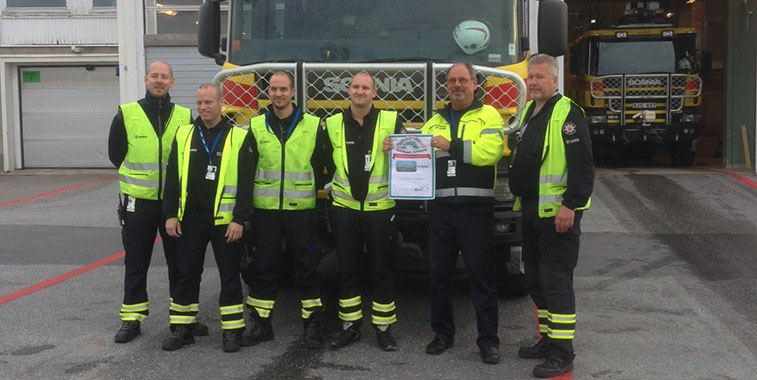 We have now had over 200 FTWA entries in 2014, yet Porto Airport joins an elite band of nine airports this week (Boston, Brussels, Paris CDG, Dresden, Edinburgh, Miami, Montpellier, Tokyo Narita and Porto) in entering this year’s ‘Arch of Triumph’ competition three times or more. However, of those multiple entry airports, only two – Dresden (one win in four entries) and Tokyo Narita (two wins in three entries) – have actually secured the prestigious certificate to adorn the fire station walls. Until this week that is. Brussels has entered the competition seven times this year – more than any other airport ‒ and has finally secured its first win. So when it comes to FTWAs, clearly practice does make perfect. Also interesting (well we think so) is that all nine of these multiple entry airports have airport codes starting between A and O. Keep monitoring!! 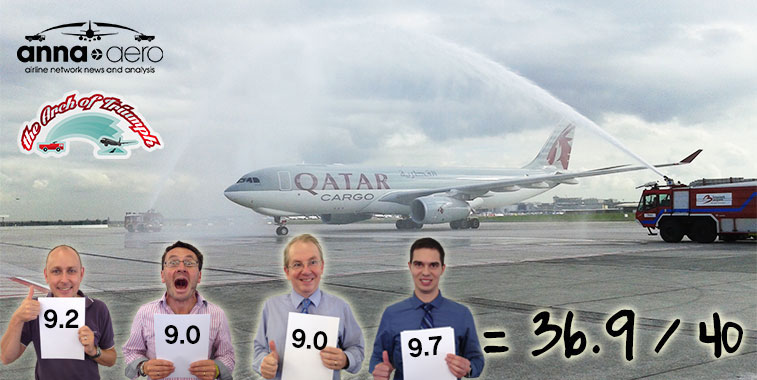 Judge’s comments: The only other cargo FTWA we have had sent in to be scored by the anna.aero judges was the arch sent in announcing the arrival of Qatar Airways Cargo at Dubai Al Maktoum. Such was its quality that from 1 February to 24 April this FTWA sat at the top of the 2014 ‘Arch of Triumph leader board (it’s now sitting in bronze position). The second ever cargo FTWA again involves the Doha-based oneworld member, this time for its launch of services to Brussels. And again we have another top quality winning FTWA helping the Belgian capital to its first ever win – at the seventh attempt. 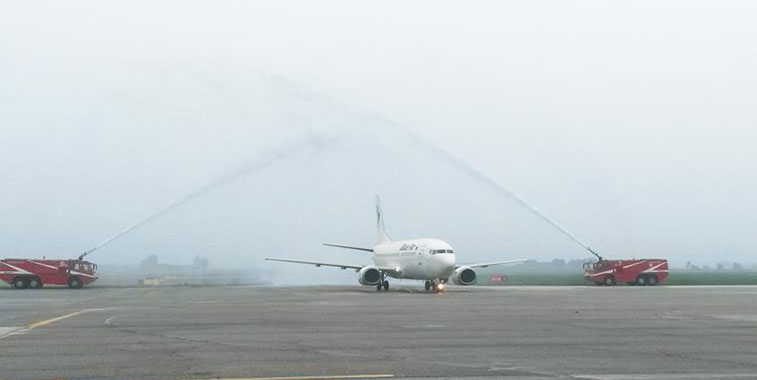 We love the snazzy flashes down the side of the Cuneo fire tenders.

Judge’s comments:  This is the first FTWA in ‘Arch of Triumph’ history from the Italian regional airport of Cuneo. And as first-time efforts go, this isn’t too bad, with a slight bit of ‘Tobleroning’ mixed with a hint of ‘Gangnam Style’. That said, these errors are far from heinous and are easily rectified. We’re sure that Cuneo’s BDM Anna Milanese will be able to give the airport’s firefighters some clear guidance on this one. 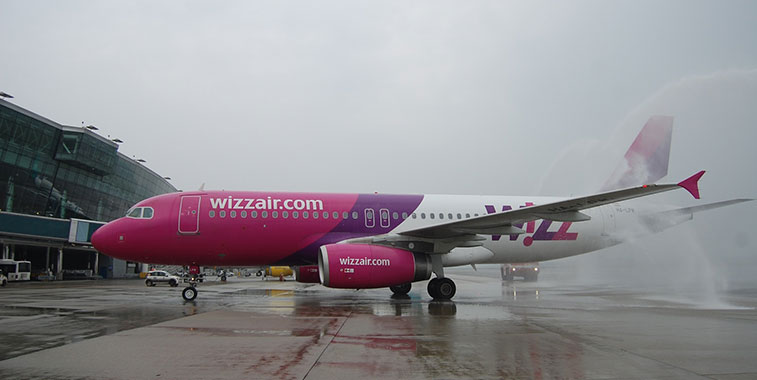 Continual improvement and refinement of your airport’s FTWA is a must if you are to progress in this competition.

Judge’s comments:  Last October, Turin Airport sent us its first FTWA, to celebrate the start of services from Amsterdam by transavia. While the four times weekly operation to the Netherlands continues to operate, the arrival of Wizz Air, with this its first service from Bucharest and marked by the airport’s second-ever FTWA entry, is perhaps more momentous. Not because it marks the start of hopefully a beautiful and commercially excellent relationship which will provide benefits to both airline and airport, but for the fact that the airport’s firefighters have improved on their FTWA score – achieving a tally of 20.8 versus the 19.2 scored last year. Yay! 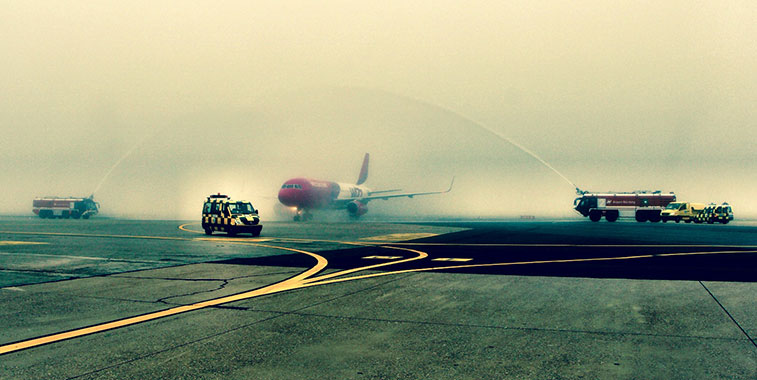 Arranging for a foggy backdrop to your FTWA can add extra drama to your pictures.

Judge’s comments:  No matter what the meteorological conditions are on the day, quality FTWAs will always shine through. Which is exactly what has happened here at Nuremberg. In fact the fog which is lurking behind the arriving Wizz Air aircraft and a near perfect pair of ‘Leaping Dolphins’ adds nothing but drama and atmosphere to what otherwise could have been a rather grey image. 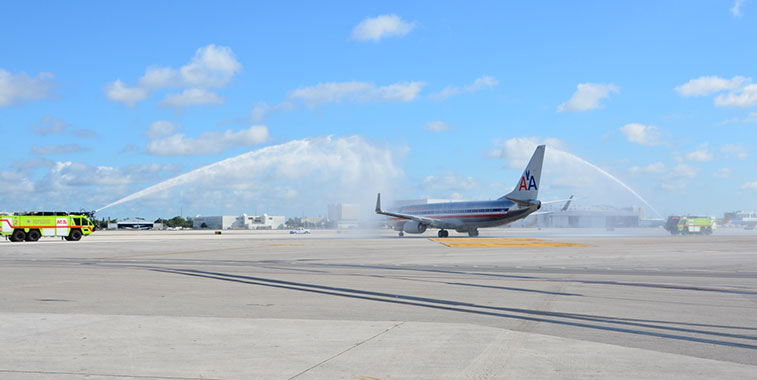 Shooting your load of water too late is far worse than shooting too early.

Judge’s comments: Like comedy and hitting the perfect drive through the covers for four (a good shot from the game of cricket), it is all about timing. FTWAs are not that much different either. Firing up the water cannons on your tender has to be done just at the right time, or else you end up with a gap in your arch more capacious than an elephant’s scrotum. Maybe next time Miami. 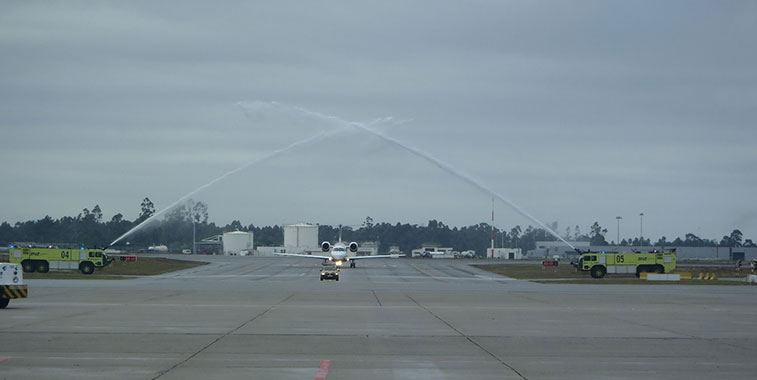 Will it be third time lucky for Porto airport this week?

Judge’s comments: The more you practice something, the better you get right? However, the opposite seems to be true at Porto. Having scored 34.0 and a creditable second place in the week in question when flybe’s Birmingham-Porto service started in April and then 32.1 for Europe Airport’s launch of services from Brest in July, this week Portugal’s second busiest airport only managed a lowly 29.8. This downward spiral in its scores will not see Porto secure its first ever ‘Arch of Triumph’ in the near future. 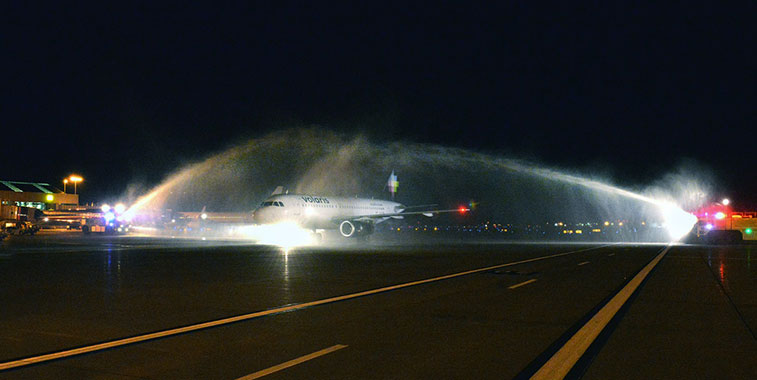 Pancakes in Portland – normally yummy but not when it comes to FTWAs!!

Judge’s comments: Portland is widely recognised as one of the greenest cities in the US and clearly this environmental consciousness has affected this FTWA. The resulting flat arch, while economical in terms of the water used, has fallen foul to what is known in the trade as ‘Pancaking’ – where the angle of the arch has failed to breach 20 degrees. I love to eat them (classic style – lemon juice and sugar), but I don’t want to see them in my route launch celebrations.