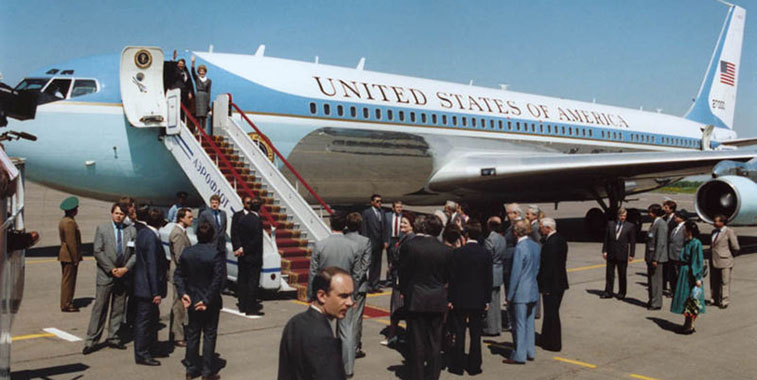 Moscow Vnukovo May 1988. US President Ronald Reagan arrives to meet with the leader of the then Soviet Union Mikhail Gorbachev. The two world leaders held a famous summit meeting which finalised the Intermediate-Range Nuclear Forces Treaty, which marked the start of the end of the Cold War. They also discussed the pending withdrawal of Soviet troops from Afghanistan. We’re unsure if airline route development made it onto their busy agenda.

Moscow’s oldest serving airport ‒ it was opened in 1941 ‒ Vnukovo (VKO) is also the closest to downtown Moscow, beating Moscow Sheremetyevo (SVO) by just one kilometre (17 versus 18), while Moscow Domodedovo (DME) is 26 kilometres south of the city. While Vnukovo is the smallest of the three main Moscow airports, handling 11.1 million passengers in 2013 versus 30.8 million at Domodedovo and 29.3m at Sheremetyevo, it was the fastest growing, posting a 15% annual increase compared to 9.2% at DME and 11.7% at SVO. In fact, Vnukovo has nearly doubled in size since 2007, when the airport handled just 6.8 million annual passengers. Traffic growth for 2014 is currently outstripping that which was achieved in 2013, with average monthly increases of 20% being recorded between January and August, rising from 7.28 million passengers in 2013 to 8.71 million this year. If this level of growth is maintained then the airport could break 13 million annual passengers in 2014.

Vnukovo valued as ‘good’ by SVID

Entering Vnukovo’s monthly passenger data for 2013 into anna.aero’s Seasonal Variation in Demand (SVID) calculator, the airport performs well, generating a score of 5.97 ‒ a ‘good’ rating. With nearly 60 seasonality performance evaluations completed so far in 2014, the airport will be perhaps be a little disappointed with its global ranking of 40th, in the bottom third, nestling in between Edinburgh (5.81) and Samara (6.32), however it has improved significantly on its 2012 performance of 7.32, which is a positive sign for Moscow’s third airport.

Evaluating Vnukovo alongside its bigger Russian capital city peers, we also ran SVID calculations on significantly busier Domodedovo, the world’s 50th busiest airport (5.55 – ‘good’) and the similarly-sized Sheremetyevo, which generated another ‘good’ result (3.91). Like most Northern European airports, all three Moscow airports peak in August, and also have their seasonal lows in February, with winter traffic flows representing just 46% (VKO), 52% (DME) and 57% (SVO) of the summer peak.

Perhaps unsurprisingly, domestic capacity from Vnukovo to the rest of Russia is the largest country market at the airport. The biggest reduction in weekly flights in the last year has been to Ukraine, which has seen its capacity tumble from 95 weekly flights in October 2013 to just 25 this year ‒ obviously for the well-documented political reasons. The largest annual increase was witnessed on routes to Latvia which has grown by a massive 157% over the past year, seeing it jump from #18 market to #7. 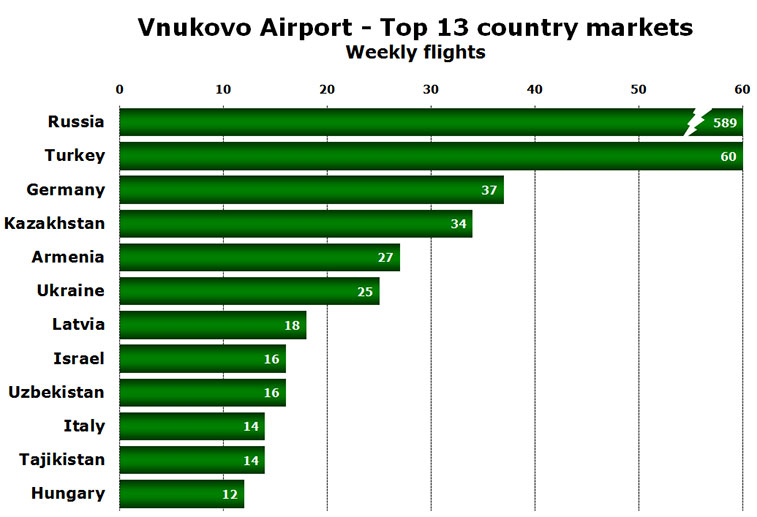 Country markets which have been added to the Vnukovo network portfolio since last October include Cyprus (11 weekly flights), China (five), Dominican Republic (two), Bulgaria (two), Maldives (two) and Cuba (one). However the net gain of countries served is only four, as Thailand (six) and Estonia (five) have been lost over the same period. This comes as a result of Transaero Airlines moving its Phuket (previously four times weekly) and Bangkok (previously twice-weekly) services to Domodedovo, whereas UTair has cancelled its five times weekly operation to Tallinn.

The top 10 airlines command the lion’s share of weekly seats, leaving just 6% for the remaining 12 serving carriers. Although some of the names have changed since last October, the top 10 airlines’ proportion of Vnukovo’s flying has remained consistent, at 94.3% in both periods. The #1 carrier UTair has contracted by 18% over the last 12 months, with capacity seemingly being shifted to its subsidiary UTair Express which has increased its weekly seats by over 200% in the same timeframe. 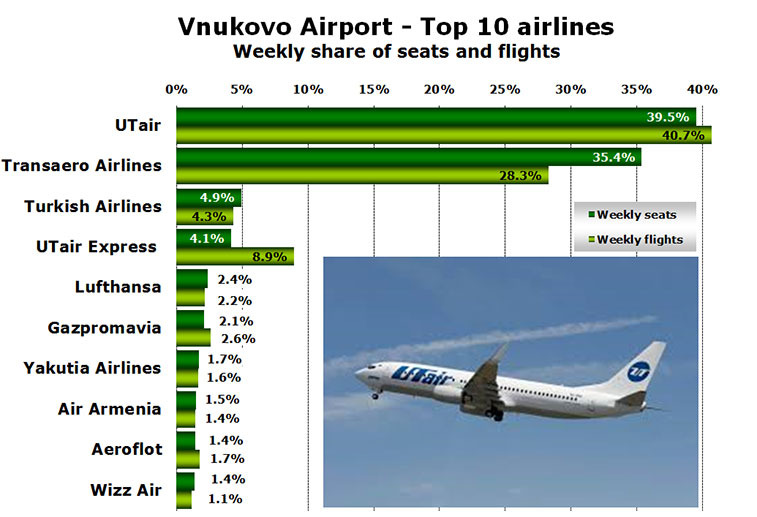 The list of serving carriers at Vnukovo has been bolstered by the arrival of three airlines since last October, with the likes of Blue Bird Airways being joined most recently by flydubai (which launched daily services from Dubai launched on 23 September) and Wizz Air Ukraine (thrice-weekly from Kiev Zhulyany on 30 September). Over the same period, the airport has seen the withdrawal of operations by Red Wings Airlines.

Clearly there was a lot of pre-event traffic in the run-up to the Sochi Winter Olympics (which were held in February 2014), as October 2013’s biggest route from Vnukovo was to the city on the Black Sea coast. Since then the route has fallen back to its present position of #3 route at the airport, experiencing a near 40% cut in weekly seats. Leaping ahead of Sochi are St Petersburg and Istanbul (IST), which have both posted double-digit annual growth of 14% and 21% respectively. 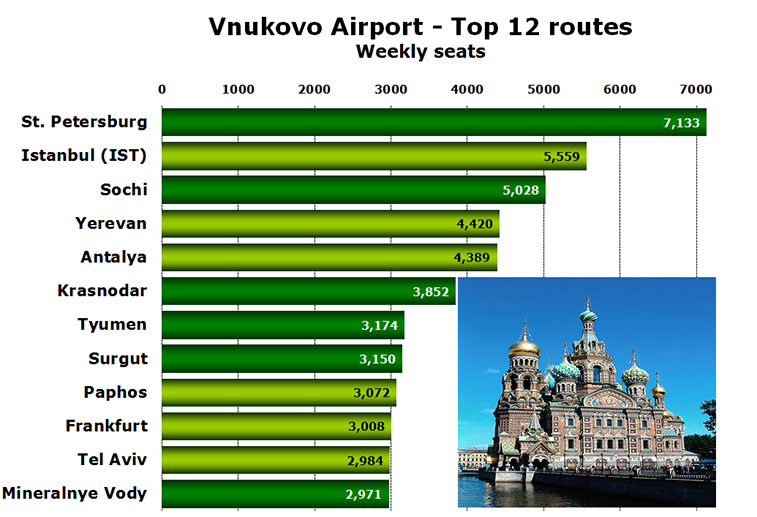 However, the most dramatic ascendancy has been experienced by services to Antalya, which have rocketed from lowly 33rd to fifth place – nearly 250% more seats than a year ago. While no other city pairing compares to the reductions felt on Vnukovo to Sochi, the 20% fall on seats to Krasnodar comes closest, with the drops encountered on Frankfurt and Tel Aviv, the only other routes amongst the top 12 witnessing annual capacity falls, being at best described as negligible (both below 1%).