Aegean Airlines and Ryanair lead surge in Greek capacity; passenger demand up over 15% this summer Aegean Airlines loves Germany. During the course of the summer, the leading Greek airline (and Star Alliance member) launched routes between Athens and Hamburg, Heraklion and Munich, and Thessaloniki and Cologne Bonn. Thanks to Aegean’s merger with Olympic Air, it has reported capacity growth of 55% in August. Greece’s airports have seen passenger traffic growth of well over 15% this summer.

After several challenging years, the Greek aviation market appears to have had an outstanding summer in 2014. Since the start of the summer season (which was helped by Easter returning to its more holiday-friendly April timing) passenger numbers at Greek airports have shown strong growth compared with last summer. With some uncertainty in other popular summer holiday destination such as Egypt, Greece has benefited.

Unlike last year, Athens Airport has outperformed the national average this summer with passenger growth of between 20% and 25% in each of the last four months. Since April, domestic growth has actually slightly outstripped international growth, helped by the launch of Ryanair’s five times daily flights to Thessaloniki and twice-daily flights to Rhodes. 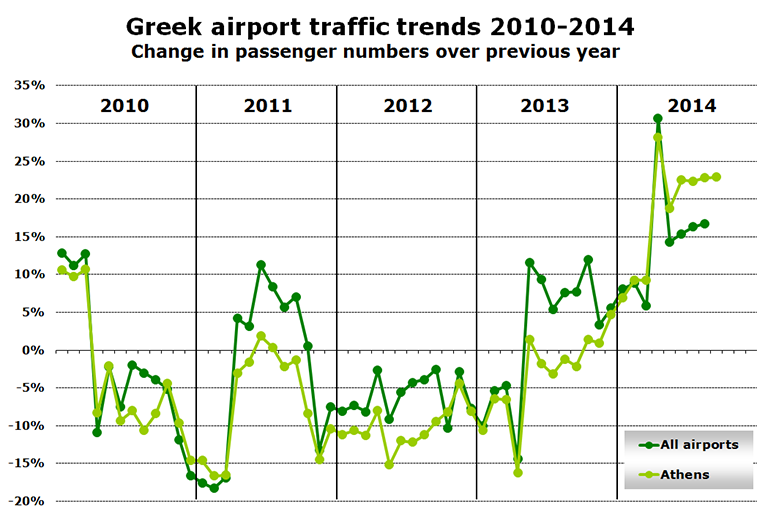 Seasonality is a major issue at Greek airports due to the dominance of the inbound tourism market during the summer, especially in July and August. In 2013, Greek airports handled 12.9 million passengers in those two months, representing 33.3% of traffic for the whole year. 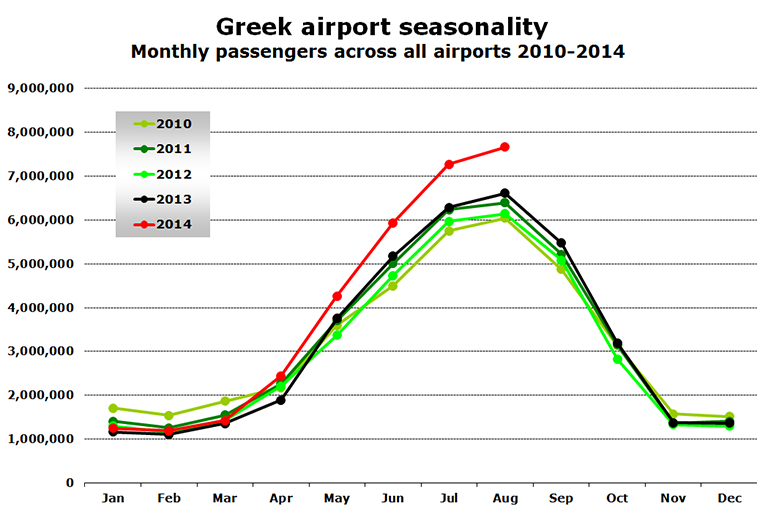 The August figures for 2014 show impressive year-on-year growth at many Greek airports. Those performing particularly well are Kalamata (+67.2%), Mykonos (+32.8%) and Santorini (+25.8%). Kalamata seems to have been targeted in particular by the German market this summer with four new services operated by Condor, Aegean adding a link to Düsseldorf, and easyJet beginning flights from its new Hamburg base. 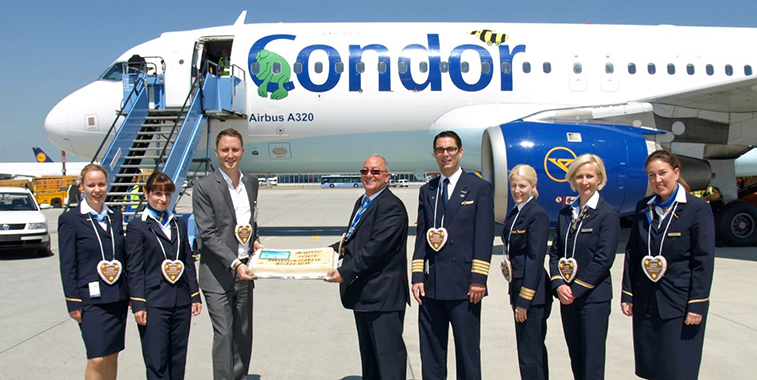 On 20 May, Condor began seasonal, weekly flights from Munich to Kalamata. It also added weekly flights from Düsseldorf, Frankfurt and Stuttgart to help Kalamata become Greece’s fastest-growing airport this summer, with passenger numbers up almost 60% compared with last summer. The Germany-Greece market has grown by around 20% this summer, based on August capacity data. Ryanair, easyJet and Vueling are fastest-growing foreign airlines.

Aegean Airlines’ merger with Olympic Air explains a significant part of that airline’s growth in the last 12 months, but the carrier has also added many new routes, not previously served either by itself or Olympic Air. Ryanair is now the second busiest airline in Greece during the peak summer period. Despite growing modestly overall this summer, Ryanair has virtually doubled its capacity in the Greek market, helped by the opening at the beginning of the summer season of new bases in Athens and Thessaloniki.

easyJet has also grown significantly, increasing Greek capacity by 25% and launching nine new routes. These were spread across several bases; Basel, Edinburgh, Glasgow, Hamburg (two), Naples (two) and Rome (two). The fastest-growing among the top 12 airlines is Vueling, which has almost trebled its capacity in the market thanks to increasing its network from eight to 19 routes. Eight of the 11 new routes were from its base at Rome Fiumicino, two from Florence, and just one from its home base of Barcelona. 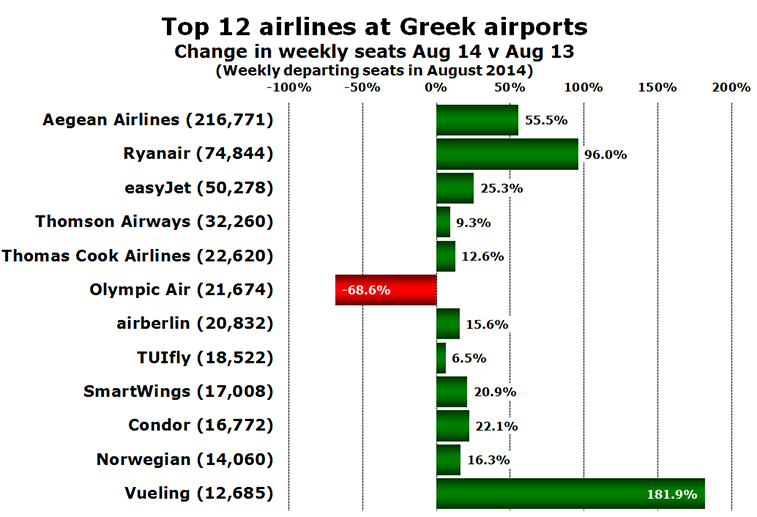 Vueling’s rapid expansion from Rome has helped generate capacity growth in the Italian market of 42% this August. The only two larger international markets are the UK and Germany, which have witnessed capacity growth of 13% and 18% respectively this summer. Among other major country markets, the UAE is up 78%, Belgium is up 61%, Switzerland 43% and France 41%.