Having a population of around 1.3 million, the city of Dallas is served by two airports, Dallas/Fort Worth and Dallas Love Field, which handled a combined total of 69 million passengers in 2013. Love Field, classified as the seventh busiest airport serving the state of Texas (behind Austin-Bergstrom – 10 million, but above San Antonio – 8.3 million), contributed close to 8.5 million of those passengers. The airport was Dallas’ main gateway until 1974 when Dallas/Fort Worth opened, and currently serves as a major base for Southwest Airlines and, as of this week, a focus city for Virgin America.

Under the operational control of Dallas Department of Aviation, Love Field offers 27 non-stop services flown to 16 US states, according to Innovata schedule data for this October. Noteworthy is the fact that on 13 October 2014, the 1979 federal amendment expired. Also known as the Wright Amendment, the federal law was designed to limit most non-stop services from Love Field to destinations within Texas and neighbouring states, in order to protect Dallas/Fort Worth. Therefore, Southwest and Virgin America were the first airlines to take advantage of the lifting of restrictions, with the LCC having launched seven routes to Baltimore/Washington, Chicago Midway, Denver, Las Vegas, Los Angeles, Orlando and Washington Reagan, and Virgin America linking it to its bases in Los Angeles and San Francisco as well as serving the US capital. 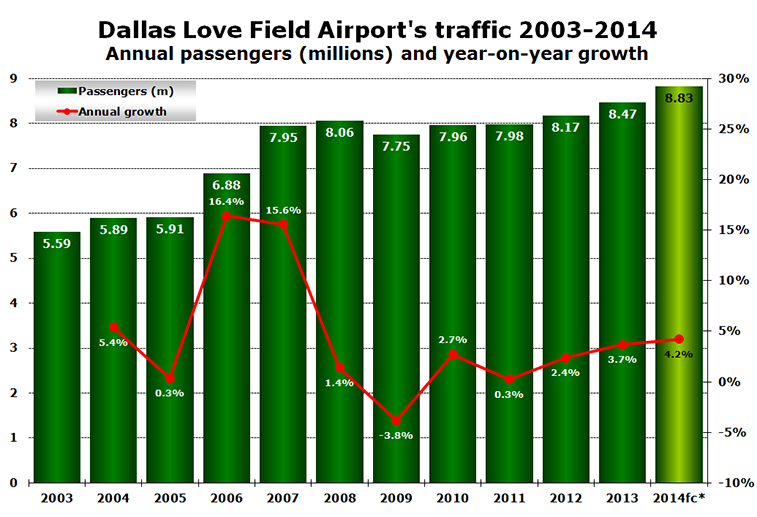 Analysis of data facilitated by the airport authority reveals that passenger traffic at Love Field has grown visibly between 2003 and 2013, with an average annual growth rate (CAGR) of 3.9% over this period. The seventh busiest airport from Texas handled around 8.5 million passengers in 2013 (a new record high), a number that increased from the 5.6 million noted 11 years ago. As a matter of fact, Love Field posted growth every year since 2003, with the exception of 2009, when it recorded a decline of 3.8% due to the global economic recession affecting the US air transport industry. In the first seven months of 2014, for which traffic data is already available, the airport posted an increase of 4.2% when compared to the corresponding period of 2013, with 5.1 million passengers handled by the end of July. If Love Field continues on its existing 2014 growth trajectory, anna.aero forecasts that the airport will handle close to nine million passengers this year.

Moreover, entering Love Field’s monthly passenger data for 2013 into anna.aero’s Seasonal Variation in Demand (SVID) calculator, the airport performs exceptionally well, producing a score of 0.63, an “excellent rating”. To give Love Field a fair evaluation, we also ran calculations on Dallas/Fort Worth (0.67, excellent) and Austin-Bergstrom (8.22, excellent). Therefore, against its airport peers from Texas, the state’s seventh busiest facility performs better that the significantly larger Dallas/Fort Worth (60 million annual passengers) and Austin-Bergstrom (10 million). With over 60 seasonality performance evaluations completed so far this year, Love Field has entered the rankings at #4 spot overall, lodging itself between Santa Ana/John Wayne (0.60) and Rio de Janeiro Galeao (0.64).

Southwest controls 91% and 86% of seats and flights

As of October 2014, a total of five airlines are serving Love Field, with Southwest, which has its corporate headquarters at the airport, being the clear leader. Classified as the world’s largest LCC based on passengers handled in 2013, the airline commands 91% and 86% of all weekly seats and flights respectively and serves a total of 23 non-stop sectors from Love Field, of which Houston Hobby is the most frequently flown destination, being served with 149 weekly flights. Ranking second, with a weekly seat share of 5.2%, Virgin America connects Love Field to Los Angeles, San Francisco and Washington as of 13 October, following the lifting of the Wright Amendment restrictions. A new operator at the airport, Virgin America received two gates from American Airlines, as part of American’s settlement with the US Department of Justice to allow its merger with US Airways to proceed. 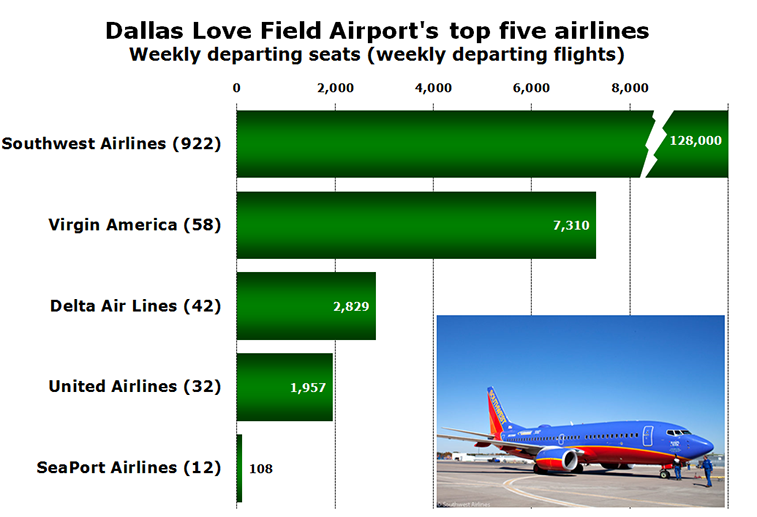 Weakly seat capacity has gone up 20% (when comparing data from this October with the same week last year), with Southwest and Delta Air Lines recording growth, while Virgin America touched down for the first time at the airport on 13 October. Hence, the SkyTeam member is the fastest growing carrier at Love Field, posting a net annual growth in weekly capacity of 1,220 seats (+77%), coming as a result of replacing 12 CRJ 200 operations with 717 flights. In addition, Delta, which was initially operating through a gate lease from American, has managed to secure an agreement with Southwest to utilise one of the LCC’s gates until 6 January, when the airline is likely to terminate its operations at the airport. Commenting on the agreement, Mark Shaw, VP and General Counsel, Southwest, said: “We have let Delta know that we are willing to potentially accommodate them on a portion of a gate through January 6, 2015, in order to avoid inconveniencing passengers booked on Delta flights from Love Field during that time. Our discussions with Delta are on-going. Any accommodation is subject to agreement between Southwest and Delta covering reasonable terms and conditions. We hope and expect to conclude these discussions quickly.” By comparison, following the reduction in frequency on the 349-kilometre sector to Houston Intercontinental, United Airlines has trimmed a total of 93 seats (-4.5%) from its October schedule.

Furthermore, starting on 2 November, Southwest will commence services to Atlanta, Fort Lauderdale, Tampa, Santa Ana/John Wayne, San Diego, Nashville, New York LaGuardia and Phoenix; while on 6 January (when Delta will terminate its operations), the LCC will add flights to San Francisco and Oakland. Besides this, Virgin America will begin serving LaGuardia from Love Field starting on 28 October.

Hobby continues to be top airport

Even though seat capacity to Houston’s oldest commercial airport has been reduced by 5%, Hobby is still the top airport operated to from Love Field in 2014, having a market share of 14%. At 385 kilometres away, Hobby is served by Southwest with 149 weekly departures. This is followed by operations to San Antonio, which has posted a 0.3% decline in weekly capacity, due to Southwest having decreased its frequency from 85 times weekly to 82 times weekly. On the other hand, two of the top dozen destinations saw capacity growth this month, namely St. Louis and El Paso, with the former having experienced the greatest increase (+10%). 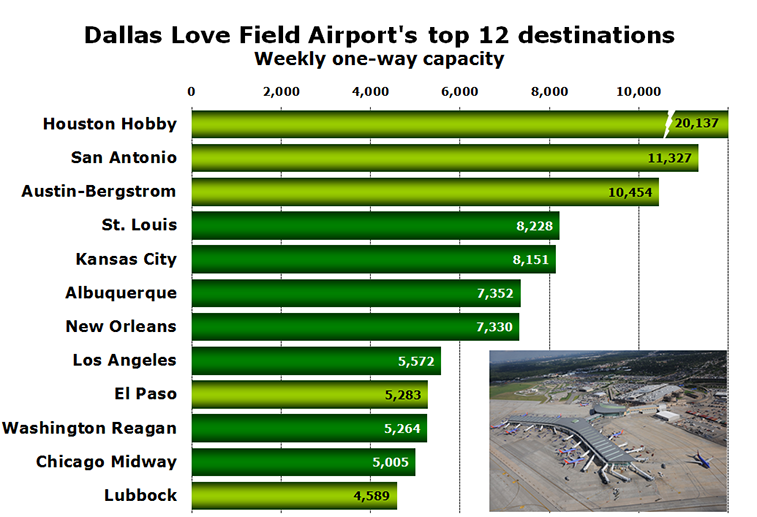 Overall, the top 12 destinations represent 70% of the total market, which is slightly down from the 83% recorded for the same week 12 months ago. Noteworthy is the fact that five Texan destinations break into this year’s top dozen (highlighted in bright green), namely Hobby, San Antonio, Austin-Bergstrom, El Paso and Lubbock, all being served by Southwest. While Love Field has seen the addition of eight new destinations this week, it has also witnessed the withdrawal of Southwest’s twice-daily flights to both Harlingen and Branson in the past 12 months. Besides Southwest Airlines’ new additions, Dallas Love Field witnessed the arrival of Virgin America from Los Angeles, San Francisco and Washington Reagan. The airline touched down for the first time at the Texan gateway with a “Downtown Express” flight hosted by Sir Richard Branson, Founder, Virgin Group, with an acoustic in-flight performance by Kacey Musgraves.