Earlier this year, easyJet celebrated 10 years of operations from Berlin Schönefeld. During that time the airline has, at one time or another, operated non-stop services to 56 destinations, of which 43 were still active this summer. As a result, easyJet has the second biggest route network from Berlin, beaten only by local carrier airberlin.

easyJet’s first services to the German capital began in the summer of 2004 with flights from London Luton on 28 April. The airline’s first German base celebrated its 10th anniversary earlier this year, and this summer ranked as the carrier’s sixth busiest base with 279 weekly departures (beaten by London Gatwick, Milan Malpensa, Geneva, London Luton and Paris CDG). As a result of Lufthansa’s transfer of services to its lower-cost subsidiary germanwings, easyJet is now the second biggest carrier across Berlin’s two airports (Schönefeld and Tegel), beaten only by hometown airline airberlin.

easyJet’s network has grown steadily rather than spectacularly in recent years, with a mix of year-round and seasonal destinations. This summer saw the airline operate more weekly flights and offer services to more destinations than in any previous season. 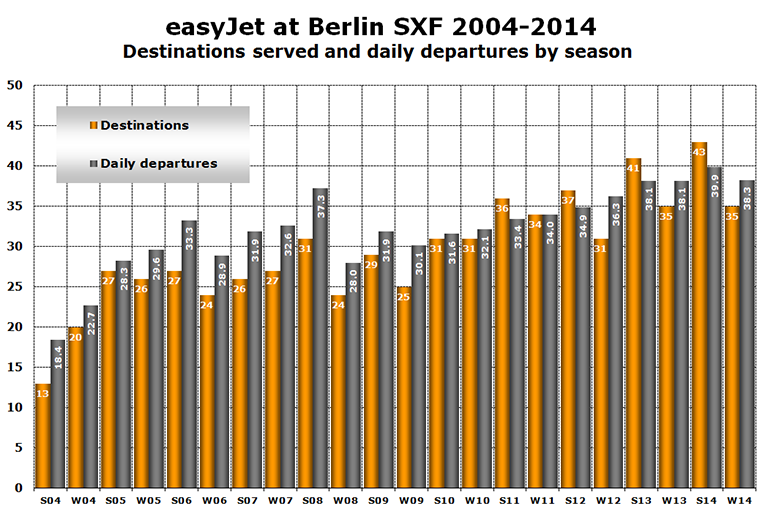 Source: Innovata / Diio Mi for February and August of each year.

During the last decade a total of 56 destinations have been served at some time or another, with 43 of those operating this summer. The following table summarises easyJet’s route development at Berlin Schönefeld on a year-by-year basis. Since 2006, between two and four new destinations have been added each year, with Tel Aviv (4 February 2014) and Faro (21 June 2014) being the most recent additions.

The UK remains easyJet’s biggest country market from Berlin, though the number of monthly flights is down 6% this October compared with the same period last year. Greece (+21%), Spain (+12%) and Netherlands (+11%) have shown the biggest percentage increases, while Austria and Israel are new country markets this year thanks to the launch of Salzburg services (on 12 December 2013) and Tel Aviv. 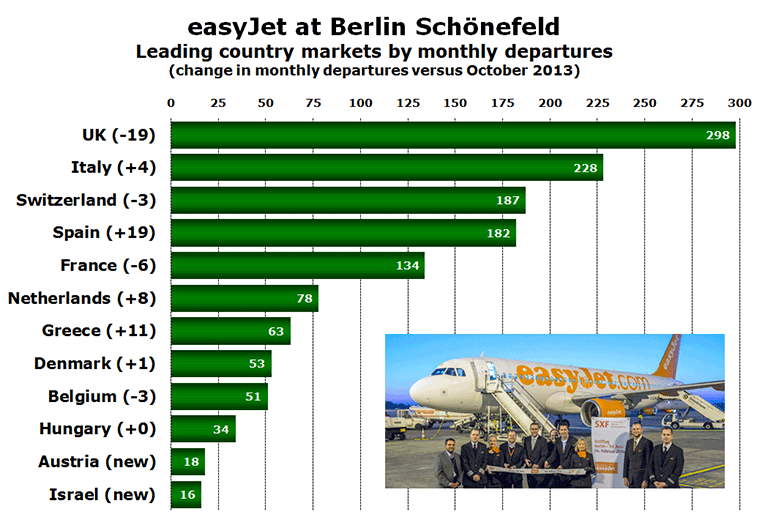