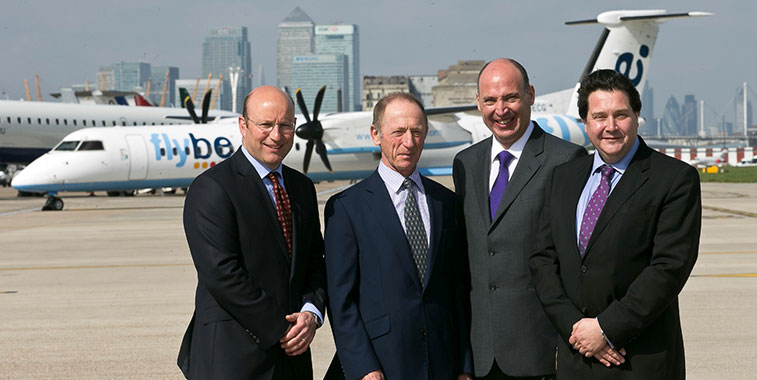 Flybe started its big return to the London market last week, with the launch of services from London City to Edinburgh (20 times weekly, Dash 8 Q400 service) on 6 October. Earlier this year, Flybe all but abandoned the capital city of its home UK market, reducing its network of domestic services at London Gatwick from seven destinations offering up to 21 daily flights to one thrice-daily operation (see below), disposing of the majority of its slots to the airport’s dominant carrier easyJet. Most of these services terminated on 29 March 2014. At that time its London Gatwick services were as follows:

The last of these routes, to Newquay, is the only service which still operates into London’s second airport today. On 30 March, Flybe started services on Dundee to London Stansted, operated by its Loganair franchise operation, and replacing the Air France-branded flights which had flown into London City until the day before, using the same Loganair metal. Both routes are Public Service Obligation-involved services which means that any financial assistance most likely relates directly to those specific airport pairs.

Its current London services are completed by the Stobart Air-operated routes at London Southend which commenced on 17 May, when the airline launched flights from Newquay to London Southend. In addition, it now flies to Antwerp, Caen, Rennes, Munster/Osnabrück, Groningen and Maastricht. With the exception of the double-daily services to Dublin beginning on 26 October, these London Southend routes are predominantly targeting inbound leisure traffic into London rather than the high-yielding business passengers that frequents London City.

Return of the Flybe

So it could be argued, that Flybe’s big return to the capital has been saved until last week with its soft launch to Scotland’s capital. Over the next few weeks it will add the following services from London City, offering up to 18 daily flights (Monday to Friday) on 78-seat Dash 8 Q400s from the downtown airport:

With the exception of the Amsterdam operation, which will operate on Saturdays and Sundays only, all of the services will fly into London City, making the airport a ‘virtual base’ with no night-stopping aircraft. 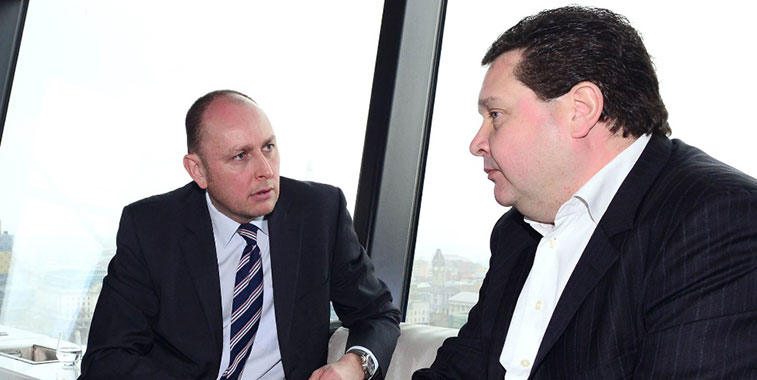 “Passengers will pay some premium to fly into LCY – although costs are also higher,” Flybe’s CCO Paul Simmons tells anna.aero’s Marc Watkins. The airline has been “warmly welcomed” by the corporate community in the business heart of London.

Simmons shoots the breeze with Watkins

anna.aero last caught-up with the mastermind behind Flybe’s network strategy in April, CCO Paul Simmons, when the London City flights were announced. In amongst the soft launch of operations last week, he found time to give us an update.

anna.aero: Your decision to move out of London Gatwick and into London City was a bold one. Any regrets?

Paul Simmons: “The decision to move in to London City was very quick and a major part of our re-focus on regional connectivity. It was also a two-way decision with LCY helping us in talks with the slot coordinator, ACL, with slot acquisition, as well as giving us some sensible guidance on our planned route network. Overall LCY made us feel very welcome.”

aa: With no night-stopping aircraft at London City – can you really call it a base?

PS: “The large programme of LCY route launches are all about first wave connectivity in which our aircraft will be among the first morning arrivals in the UK capital, combined with interlining and code share.”

aa: Surely the higher yields available at LCY will make it a sensible move?

PS: “Passengers will pay some premium to fly into LCY – although costs are also higher – however, our product will remain value-driven and we’ll continue to work on getting higher load factors which have already risen by some 10% in the past year.”

aa: Do you think any of your existing passengers will make the transition between airports? You also have the prospect of serving a brand new seam of wealthy customers in the Docklands financial district.

PS: “Yes it is a different proposition. But the transition is showing all the signs of success – awareness is very good, Flybe has the pull and trust of a brand which is not unknown to our new markets, and it has been warmly welcomed by the business community in Canary Wharf which has shown a great awareness of the amenity provided by our arrival and our new routes. This is more than we would normally expect when we arrive at other airports – as a result we have a lot of solid corporate contracting.”

aa: What about the catchment overlap with London Southend? (The airport is further along the Thames Estuary to the east of London, where new Flybe services also began this year).

PS: “This is simply explained – for us London Southend is predominantly a leisure market, whereas LCY is centred on business – there is a very clear differentiation.”

aa: Is there potential for more route growth at London City?

PS: “The number of future new routes will be based on what we think is best, after all new routes are not the only way to grow capacity – we can add new frequencies to existing routes too. The new management team has a rigorous route assessment model, but in all circumstances, we’re only going to grow when it’s profitable.”

aa: ‘White label’ flying (where the airline operates for Finnair and Brussels Airlines) is becoming increasingly important for Flybe. Any more partnerships on the cards?

PS: “We are talking with a number of other airlines.”