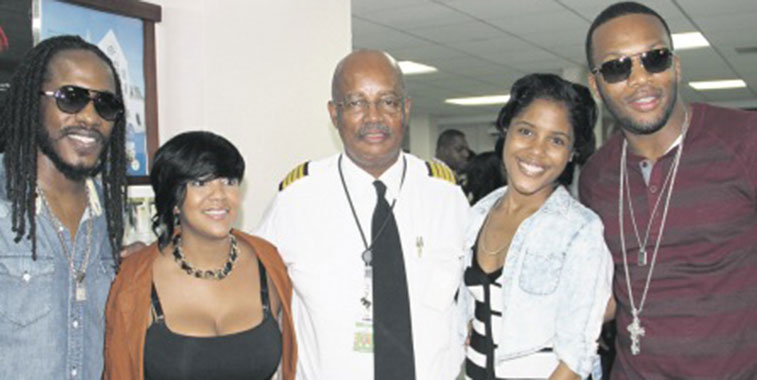 Covering an area of 215,000 square kilometres (around the same size as Romania), Guyana is a sovereign state on the northern coast of South America, being rich in gold and diamonds. Inhabited by 735,000 people, the country was initially colonised by the Dutch, while later, it became a British colony (known as British Guiana) and remained so until it achieved independence from the UK in May 1966. The aviation industry plays a significant role in supporting the economic and social growth of the country, with Guyana being served through two commercial airports providing scheduled airline services, namely Georgetown Cheddi Jagan and Georgetown Ogle. Cheddi Jagan, previously known as Timehri International Airport, is the primary gateway to Guyana, having handled 0.5 million passengers in 2013.

Examination of Innovata annual capacity reveals that around 460,000 one-way seats are offered on services involving Guyanese airports this year, representing a double-digit increase of 12% over the previous year. That said, both airports managed to post capacity increases when compared to 2013 figures, with Ogle doubling its annual capacity, while Cheddi Jagan posted 9.6% growth. In fact, the rapid expansion at Ogle comes as a result of LIAT having taken the decision to move all of its Cheddi Jagan operations to the airport located 10 kilometres away from the Guyanese capital, which was granted international airport status in 2009. Previously, Ogle was mainly used for domestic flights within Guyana. 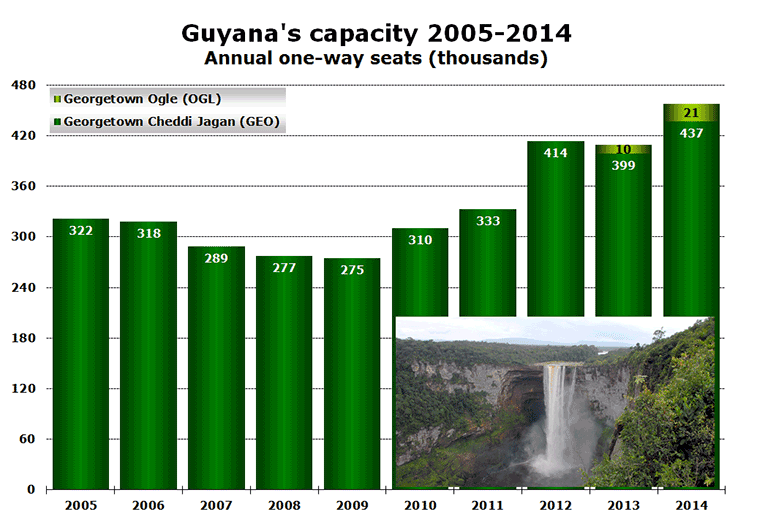 Overall, looking at the annual seat figures since 2005, the combined capacity of the Guyanese market grew by an average annual growth rate (CAGR) of 3.6%, with Cheddi Jagan’s capacity having visibly accelerated in the period after the global economic crisis. Not surprisingly, considering the country’s political and economic instability in recent years, the Guyanese aviation industry saw an uneven development between 2005 and 2014.

Caribbean Airlines commands 69% and 62% of seats and flights

As of October 2014, Guyana is served by a total of seven airlines, with Caribbean Airlines – the flag carrier of Trinidad and Tobago – being the dominant player in this country market, as it commands 69% and 62% of seats and flights respectively. The airline, which carried 2.9 million passengers last year, operates three airport pairs, to New York JFK, Toronto Pearson and Port of Spain, with the latter being its most frequently served destination with a total of 30 weekly flights from Cheddi Jaga. Ranking second with a weekly seat share of 14%, Fly Jamaica Airways connects Cheddi Jaga to Toronto and Kingston, with the former sector having been added on 17 December with weekly flights. 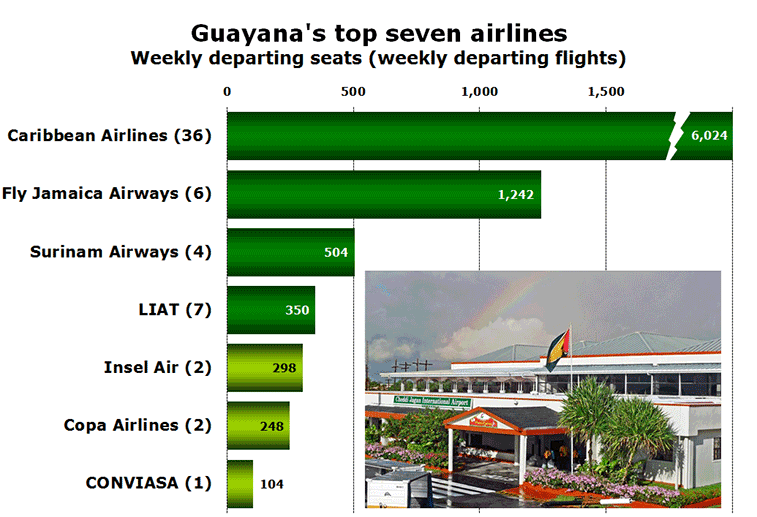 Total weekly seat capacity in Guyana has gone up 24%, with two out of the seven carriers recording growth, when comparing data from this October with the same week last year, while Surinam Airways and LIAT saw their operations unchanged. Fly Jamaica is the fastest growing operator, increasing its weekly capacity by 100% or 621 weekly seats over the last 12 months. Besides commencing weekly flights to Pearson last December, the latest Jamaican start-up has also added two further weekly flights on the 2,379-kilometre sector to Kingston. While no carrier posted capacity decline in the last 12 months, the Guyanese market has seen the arrival of three new airlines (highlighted in bright green), namely Insel Air from Aruba (twice-weekly), Copa Airlines from Panama City (twice-weekly) and CONVIASA from Puerto Ordaz (weekly).

A total of nine countries can be reached non-stop form Guyana according to Innovata schedule data for this October. At around 4,800 weekly seats and 4.6% more than in the corresponding week last year, Trinidad and Tobago tops the list of country markets served, with a combined total of 30 weekly flights operated by Caribbean Airlines from Cheddi Jaga. 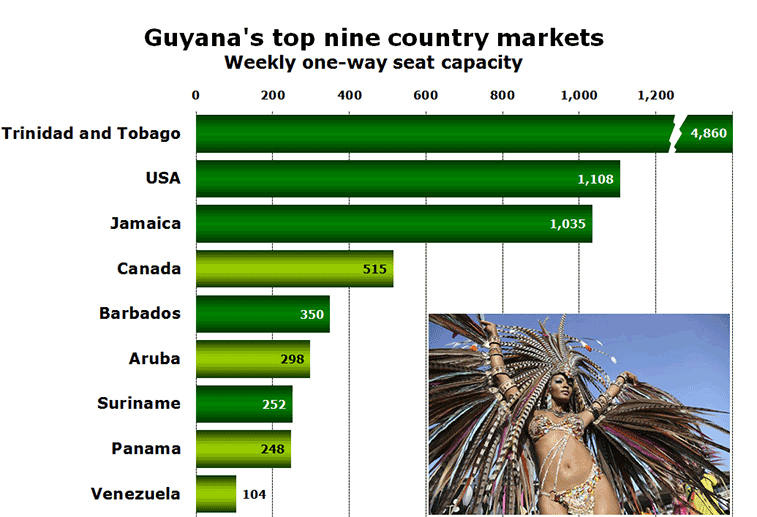 Jamaica has seen the most significant growth in weekly capacity, 67%, or an additional 414 seats, followed by the USA (24%) and this year’s top position. The USA, which is served by Surinam Airways and Caribbean Airlines, has seen a net growth of 214 weekly seats due to the latter’s additional weekly departure to New York JFK. Noteworthy is the fact that in the last 12 months, four new country markets have entered this year’s ranking, namely Canada, Aruba, Panama and Venezuela, while Caribbean Airlines has withdrawn its twice-weekly flights to Antigua and Barbuda.

On 22 July 2013, Georgetown Ogle Airport secured its first international airline, when LIAT touched down from Bridgetown, the capital of Barbados. This has come as a result of the carrier having taken the decision to move all of its operations from Georgetown Cheddi Jagan. The inaugural flight, which was operated utilising one of the airline’s Q300s, was welcomed with the traditional water arch salute by the Guyana Fire Service.