Strongest September for Airbus and Boeing; Qatar Airways receives its first A380 On 17 September, Qatar Airways celebrated the delivery of its first of 10 A380s on order, during a special ceremony held in Hamburg. Commenting on the delivery, Akbar Al Baker, CEO, Qatar Airways, said: “By introducing the A380 to our ever expanding fleet, it will strengthen Doha’s position as a key regional and global aviation hub. As we are continuously reviewing our passenger offering to always provide the very best in class, for us the arrival of this aircraft opens a new chapter in the unparalleled, signature service we provide to travellers on board with Qatar Airways.”

Following a weak August, both Airbus and Boeing stepped up their deliveries in September this year, improving on last year’s results by eight units. Besides the fact that Boeing maintains its leading position over Airbus in terms of aircraft delivered in the ninth month of the year, the American manufacturer continues to lead the 2014 delivery race by 85 units (up from 72 in August), and it is likely to win this year’s competition. When compared to the first nine months of 2013, the two producers managed to increase their combined deliveries by 50 units, with 971 aircraft incorporated by carriers into their respective fleets so far in 2014.

The combined deliveries of both manufacturers for the ninth month of the year, was 121, of which 67 came from the American producer, and 54 from its European counterpart, making it the best September since anna.aero began collating delivery data. Noteworthy is the fact that Boeing improved its performance when compared to the same month last year, delivering five more units, while Airbus handed over three more airframes. Overall, 71% of all September deliveries were single-aisle aircraft, which is up 3% from last month’s figures. 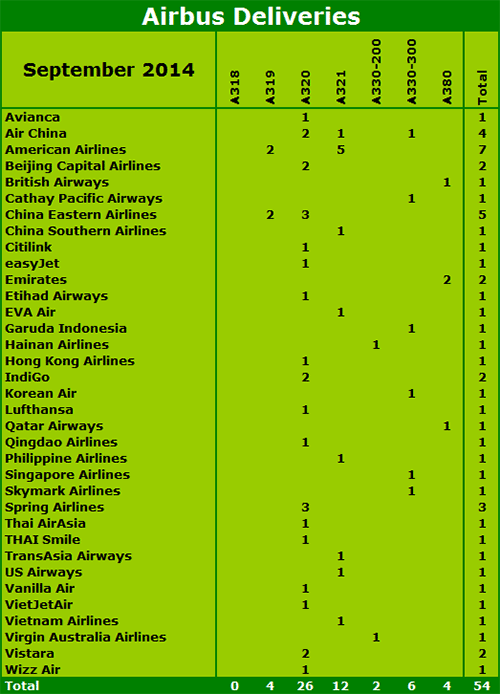 Airbus ended September with a total of 54 units delivered, which constitutes 17 more airframes than the amount delivered in August 2014 and three more than in the corresponding month last year. Over the nine completed months of 2014, the European manufacturer handed over 443 units, representing a decrease of 0.5% (two fewer units) on the same timeframe last year.

Once again, single-aisle deliveries in September were led by the A320 (26 units) with 42 narrow-body aircraft provided to carriers around the world. The oneworld member, American Airlines, was one of four airlines to receive more than two narrow-body units from Airbus, as it incorporated five A321s and two A319s into its fleet. Apart from this, other noteworthy carriers to receive more than two units were China Eastern Airlines (three A320s and two A319s), Air China (two A320s and one A321) and China’s largest low-cost airline — Spring Airlines (three A320s); while three other carriers saw two Airbus narrow-bodies join their respective fleets in September — Beijing Capital Airlines, IndiGo and Vistara, each with two A320s.

Looking at September’s wide-body deliveries, Airbus handed over 12 airframes in August, accounting for five more units than in the preceding month, and one more than in the corresponding month of 2013. Following August’s delivery of a single A380, the European producer handed over four units of the type in the ninth month of 2014, two to the largest operator of A380s — Emirates, and one each to British Airways and Qatar Airways. In fact, the Doha-based carrier took delivery of the first of its 10 A380s on order on 17 September. On 28 September, Air China took delivery of a new 777-300, which was painted in a special livery of “Love China”. The last unit of a total of 20 the airline had on order, it will serve the Beijing-Shanghai Hongqiao airport pair starting on 29 September; while from end-October it will operate long-haul flights from Beijing to Vancouver. Since the delivery of the first 777-300 in June 2011, this aircraft type has become the backbone of Air China’s long-haul fleet. 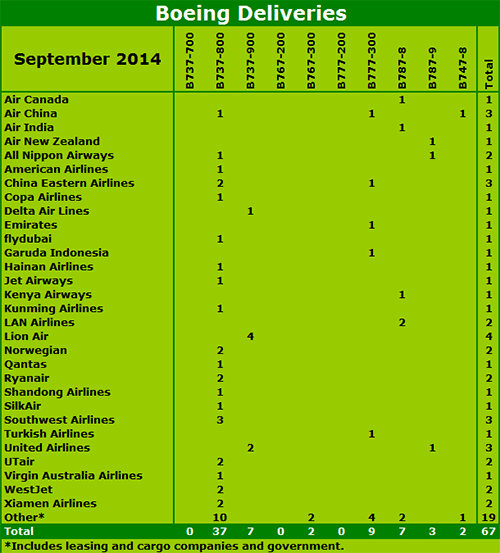 Carriers received a total of 44 narrow-bodies from the American producer, seven more than in the preceding month. The fifth largest LCC in the world and the biggest in Asia with 34 million passengers in 2013 — Lion Air, was also the largest recipient of the 737 family in September, as it incorporated four 737-900s into its fleet. Ranking second in terms of single-aisle deliveries, Southwest Airlines (which is classified as the world’s biggest LCC with over 133 million passengers in 2013) took delivery of three 737-800s. In addition, seven other operators received more than one single-aisle unit from Boeing, namely United Airlines with two 737-900s as well as China Eastern Airlines, Norwegian, Ryanair, UTair, WestJet and Xiamen Airlines, each with two 737-800s.

A total of 23 wide-body airframes were delivered by Boeing in September 2014, one fewer than in August. Moreover, the American manufacturer handed over the same amount of aircraft delivered in the corresponding month of 2013. Following 13 and seven 787-8s delivered to carriers in August and July respectively, Boeing delivered a total of seven units of the type reaching customers in September. Noteworthy, LAN Airlines took delivery of two 787-8s, while five other carriers incorporated one unit each into their fleets. Besides this, All Nippon Airways and Air New Zealand received their second 787-9, and United took delivery of its first unit of the type on 3 September.