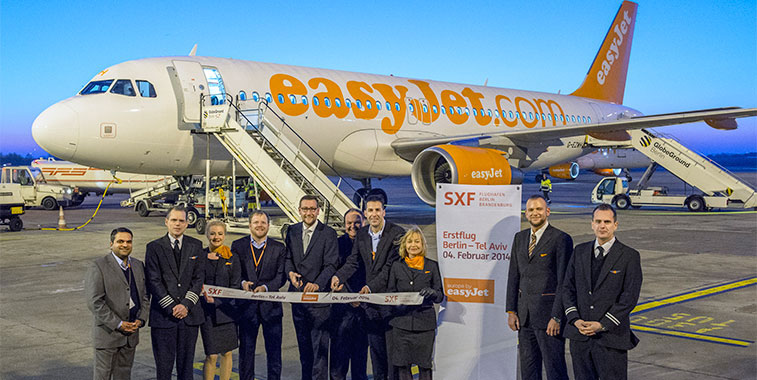 Despite all of the well-documented issues in the Levant region, Israel’s biggest airport ‒ Tel Aviv Ben Gurion International ‒ continues to thrive. Having delivered a robust 8.3% annual growth in passenger figures in 2013 with traffic rising to 14.23 million passengers – making it the world’s 115th busiest airport – records will be broken again in 2014, seeing the airport break the 15 million mark for the first time, and possibly even 16 million. This is likely because of the double-digit growth predicted by Innovata’s Diio Mi schedule data, which sees annual seats at the airport increasing 13% from 7.22 million in 2013 to 8.18 for 2014. Taking the airline’s schedule information down to a more micro level, data for the week commencing 7 October shows that seats have increased 12% and weekly flights by 14% since the same week last year. 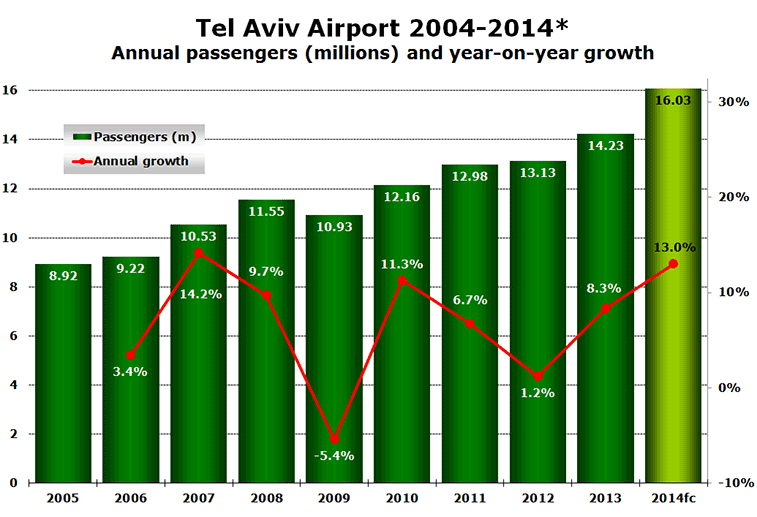 The #1 country market of Germany has maintained its top spot, as a result of its 8.5% annual growth. However its position has come under increasing pressure from the #2 market of Italy, which has leapfrogged Russia into second place with a 26% year-on-year rise. As with last week’s airport profile on Moscow Vnukovo, the biggest reduction in weekly flights in the last year has been to Ukraine, which has seen its capacity fall 17% from 36 weekly flights in October 2013 to 30 this year ‒ obviously for the ongoing political reasons. The largest annual increase was witnessed on routes to Greece which have grown by a massive 200% over the past year, seeing it jump from #19 market to #8. The domestic market, highlighted in light green, has remained unchanged over the last 12 months. 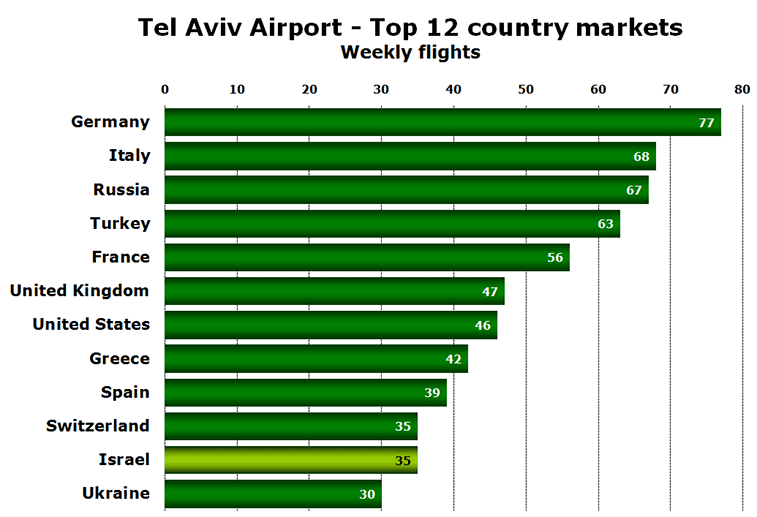 Country markets which have been added to the Tel Aviv network portfolio since last October include Serbia (daily flights), Croatia (four weekly), Belarus (three), Lithuania (three), Portugal and Slovenia (two each), Armenia and Tanzania (one each). Air Serbia’s arrival on 27 October from Belgrade, with its four times weekly (now daily) service explains the inclusion of Serbia in the country markets listing, whereas two carriers have driven the new links between Croatia and Tel Aviv. Croatia Airlines added weekly services (now twice-weekly) from Zagreb on 13 May and weekly services from Dubrovnik on 30 June, with Sun d’Or International Airlines commencing weekly Zagreb services this summer, starting on 2 August. The net gain of countries is eight, as no markets have been lost over the past 12 months.

The top 10 airlines command nearly two-thirds of weekly seats, leaving the remaining 40% to be split across the other 47 serving carriers at Tel Aviv. While some of the names have changed since last October – for example Ukraine International Airlines has dropped out of the top 10 following the removal of six weekly flights ‒ the top 10 airlines’ proportion of Tel Aviv’s flying has dropped marginally, falling from 64% 12 months ago. The #1 carrier El Al has contracted by 3% at its main base over the last 12 months, but all other Israeli carriers, Arkia, Sun d’Or and Israir Airlines, have posted healthy growth of 24%, 900% and 107% respectively. 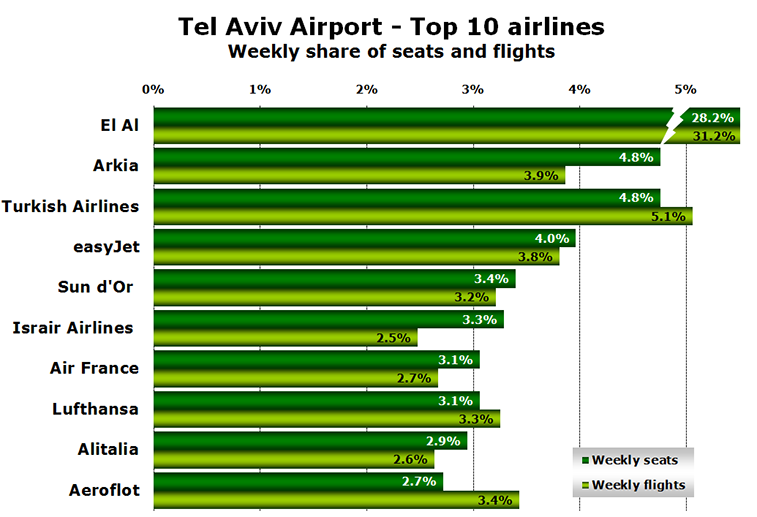 The roll call of serving carriers at Tel Aviv has been boosted by the arrival of seven airlines since last October, with the likes of Air Serbia, Belavia, Croatia Airlines, Adria Airways, Volotea and TUIfly being joined by transavia.com France, which along with thrice-weekly services from Paris Orly launched on 10 April, has started weekly operations from Lyon this week on 12 October. Over the same period, the airport has seen the withdrawal of operations by UTair, Travel Service Hungary, Jet2.com, Air Onix and Travel Service Polska.

Atatürk pushed aside by Paris CDG

In the last 12 months, the route to Istanbul Atatürk has tumbled from top spot to third following a 12% annual decline, with the #1 position being claimed by Paris CDG despite a 1.4% marginal trimming of weekly seats. However total weekly seats to Istanbul have grown to 12,273 from 10,804, due in part to Turkish Airlines launching daily services to Tel Aviv from Istanbul Sabiha Gökçen on 27 October 2013. Also leaping ahead of Atatürk is Rome Fiumicino, which has posted a double-digit annual growth of 17%, seeing it climb to being Tel Aviv’s second most important route from fifth last October. Routes to Europe dominate the top 12, with New York’s JFK and Newark airports, along with the domestic route to Eilat (all highlighted in light green), being the only city pairs outside the most important region for the airport. 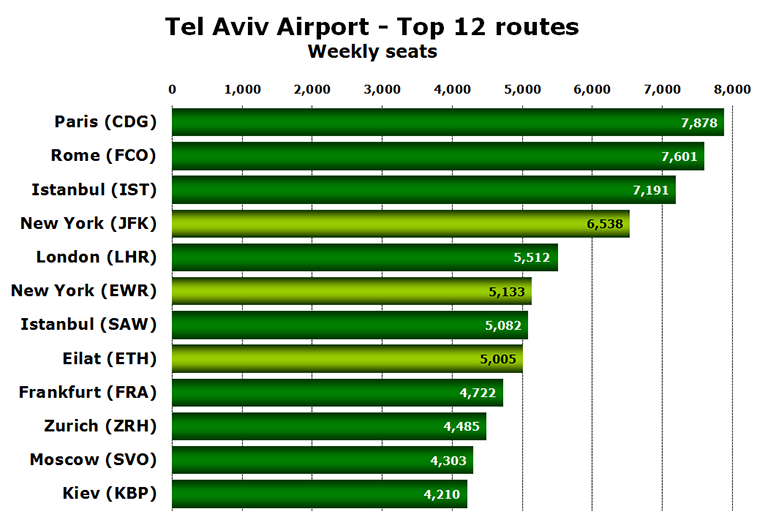 Aside from the dramatic ascendancy of Sabiha Gökçen (+92% year-on-year), services to Moscow Sheremetyevo have climbed from 14th to 11th place – nearly 21% more seats than a year ago. The addition of a fourth daily service by Aeroflot, seeing it grow from 17 to 24 weekly flights, helps to explain this rise. However, weekly seats from Moscow’s two other airports ‒ Domodedovo and Vnukovo ‒ have fallen from 6,935 to 5,895 in response to the growth at Sheremetyevo. The biggest decline in weekly seats was encountered on services to London Heathrow, which tumbled by 21% since last October, due primarily to British Airways trimming six weekly flights from its flying programme.