On 21 November last year, Lima Airport (also known as Jorge Chávez International Airport), saw the arrival of JetBlue Airways, with daily flights from Fort Lauderdale. Addressing to the audience shortly before the inaugural flight from the US airport is JetBlue’s EVP, Eash Sundarum.

While it is home to an estimated population of 31 million, Peru covers an area of almost twice the size of Ukraine, being classified as one of Latin America’s best-managed economies, following an annual growth rate of 6.4% in GDP over the last decade. In fact, poverty has fallen sharply in Peru, dropping from 55% in 2001 to 28% in 2011. This impressive economic performance has been tied to exports of copper, gold, zinc, textiles, chemicals and pharmaceuticals, which have provided strong currency to finance imports and external debt payments. Benefitting from this favourable economic climate, the country’s airports have grown their combined annual capacity by 7.6% since anna.aero last looked at this market two years ago.

According to Innovata schedule data for 2014, the Peruvian market is being served by 21 commercial airports, of which Lima (perhaps better known as Jorge Chávez International Airport) controls 63% of the country’s scheduled seat capacity. Besides Lima, there are other three airports to offer international services, namely Cuzco, Arequipa as well as Iquitos.

Examination of Innovata annual capacity reveals that over 15 million one-way seats are offered on air services involving Peruvian airports this year, representing a modest decrease of 0.5% when compared to 2013 figures. At 0.4%, international traffic experienced growth, while the domestic sector noted a decrease of 0.9% when compared to the previous year. 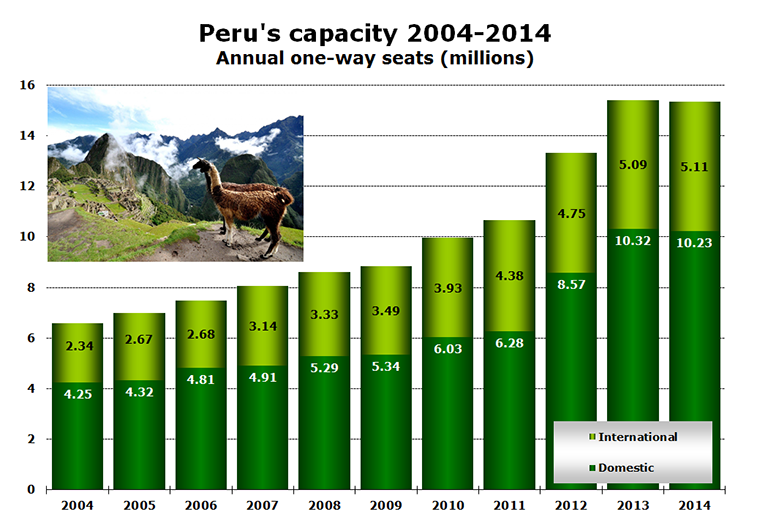 Looking at annual seat figures between 2004 and 2014, the combined capacity of the 21 Peruvian airports grew with an average annual growth rate (CAGR) of 7.9, with the domestic sector outperforming the international market. Noteworthy is the fact that the domestic air travel has increased by 140%, while the international one has gone up 118% this year when looking back 11 years to 2004. Even in the worst period of the global economic recession, Peruvian capacity continued to grow, recording in 2009 a yearly increase of 4.9% when compared to the previous year.

LAN controls over half of weekly capacity

As of October 2014, the top 12 carriers serving the Peruvian market account for 96% and 97% of all weekly seats and flights respectively. LAN Airlines remains by far the dominant operator in Peru, as it commands over half of the market, being three times bigger than the second operator, Avianca. The oneworld member, which carried close to 30 million in 2013, operates a total of 38 airport pairs, of which half of them are international routes. Therefore, Santiago is LAN’s most frequently served destination with nine daily flights from Lima, followed by Bogota and Buenos Aires Ezeiza, both with thrice-daily services. Furthermore, LAN has a 62% share of weekly seats in the Peruvian domestic market, on which it directly competes with Star Peru, Avianca, LC Peru and Peruvian Airlines, with the latter having commenced daily flights from Lima to La Paz operated via Cuzco on 15 October. Overall, LAN, Avianca, Peruvian and Star Peru combined, make up 88% of total capacity this month, with no other airline having more than 2% capacity share in Peru. 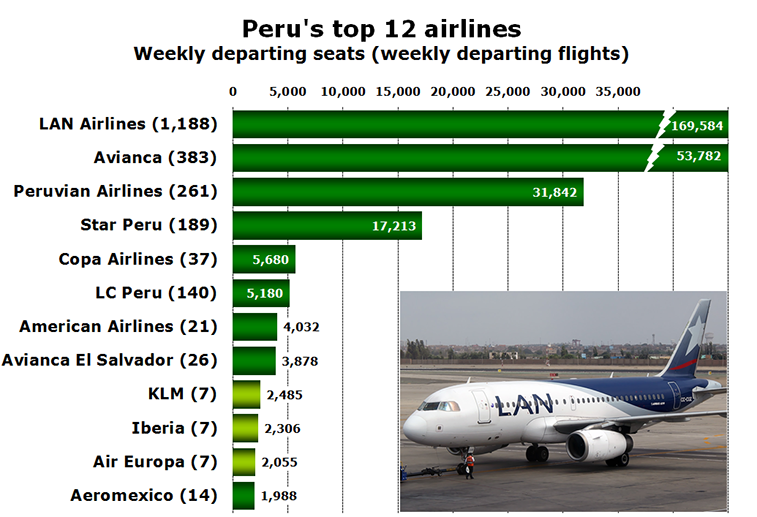 Total weekly seat capacity in Peru has gone up 1.4%, with five of the top dozen carriers recording growth, when comparing data from this October with the same week last year, while KLM saw its operations unchanged. As a result of having integrated TACA Airline’s operations as part of their merger, Avianca is the fastest growing carrier, with an impressive net increase of 52,342 weekly seats or 3600% over the last 12 months. With the completion of the merger, TACA became officially Avianca El Salvador, retaining 7.4% of its former operations to serve Rio de Janeiro Galeao, Sao Paulo Guarulhos and Porto Alegre in Brazil, as well as Havana in Cuba, from Peru’s busiest gateway. Besides this, LC Peru, the Lima-based airline, noted the greatest capacity decline (-17%), due to reducing its frequency on three domestic sectors from its base, namely to Andahuaylas, Huanuco and Tingo Maria.

Interestingly, three European carriers (highlighted in bright green) have entered this year’s ranking, namely KLM from Amsterdam as well as Air Europa and Iberia from Madrid. In addition, the Peruvian market is also served from Paris CDG, by Air France with four weekly flights. Over the last 12 months, the Peruvian market has witnessed the departure of TACA and LACSA, both of which have been absorbed by Avianca, and the arrival of TAM Paraguay with thrice-weekly flights from Asuncion as well as JetBlue Airways with daily services from Fort Lauderdale on 21 November.

While the domestic sector is Peru’s biggest country market representing 68% of all weekly seats, 21 countries can be reached non-stop from Peruvian airports according to Innovata schedule data for this October. At over 18,000 weekly seats, and 0.5% more than in October 2013, the USA remains the dominant international market, being served by seven carriers (American Airlines, Avianca, JetBlue, Delta Air Lines, LAN, Spirit Airlines and United Airlines) with a combined 87 weekly flights from Lima. 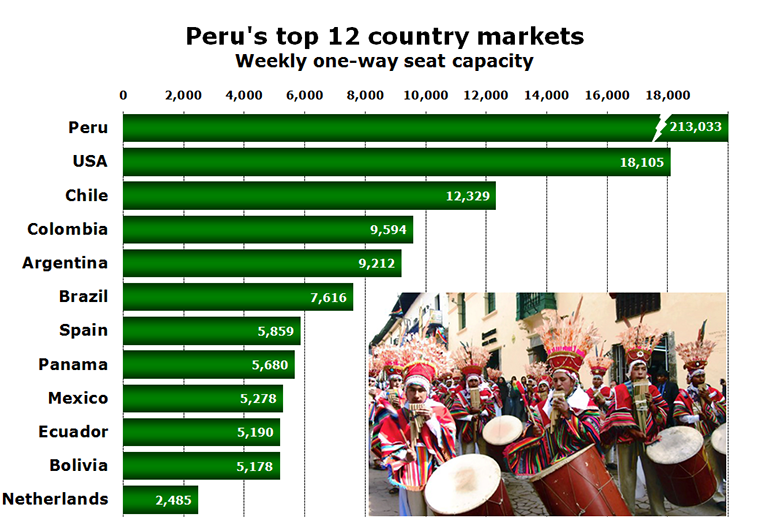 Neighbouring Colombia has seen the most significant growth in weekly capacity, 42% or an additional 2,812 weekly seats, as a result of Avianca increasing its frequency to Bogota, Medellin and Cali as well as LAN’s additional daily flights to Bogota. Besides Peru, which has posted a 0.1% fall in weekly seats, Argentina and Ecuador are the only country markets that have posted capacity declines this month, -4.1% and -15% respectively. Surprisingly, Netherlands is a new entrant into this year’s ranking, even though KLM saw its Peruvian operations unchanged. This has come as a result of services to Venezuela (ranking 12th last year) having decreased by 65% this October. The dominant carrier in the Peruvian market, LAN, has decreased its frequency on the 2,742-kilometre sector from Lima to Caracas by four weekly flights to thrice-weekly over the last 12 months.