With extreme seasonality in its operations, SmartWings’ fleet tends to be flexible with aircraft ‘borrowed’ from various places for the peak summer season. This summer the 737-800 fleet has seen aircraft previously operated by SpiceJet and Sunwing Airlines, while two of the airline’s A320 are leased from Holidays Czech Airlines.

Launched on 1 May 2004 (on the day the Czech Republic joined the EU) with flights from Prague to Amsterdam, Copenhagen, Madrid, Paris CDG and Zurich, SmartWings was the Czech Republic’s first LCC. A subsidiary of Travel Service, which operates charter flights across Central Europe and provides ACMI services across the world, SmartWings now operates scheduled services from Prague, Ostrava and Brno. In reply to queries from anna.aero, an airline spokesperson revealed that Travel Service will operate 33 aircraft this winter (a mix of 737-700s, 737-800s and A320s) from bases in the Canary Islands, Czech Republic, France, Hungary and Poland, as well as ACMI operations for carriers such as Air Transat, Sunwing Airlines and Oman Air. In 2013 Travel Service carried more than 5.1 million passengers. 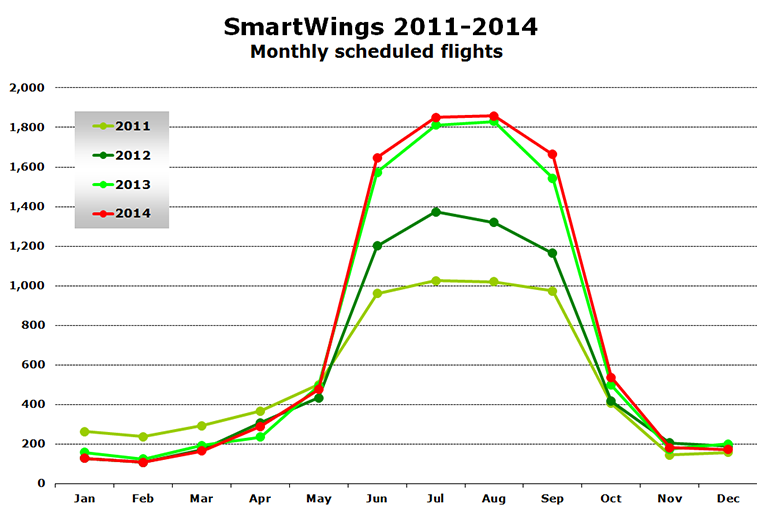 In 2011, SmartWings operated around 4.3 times as many flights in August as in February. Since then, this ratio has increased to 12.6 in 2012, 14.6 in 2013 and 17.1 in 2014. As a result the airline’s seasonality rivals that of other leisure airlines across Europe such as Jet2.com, Monarch Airlines and Volotea.

Greece is #1 market and fastest-growing in 2014 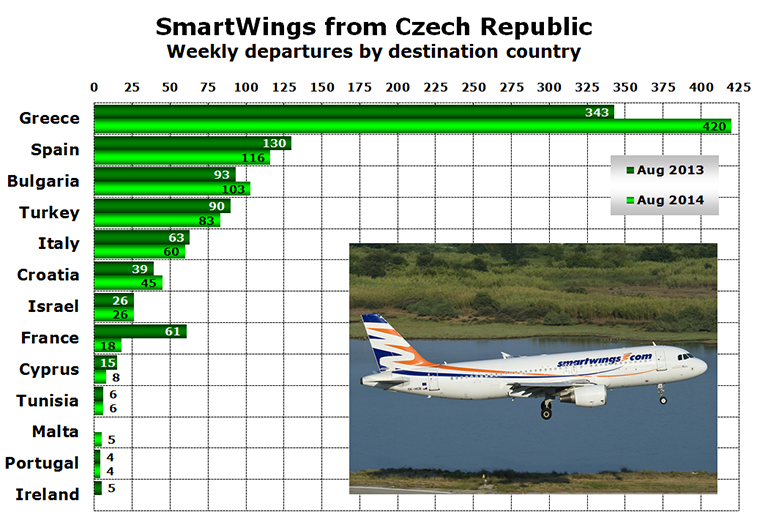 The only other country markets registering an increase in flights this summer are Bulgaria and Croatia. A total of 12 country markets have been served by SmartWings in each of the last two summers, with Malta replacing Ireland in 2014. A total of 46 airports were served by SmartWings’ scheduled services in summer 2014. Not surprisingly, the airline’s three bases offered the most flights with Prague (144 weekly departures) having five times as many flights as Brno (29) and Ostrava (27). The most regularly served destinations were Bourgas (with 26 weekly flights) followed by Heraklion (23), Antalya (19), Rhodes (18), Kos (16), Palma de Mallorca (12) and Zakynthos (ten). 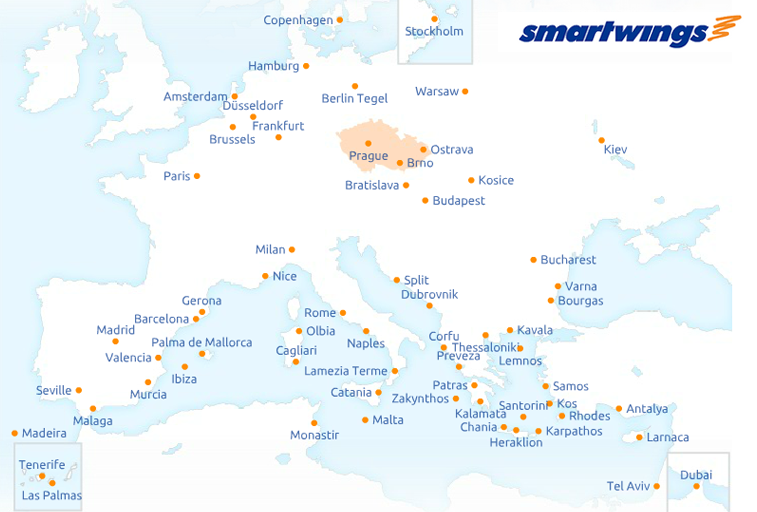 The vast majority of SmartWings’ flights head south after taking off from the Czech Republic. In fact, the majority of the major city routes in northern Europe are operated as codeshare services with the national carrier Czech Airlines. Greece is by far the leading country market during the summer months and saw flights increase by 22% this August compared with last August.

For an airline that operated a fleet of 43 aircraft in the summer of 2014 (according to the airline itself), Travel Service is not a high profile carrier. In 2007, Icelandair bought shares in Travel Service and increased its shareholding to 80% in 2008. However, it then gradually reduced its stake in the company before selling its remaining 30% minority stake in February 2013 for USD 3.7 million. These shares were apparently sold to the airline’s existing shareholders. According to the spokesperson the airline’s current shareholders are Global Trade Opportunities (G.T.O.) AB (a Swedish company), Roman Vik (the airline’s CEO), and Canaria Travel (a major Czech tour operator).