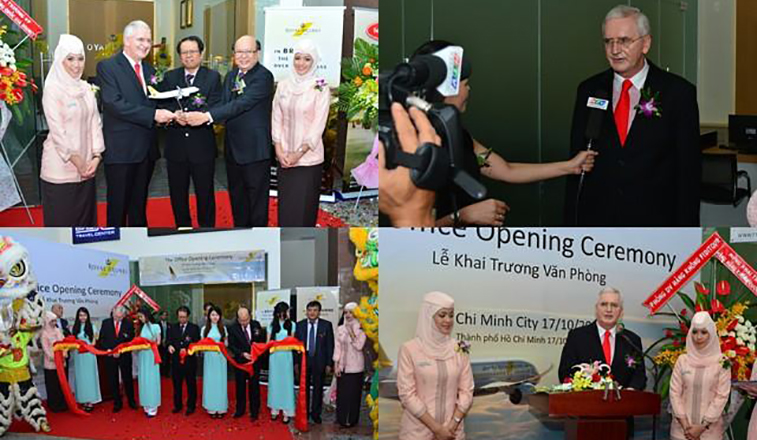 As part of its 2014 expansion, Royal Brunei Airlines resumed services on the 1,120-kilometre sector to Ho Chi Minh City with four weekly flights on 17 October. The route, which was last served in October 2011, was celebrated at the Vietnamese airport with a ribbon cutting and a press conference.

Founded in 1974 with two 737s to provide services from Bandar Seri Begawan to Singapore, Hong Kong, Kota Kinabalu and Kuching, Royal Brunei Airlines has expanded considerably, offering flights to a total of 14 destinations in 12 countries within Europe, the Middle East, Asia as well as Australia this October. The wholly-government owned carrier of Brunei itself promotes the fact that it operates a fleet of six Airbus units on short- and medium-haul (two A319s and four A320s). Besides this, the Bandar Seri Begawan-based operator has the distinction of operating the youngest long-haul fleet in the world, with the recent deliveries of four 787-8s. Nevertheless, its strategic plan is to incorporate seven A320neos into its fleet, starting from 2018 to accommodate future growth.

The biggest carrier at Bandar Seri Begawan (where it commands around 77% of all weekly seats this October, followed by Cebu Pacific Air and Singapore Airlines with 8.9% and 5% respectively), Royal Brunei carried 1.1 million passengers in 2013, representing an increase of 6.8% over the previous year. As a matter of fact, 2013 was a good year for the carrier, as its load factor went up 1.2% and ASKs grew by 4.9%. With two new additions to its network in 2014, including the resumption of services to Ho Chi Minh City (a sector last served in October 2011) on 17 October with four weekly flights, Royal Brunei is likely to continue its growth this year. 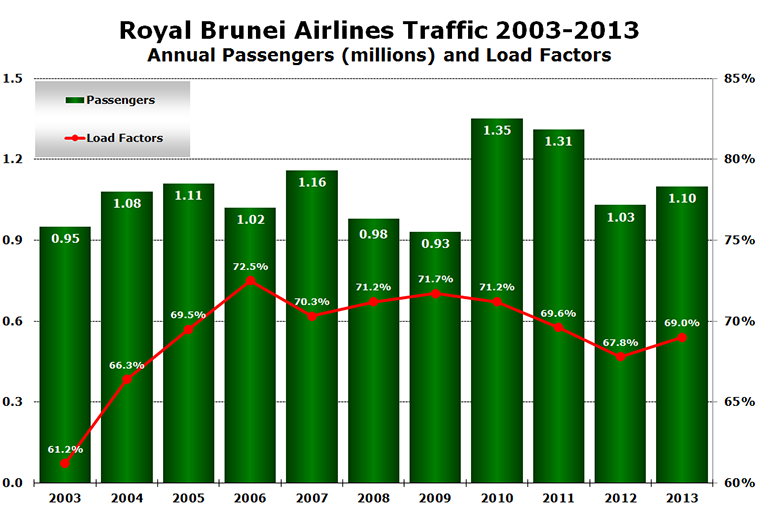 Overall, looking at passenger development since 2003, the airline has had a fluctuating pattern, as a result of a period of operational rationalisation. While for most of the last 12 years the airline has carried around one million passengers, peaking in 2010 at almost 1.4 million, Royal Brunei recorded an annual average growth rate (measured in CAGR) of 1.3% over the 2003-2013 timeframe. In addition its load factors have oscillated between 61.2% and 72.5% over this period.

Singapore and Kuala Lumpur are most frequently served cites

According to Innovata schedule data for this October, the airline operates 14 non-stop services to 12 countries. The airline’s network is relatively stable with Kuala Lumpur and Singapore being the most frequently served destinations with twice-weekly departures from its hub, using a mixed fleet of 144-seat A320s, 122-seat A319s and 254-seat 787-8s. In fact all of the carrier’s routes are being operated from Bandar Seri Begawan, with the only exception being the 5,504-kilometre sector from Dubai to London Heathrow (highlighted in bright green), which is served daily as part of the carrier’s longest sector from its hub to the UK’s primary gateway. 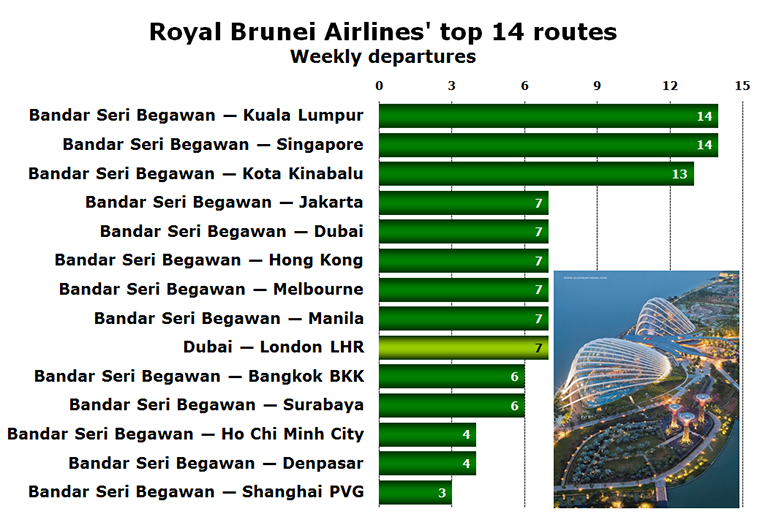 Royal Brunei’s weekly departures posted 8.2% growth this October, with only the 1,365-kilometre airport pair to Surabaya growing, as a result of the carrier adding two additional weekly flights over the past 12 months. By comparison, operations to Bangkok Suvarnabhumi decreased by two weekly flights to six times weekly.

On the other hand, analysis of which of Royal Brunei’s routes offer the most capacity, measured by ASKs (Available Seat Kilometres), still sees Bandar Seri Begawan-Dubai top the list, even though the 6,727-kilometre sector experienced 11% capacity decline this October due to the carrier replacing its phased out 777-200 operations with 787-8 flights. Unsurprisingly, the top three routes are on long-haul, being served daily by the airline’s recently delivered 787-8s. 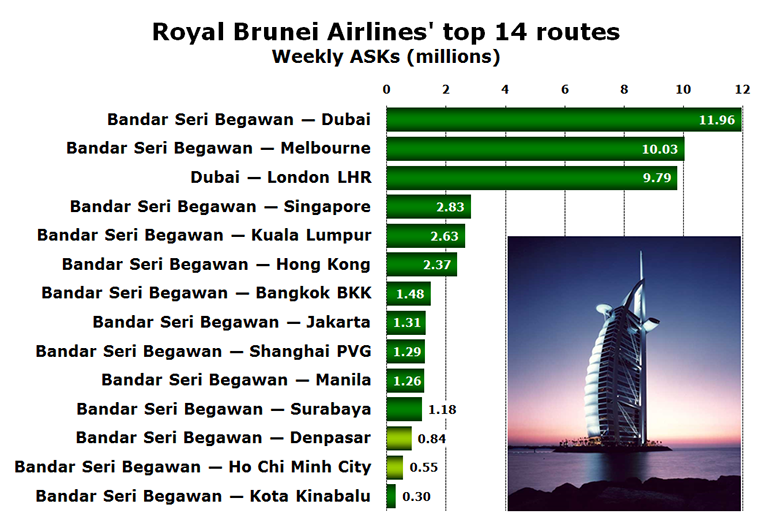 This October, the carrier’s weekly capacity measured by ASKs decreased by 8.1%, with eight of its 14 routes declining, while services to Ho Chi Minh City and Denpasar were added on 17 October and 26 July respectively. Nonetheless, operations to Surabaya (+51%), Hong Kong (+18%), Jakarta (+13%) and Kuala Lumpur (+0.4%) posted capacity growth over the last 12 months.

Even though Brunei gained its independence from the UK on 1 January 1984, the country kept strong ties with the British nation. As a consequence, on 16 October Royal Brunei has signed a deal with British Airways to expand its network by adding a further six UK destinations via Heathrow. The deal allows Royal Brunei passengers to book single-ticket flights to Manchester, Glasgow, Leeds Bradford, Edinburgh, Aberdeen and Belfast on BA’s domestic operations. Commenting on the agreement, Dermot Mannion, Deputy Chairman, Royal Brunei, said: “As the only airline to guarantee a 100% Dreamliner service on all long-haul flights, extending our route network to the UK through our partnership with BA means that even more passengers are now able to fly in comfort to a broad range of destinations in the Middle East, Asia and Australasia.”