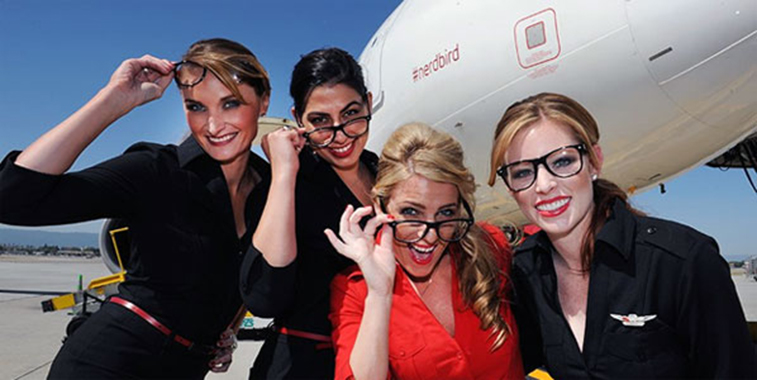 It was all smiles in May 2013, when Virgin America started up to four daily flights from Los Angeles into San José – unfortunately the service was cancelled in May this year. Despite this set-back for the North Californian airport, it is on course to surge past nine million annual passengers due in part to annual growth from the likes of Delta Air Lines and US Airways.

San José is the 10th largest city in the United States with a population of close to one million and is home to Silicon Valley – the high-tech innovation and development hub. A city of immigrants, 40% of San José’s population is foreign-born and its total population is projected to grow to over 1.2 million by 2025. The city, which is the largest in Northern California, and its wider catchment of around four million inhabitants, is served by Mineta San José International Airport – the 41st busiest in the US in 2013.

With annual traffic levels having plunged to a low of 8.2 million in 2010, San José is continuing to rebuild its passenger volumes and is on course to break nine million passengers for the first time since 2008, according to anna.aero forecasts. For the first eight months of 2014, the airport has attracted a healthy 6.8% growth in its passenger numbers. 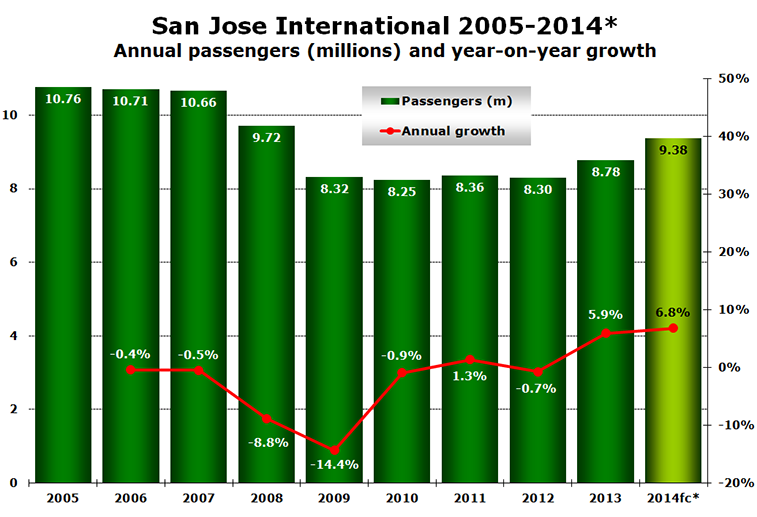 International traffic continues to become increasingly important at the California airport, having grown 22% year-on-year so far in 2014. In 2005, international traffic represented just 2% of total passenger volumes at San José. Looking at figures available so far in 2014, this has now almost doubled, rising to 3.8% of total traffic. While the airport has international services to Mexico (Alaska Airlines and Volaris both currently fly to Guadalajara; the former re-starts seasonal San Jose del Cabo operations on 23 October) and Japan (All Nippon Airways flies to Tokyo Narita), what the airport would really like is a service to Europe. Indeed, it came close to beating New Orleans in anna.aero’s recent evaluation of British Airways’ next potential US service.

Entering San José’s monthly passenger data for 2013 into anna.aero’s Seasonal Variation in Demand (SVID) calculator, the airport performs very well, generating a score of 1.14 ‒ an ‘excellent’ rating. With over 60 seasonality performance evaluations completed so far in 2014, the airport will be encouraged by its global ranking of 14th, lodging in between Brasilia (1.11) and Geneva (1.17). The airport’s seasonality performance has declined when compared to the result achieved in 2012, when it attained a score of 0.84, however we are sure that the passenger growth is worth the increased ‘peakiness’ of the annual operation.

LAX leads, but falls by 18% year-on-year

The airport’s top 10 routes constitute 81% of San José’s weekly seats in the period under evaluation, a result which is down slightly year-on-year from 82.3%. While the total weekly seats have increased by 3.3%, the #1 market, to Los Angeles, has fallen by over 18%, as a result of losing 26 weekly services by Virgin America in May. 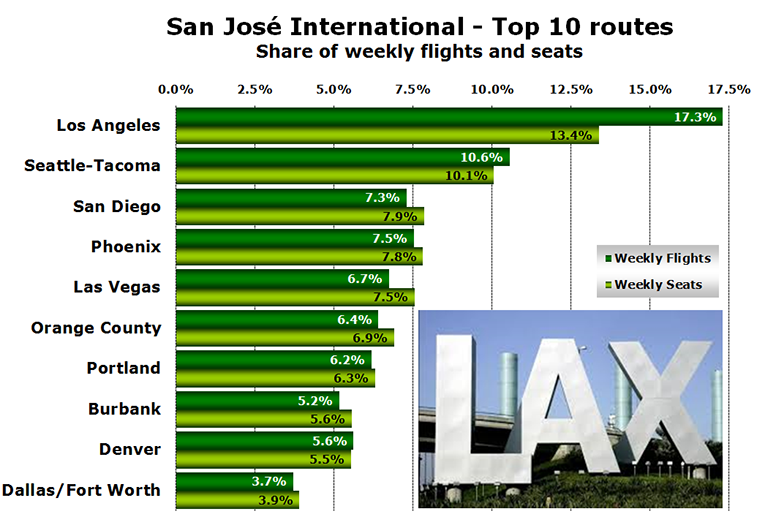 The route that posted the biggest annual rise in weekly seats was Seattle-Tacoma, with a 57% increase since last October, and seeing the city pair leap into the #2 spot. Half of the airports in the top 10 have shown annual seat growth, with two being flat (Orange County and Burbank) and the remaining three seeing capacity falls. Over the last year, the airport has ‘lost’ services to just one destination – San Jose del Cabo in Mexico. Curiously, according to Innovata schedule data, the Alaska Airlines service to the Mexican city has been suspended between 28 September and 23 October, and therefore this suspension falls inside the week being analysed. As a matter of fact, the suspension of San Jose del Cabo service, came as a result of Hurricane Odile, which has damaged both the Mexican airport and the surrounding tourism region. Nevertheless, the route was resumed on 23 October.

Although recording a marginal growth of just an additional seven weekly flights, Southwest Airlines easily maintains its top ranking at San José, with one in every two flights being operated by the LCC. Delta Air Lines has scooped the headlines however, growing its weekly flights to 120 from 79 in the same week last year, helping lift its share at the airport from 9.0% to 13.5%, and pushing American Airlines into fourth place. As part of its rapid expansion at Seattle-Tacoma, the SkyTeam carrier has added 27 weekly flights into San José from its Washington state hub since last October, in addition to an extra 11 weekly flights to Los Angeles and four more rotations into Salt Lake City. It has not all been growth for Delta, as it trimmed capacity to Minneapolis-St. Paul, albeit by just one weekly flight. 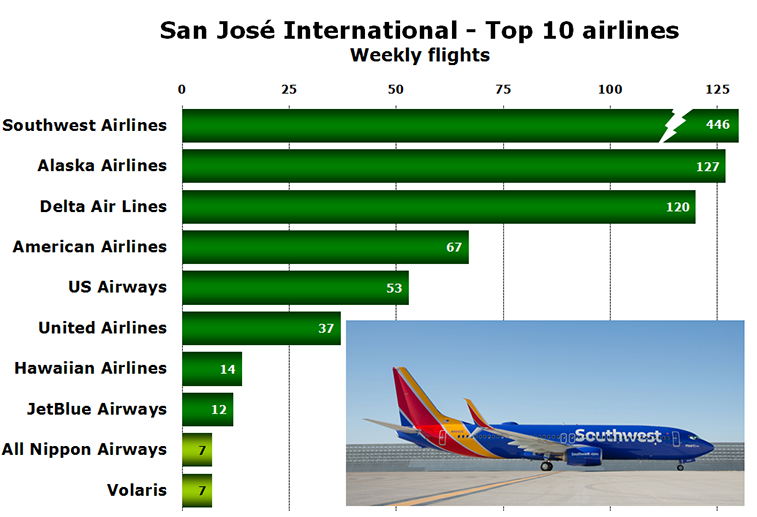 Along with the already discussed withdrawal of Virgin America, Alaska, American and United Airlines have all cut back capacity over the past 12 months. American was the biggest culprit, and while not culling any individual routes, has removed 17 weekly flights from its Los Angeles route. This reduction however, has been more than offset by increased flying by US Airways (soon to be American), which has started 18 weekly services from Los Angeles (along with an extra weekly flight to Phoenix) since last October.