As of October 2014, the fastest growing country pair within the Middle East is the link between Qatar and Saudi Arabia, which has increased by 25% or 4,184 weekly seats. This was due in part to Qatar Airways having launched services to its seventh destination in Saudi Arabia on 15 May, Hofuf.

According to Innovata schedule data for this October, weekly capacity within the Middle East, a region that has been a major centre of world affairs, has grown by 1.1% in the last 12 months, with around 1.7 million weekly departing seats offered in this area. In the same timeframe, weekly departing flights have decreased by 1.9%, while ASKs have gone down 0.6% to 1.4 billion ASKs being offered this month.

The top 12 country pairs account for 54% all weekly seats provided within the Middle East, which represents the same share as in the corresponding week of 2013. The Saudi Arabian domestic sector has managed to maintain its top position this year, with capacity in this country market having increased by an impressive 16% or 55,000 weekly seats. Only two carriers are operating in the Saudi Arabian domestic market this month, with Saudi Arabian Airlines being the dominant player as it commands around 79% of weekly capacity, while the remainder is offered by the country’s first and only LCC, flynas. However, Qatar Airways is looking to break into this duopoly, by launching a Saudi domestic airline — Al Maha Airways — by the end of November this year. The carrier intends to fly between cities such as Riyadh and Jeddah, competing with Saudia and flynas.

While the top seven positions have remained unchanged, there have been movers in this year’s top dozen. Noteworthy, a new entrant into this year’s ranking is that of #12 country pair, the UAE to Jordan (highlighted in bright green), which experienced double-digit growth of 15%, due to Emirates, flydubai, Etihad Airways and Air Arabia increasing their frequencies to the capital and most populous city of Jordan — Amman, from Dubai, Abu Dhabi and Sharjah respectively. 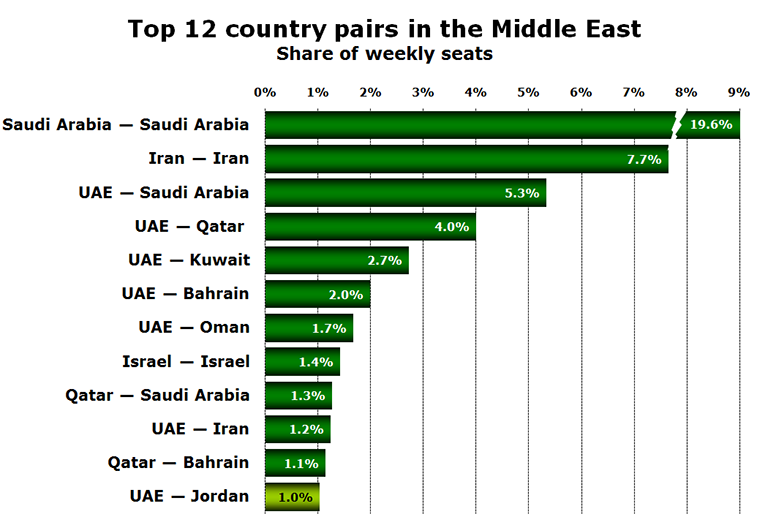 While weekly seat capacity has increased modestly by 1.1%, nine of the 12 country pairs posted growth when comparing data from this October with the same week last year. The link between Qatar and Saudi Arabia is the fastest growing country pair, having increased by 25% or 4,184 weekly seats in the last 12 months, mainly due to Qatar Airways adding its seventh destination in Saudi Arabia on 15 May, with for weekly flights to Hofuf from Doha. On the other hand, operations within the Iranian domestic market noted the greatest capacity decrease (-35%), followed by the UAE to Iran (-23%) and the UAE to Saudi Arabia (-12%).

Dubai is by far the most popular origin destination for services within the Middle East, being present in seven of the top 12 route pairs, which is perhaps unsurprising considering the fact that the UAE is featured in seven of the top dozen country pairs as well. The top 12 city pairs represent close to 17% of the total market, which has slightly increased from the 16% recorded for the same week last year. The 452-kilometre sector from Bahrain to Abu Dhabi, which grew by 1.3%, is a new entrant into this year’s ranking, due in part to Rotana Jet adding six weekly services using its ERJ 145s. Nevertheless the entry of Bahrain-Abu Dhabi into this year’s top dozen has also come as a result of operations between Tehran and Mashhad (ranking 12th last year) having decreased by 48%. 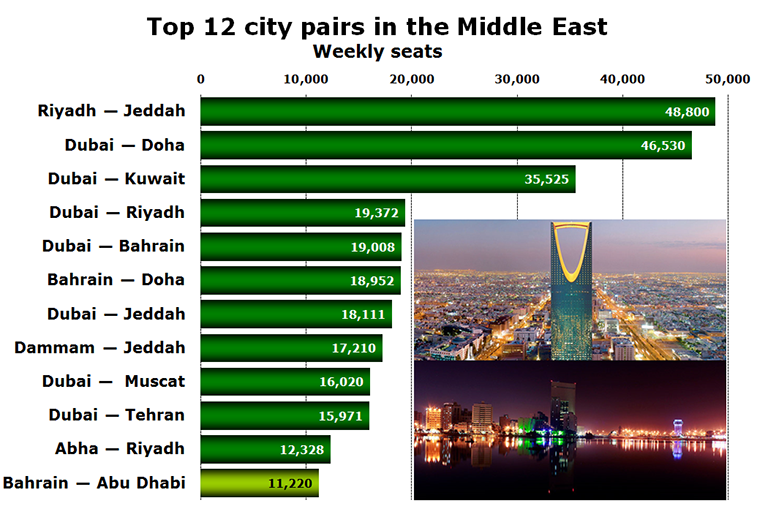 The 856-kilometre domestic sector between Riyadh and Jeddah (served by Saudia and flynas with a combined 218 weekly flights) still accounts for the majority of weekly departing seats this October, as it has witnessed its operations growing by 11% over the past 12 months. However, city pair #2, Dubai-Doha, managed to reduce the gap, as weekly seat capacity has increased by 12% this month. By comparison, three of the top dozen airport pairs noted capacity loss, with services between Dubai and the capital of Saudi Arabia having experienced the greatest capacity decrease (-23% or 5,836 fewer weekly seats). Both Emirates and flydubai have decreased their frequencies from four times daily to twice-daily and daily respectively since last October.