Bangkok, Ryanair and China are leaders in winter 2014; global seat capacity up 4.7% this November Bangkok’s “old” Don Mueang Airport is the fastest-growing in the world this winter as measured by additional weekly seats compared with last winter. Helping the airport achieve this, have been route launches during the last 12 months from Thai AirAsia X, Nok Air and Thai AirAsia.

With the Northern Winter season (W14) having commenced on Sunday 26 October, anna.aero this week takes a detailed look at which airports, airlines and countries have seen the biggest year-on-year change in available seat capacity (in absolute terms not percentage terms) at the start of the winter season, compared with the same period a year ago. Airlines are constantly adjusting their planned capacity so this analysis is really only a snapshot, and a similar analysis done for the first week of December or January would produce different figures, though the rankings are likely to be broadly similar.

The decision of the Thai authorities to allow the controlled redevelopment of Bangkok’s old Don Mueang airport has resulted in that airport seeing the biggest volume increase in seat capacity this winter. Over 90,000 more weekly seats will be departing the downtown airport this November than a year ago, representing a 44% increase in weekly capacity. Eight of the top 10 fastest-growing airports by this measure are in Asia, with the notable exceptions being Dubai and Istanbul Atatürk, home to two of the world’s biggest global carriers Emirates and Turkish Airlines respectively. With the exception of Bangkok Don Mueang, none of the other airports are growing by more than 20% in percentage terms.

Bogota, ranked 11th, is the fastest-growing airport in the Americas, while Rome Fiumicino in 12th place is the fastest-growing European airport thanks to the rapid expansion of both Ryanair and Vueling at the airport during the course of the year. Doha, in 13th place, is growing faster than Dubai in percentage terms, but is still not growing its seat capacity in volume terms as rapidly as its Middle East rival. 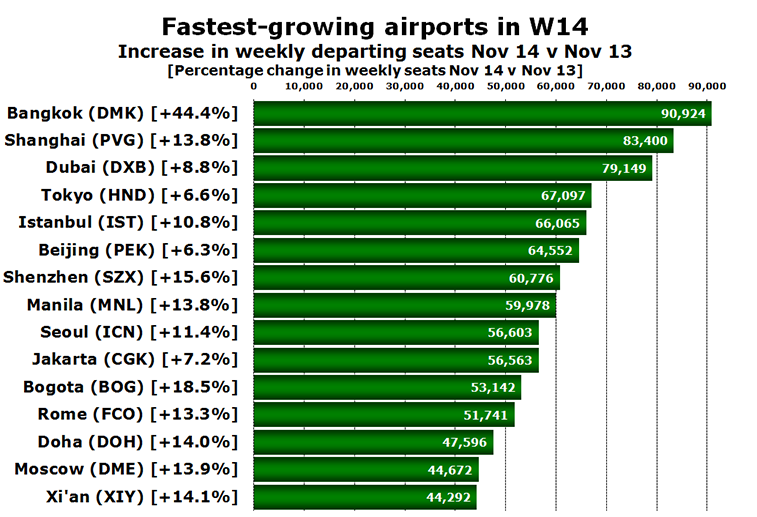 Helping Dubai to be the world’s third fastest-growing airport (and #1 outside of Asia) in terms of additional weekly seats, are route launches in 2014 by Emirates to Chicago, Oslo and Boston. During the last year, Dubai overtook London Heathrow to be the world’s #1 airport as measured by ASKs (Available Seat Kilometres).

At the other end of this ranking are the airports with the biggest decrease in weekly seat capacity. Bangkok Suvarnabhumi has seen a reduction of almost 60,000 weekly seats, almost twice as many as its nearest rival, Tripoli. However, Suvarnabhumi’s capacity reduction is only 8.5%, whereas in Tripoli the changes represent a 78% reduction in seats. Also among the airports with a weekly reduction of between 10,000 and 25,000 departing seats, are some major Asian-Australian airports; Brisbane, Seoul Gimpo, Singapore, Sydney and Tokyo Narita.

A similar analysis of airlines reveals which carriers have added the most weekly seat capacity at the beginning of the winter season, compared with the same period one year ago. Here we see a mixture of organic growth and artificial growth. Southwest Airlines continues to absorb and re-allocate operations from its AirTran Airways subsidiary resulting in an almost 9% increase in Southwest (“WN”) flown seat capacity, representing some 270,000 weekly seats. Avianca is close behind. The close to 70% growth can be attributed to the almost complete phasing out of flights operated under TACA’s “TA” code, nearly all of which now come under Avianca’s “AV” code. Aeroflot, in third place, has grown quickly as a result of taking over all Rossiya operations from St Petersburg, while sixth ranked germanwings has benefited massively from the decision by Lufthansa to hand over its non-hub operations from German regional airports to its in-house LCC. As a result the four fastest-shrinking airlines in terms of weekly seat capacity are AirTran, Lufthansa, TACA and Rossiya. 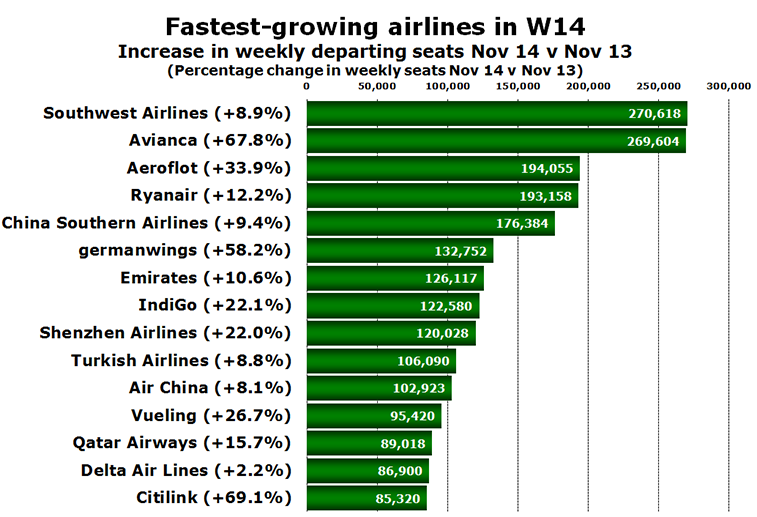 In terms of organic growth the fastest-growing airlines are Ryanair and China Southern Airlines. Ryanair is celebrating the start of the winter season with the launch of three new bases (Cologne Bonn, Glasgow and Warsaw Modlin) and the introduction of over 40 new airport pairs. Emirates is still adding more weekly seat capacity than its regional rival Qatar Airways, helped by the launch of a new Budapest service this week. Apart from China Southern, two other Chinese airlines make the top 15 with Shenzhen Airlines and Air China, both offering over 100,000 more weekly seats this November than last year.

Delta Air Lines, the world’s largest by weekly seat capacity (ahead of Southwest Airlines, United Airlines and American Airlines) only reports a modest 2.2% increase in seat capacity this winter. However, that still equates to almost 87,000 additional weekly seats, enabling it to just make it into the top 15 at #14. 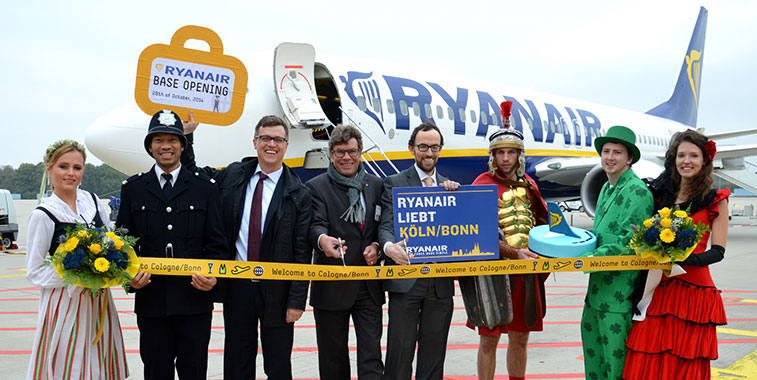 Ryanair had a fairly quiet summer by its standards with regard to route/base launches, but the start of the winter season sees the ULCC launch not one, not two, but three new bases. One of these is Cologne Bonn in Germany, where it will base one aircraft and operate a total of eight routes, of which five (Dublin, London Stansted, Madrid, Riga and Rome Ciampino) are new. Alicante and Barcelona services will be added at the end of March 2015.

In case anyone was in any doubt about where civil air transport was growing fastest, the analysis by country market makes it clear. Airports across China have seen the addition of almost three times as many more seats compared to last November, as at airports across the US. While the US is still the bigger market overall, its winter growth is just 2.0% while China is maintaining double-digit growth. All other country markets are a long way behind the US and China with Indonesia just beating Turkey and Japan for third place. Japan, Brazil and India, all make the top 15 in terms of seat volume growth despite percentage growth of less than 5%. Colombia (+13.8%), Saudi Arabia (+13.6%) and the Philippines (+10.1%) all achieve their volume growth thanks to double-digit percentage growth in seat capacity. 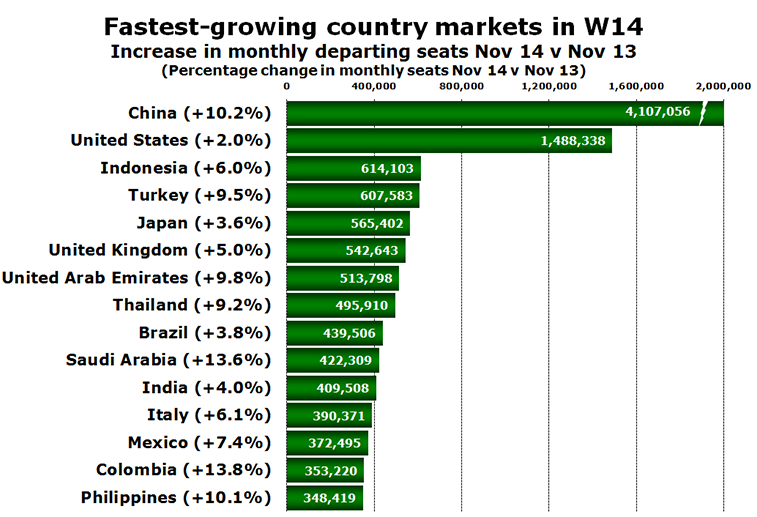 Overall, global seat capacity in November is up 4.7% though the number of flights has increased by just 2.1% confirming a trend globally towards the use of larger aircraft. In terms of ASKs (Available Seat Kilometres), which takes into account sector length, capacity is up 5.8%, indicating an increase in average sector length from 1,724 kilometres to 1,742 kilometres. 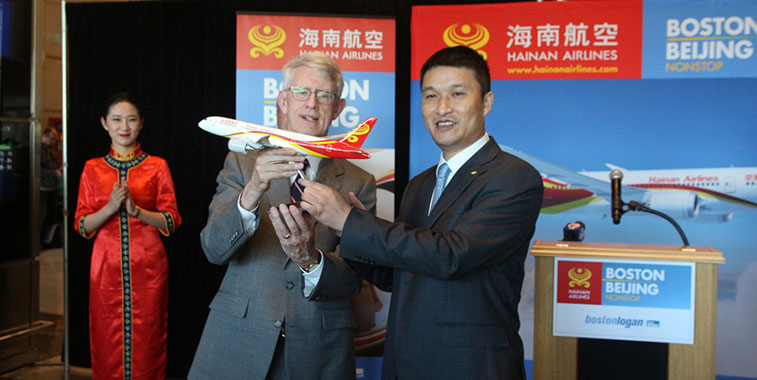 Increasing seat capacity between China and the US (the two fastest-growing country markets in volume terms) is Hainan Airlines, which launched four times weekly flights between Beijing and Boston on 20 June, using its new 787-8s. Last November, seat capacity at China’s airports was 54% of that at US airports; this November that figure has risen to 58%. If that trend were to continue, China’s air travel market would overtake that of the US in around 2025.