Three flags for three new routes from Brussels Charleroi – Riga, Prague and Bucharest. Jean-Jacques Cloquet, BSCA CEO said: “The number of departures available from Charleroi to Eastern Europe has been boosted by these three new Ryanair lines. The launch of these routes as part of the winter development plan means that we can now offer flights to colourful cities that are packed with history at great prices from an airport that is quick and easy to use, as well as being accessible.” Cutting the cake which was baked to celebrate five new routes for W14/15 from Ryanair’s Madrid base (including one this week to Warsaw Modlin), along with the crew are: (third from the left) Victoria Baños, Head of the Cabinet, Madrid Airport; and (on her right) Sandra Rubio, Sales & Marketing Executive Spain & Portugal, Ryanair. 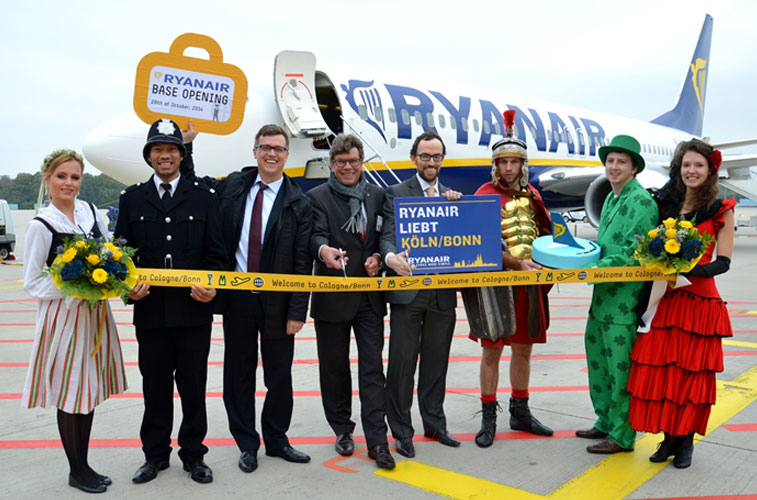 Ryanair is opening three bases in W14 one being at Cologne Bonn (the others are at Glasgow and Warsaw Modlin). In charge of the celebrations in Germany, along with appropriately destination-themed guests were: Jan Möller, Head of Business Development, Cologne Bonn Airport; Ulrich Stiller, Director Marketing and Sales, Cologne Bonn Airport; and Colm O’Shea, Sales & Marketing Manager ‒ Germany, Netherlands, Austria and Switzerland, Ryanair.