Turkish Airlines just loves adding new destinations to its route network from Istanbul Atatürk. More than 20 have been added in the last 12 months including Asmara, Bordeaux, Boston, Montreal, Pisa and Varna. As a result, the busiest airport in Turkey has increased its route network by more (24 new destinations) than any other airport in the world.

Last week, anna.aero revealed which airlines, airports and country markets were seeing the biggest volume increase in seat capacity this November compared with last November. This week, we split the world into four geographic regions (Asia, Europe, North America and Rest of World) and analyse the available schedule data to determine which airports in each region have seen the biggest net increase in destinations served this November compared with last November. It should be remembered that this is just a snapshot, and that a similar analysis for any other of the winter months would probably produce different results. In addition, some of the results, as will be seen, are influenced by data availability issues.

There is a dominant winner in the European section of this analysis. Istanbul’s Atatürk airport has seen a net gain of 24 new destinations compared to the beginning of last winter. The reason for this is pretty obvious. Turkish Airlines continues to expand its global reach into more and more airports and in the last 12 months has added 25 non-stop destinations to its network, while dropping just five (Donetsk and Simferopol in Ukraine, Benghazi and Tripoli in Libya and Mosul in Iraq). In addition, other new destinations were started by the likes of Atlasjet (to London Luton and Nizhnekamsk) and Scat Airlines to Shymkent. 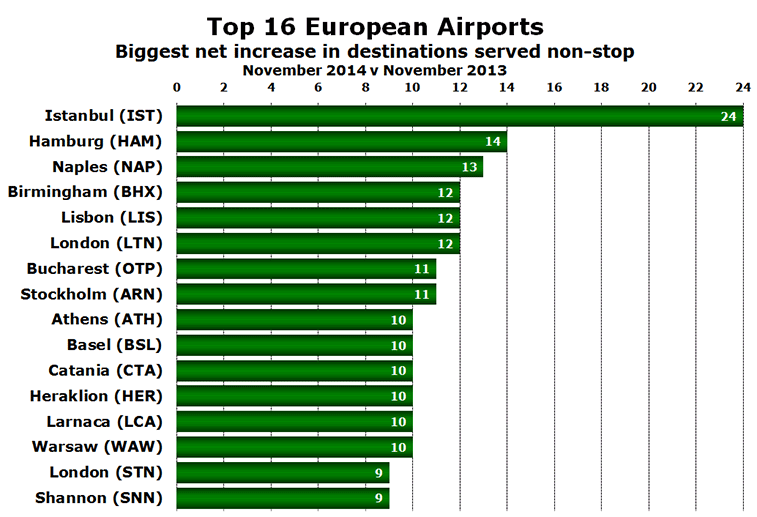 Best of the rest are Hamburg and Naples, with a net increase of 14 and 13 destinations respectively. Coincidentally, or not, both airports became easyJet bases at the start of the summer 2014 season. In Hamburg, while easyJet and local LCC rival germanwings were both responsible for adding four new destinations, other carriers such as British Airways, Czech Airlines, Condor, Germania and even Ryanair helped in adding to the northern German airport’s connectivity.

In Naples, easyJet has added three new routes to the airport’s winter network (Brussels, Hamburg and London Luton), but has been beaten by Meridiana, which has added Athens, Bologna, Genoa, Madrid and Moscow Domodedovo. Again, the presence of Lufthansa’s LCC germanwings is felt with new routes to Düsseldorf and Hannover. 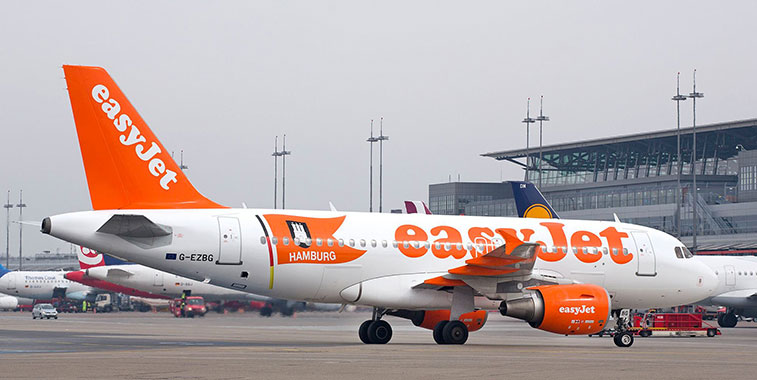 easyJet may have made Hamburg a base at the start of the summer season, but the airport’s network growth this winter owes as much to Lufthansa’s in-house LCC germanwings as it does to the Luton-headquartered carrier. Both airlines are responsible for four new routes at the northern German airport this winter.

In North America (which includes Mexico), the abolition of the Wright Amendment has given Dallas Love Field passengers access to many more domestic destinations. Southwest Airlines, with its corporate headquarters at the airport has taken full advantage and broadened its network considerably in the last two weeks. Finally the Wright Amendment is history and Southwest Airlines can expand its route network from the airport it calls home. Dallas Love Field traffic is likely to grow significantly now that the airline can operate to some of its more distant hubs.

Nearby Dallas/Fort Worth has not suffered it would seem as that airport has seen a net increase of nine destinations, the result of gaining 16 new destinations and losing seven. The majority of the new destinations have been started by a newly-invigorated American Airlines. International destinations such as Bogota, Edmonton, Hong Kong and Shanghai, have been complemented by new domestic services to smaller airports such as Bismarck and Meridian. 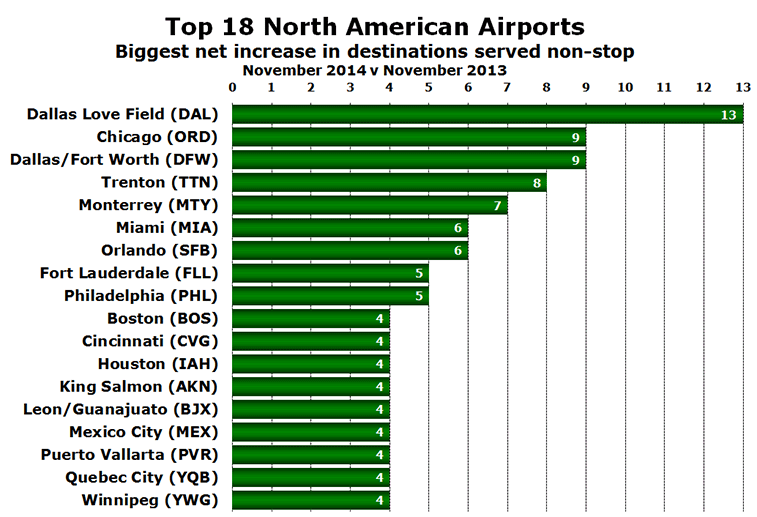 Trenton-Mercer Airport in New Jersey owes its position to Frontier Airlines which is the only scheduled operator at the airport, and has launched domestic service to nine destinations (all with either three or four weekly flights this winter) while dropping one. American Airlines has grown its international network from Dallas/Fort Worth significantly during the last 12 months. Non-stop flights to Hong Kong began on 11 June

In Asia, not surprisingly, China’s airports dominate the rankings claiming 10 of the top 12 positions. The only non-Chinese airports in the leading group are Jeju in South Korea, and Bangkok Don Mueang, which, as revealed last week has benefitted from being allowed to claim back some of the traffic demand that was originally obliged to use the new Bangkok Suvarnabhumi airport. Shanghai Pudong’s network growth means it now serves 166 destinations non-stop, second only in Asia to Beijing, which connects non-stop to 215 other airports. In all, 13 Asian airports serve at least 100 destinations non-stop with all those airports seeing a net increase in the last 12 months with the exception of Bangkok Suvarnabhumi. 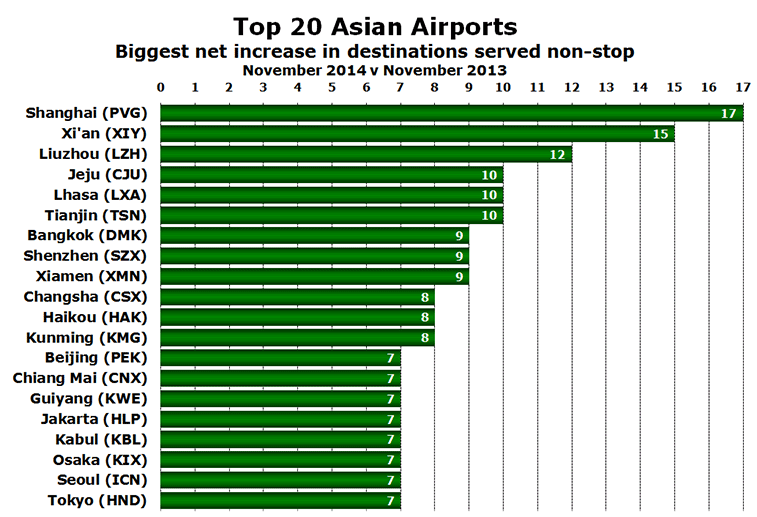 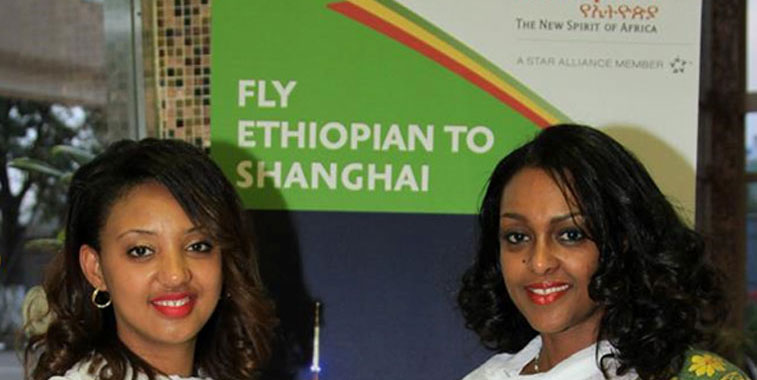 Ethiopian Airlines became the first carrier to link Shanghai Pudong with Addis Ababa when it began daily flights between the two airports at the end of March. At 8,839 kilometres, it is Shanghai Pudong’s second longest new route in the last 12 months, after American Airlines’ new service to Dallas/Fort Worth (11,830 kilometres).

Further analysis of the world’s remaining airports suggested that several of Tunisia’s airports had seen major growth in their networks. However, on closer inspection this can be attributed to local carrier Nouvelair Tunisie, which serves many destinations in Europe, not having supplied schedule data prior to March of this year. However, two airports of note appear to have had genuine double-digit growth in destinations served. Algiers significantly increased its network thanks to Air Algerie’s network expansion, while Doha continues to benefit from Qatar Airways’ global ambitions.