Airline revenue management for beginners Lesson I: Christmas is a good time to make money from desperate parents 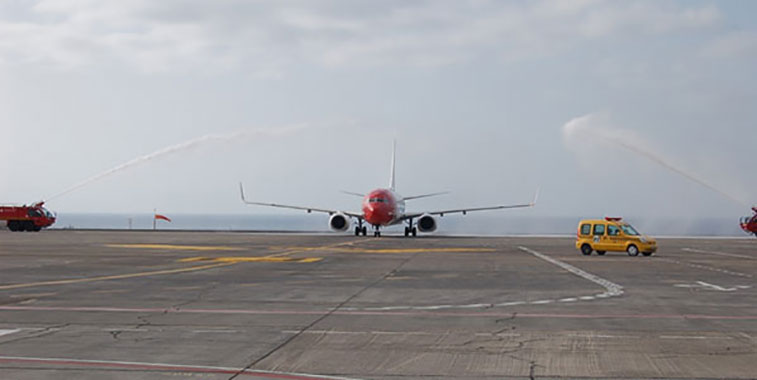 You can see the appeal. When Norwegian launched flights between London Gatwick and Tenerife South in September 2013 the weather on the Canary Island was lovely and warm. Which it still is in December, when northern Europeans (especially Brits) get obsessed about seeking out some winter sun. But how do Norwegian’s fares compare with those of Europe’s two largest LCCs (Ryanair and easyJet) on flights between London and Tenerife South this December/New Year? We reveal all!

During 2014 there have been a number of news stories in the UK press about parents taking their children out of school during term-time to take family holidays, thus avoiding the price rises associated with school holidays on family-friendly leisure routes. This is basically illegal, but that does not stop people doing it, and probably getting away with it most of the time. However, there have been a number of high profile prosecutions to act as a warning and deterrent. With Christmas approaching and the UK weather getting colder and wetter, and the evenings getting dark from round 16:30, we thought it time to revive anna.aero’s much-missed ‘Farewatch’ feature.

Our data-hungry Chief Analyst wanted to see if there was a chance of a few days of sunshine for himself, his wife and his nine-year-old water-loving son before Christmas. Having noticed that Norwegian (an airline he has never flown with) operates from London Gatwick to Tenerife South daily (except Wednesday) the airline’s “Fare calendar” feature was examined. The basic ‘Low Fare’ price was noted for each day in December and the first week of January. This price does not include checked baggage, seat reservation or Fast Track at the airport. 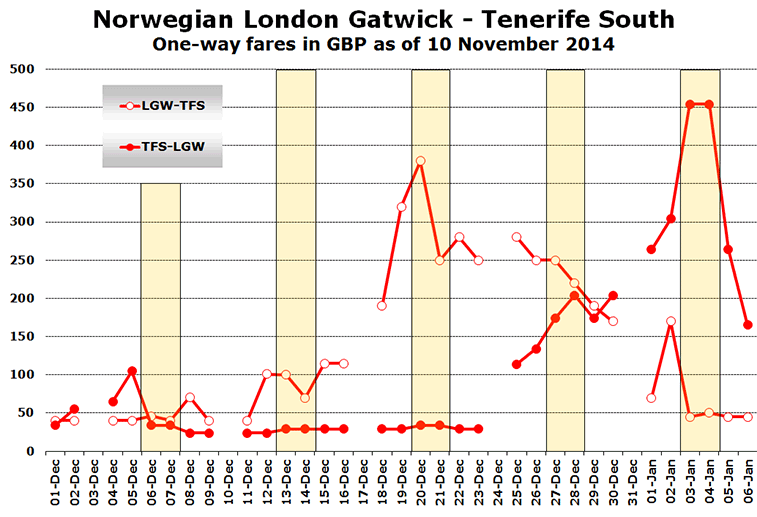 Source: Norwegian.com website as of 10 November 2014. Shaded days are Saturdays and Sundays.

In early December outbound flights for under £50 are still possible, with return flights even available for just £25. Fantastic! So long as you don’t have children. State schools break up for Christmas on Friday 19 December, with many fee-paying schools finishing a week earlier. The 06:00 outbound flight on Saturday 20 December is already over £350, but then gradually drop away again until by Saturday 3 January they are once again below £50.

Return flights remain at under £50 until after Christmas, but then rise rapidly, currently peaking at just over £450 during the weekend just before children return to school in the new year.

Ryanair offers a daily service from London Stansted to Tenerife South, departing the Essex airport at 06:15 each day. The same pattern can clearly be seen, though fares are on the whole lower. However, even Ryanair’s basic fare (no checked baggage etc) includes a £400 one-way fare coming back on Saturday 3 January. 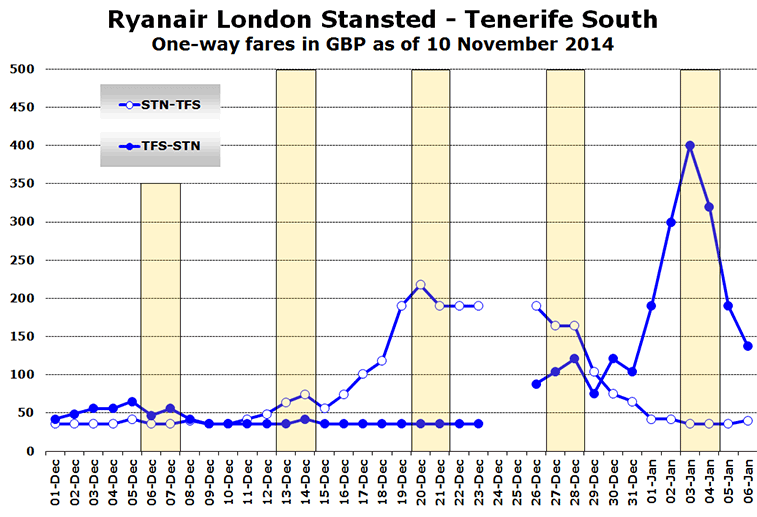 Source: Ryanair.com website as of 10 November 2014. Shaded days are Saturdays and Sundays.

easyJet operates two daily flights from its London Gatwick base to Tenerife South. For the purposes of this analysis only the cheapest flight each day is recorded, as displayed in the airline’s own ‘three-week view’ fare calendar. The similarity with the Ryanair profile comes as no great surprise, with the highest one-way fare again on Saturday 3 January at £418. 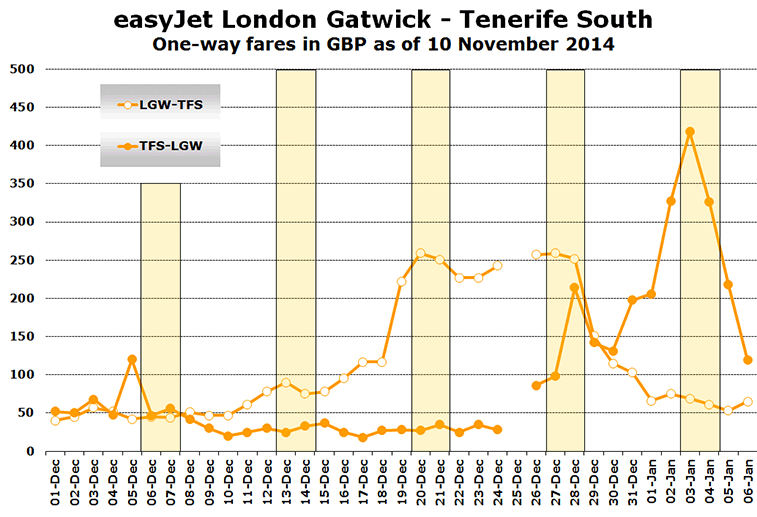 Source: easyJet.com website as of 10 November 2014. Shaded days are Saturdays and Sundays.

Doing a simple mathematical average of all the fares shown in these graphs for each airline reveals the ranking of the airlines in terms of fares. The values themselves are fairly meaningless but they do show, as might be expected, that Ryanair is cheapest, followed by easyJet and finally Norwegian.

It would be interesting to repeat this exercise in four weeks’ time and see how the prices for the key days of the week have changed, or if some airlines will sell all their seats on the flight well before the flight departs. Will it be possible to pay £1,000 for a ‘basic’ return fare with an LCC this Christmas?