ASKs between Europe and Caribbean increase by 5.3%; Seats slightly ahead on 6.4% growth 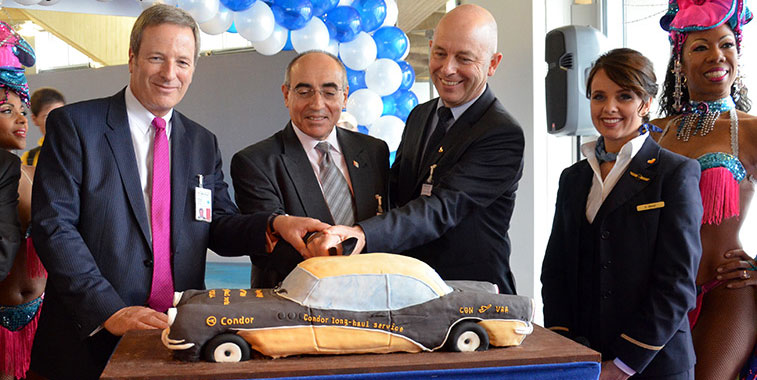 ASK growth of 11%, including the start of its weekly Cologne Bonn to Varadero service on 4 November, has allowed Condor to maintain and evenly slightly improve its position over British Airways in the particular metric. The oneworld carrier’s own ASK growth of 7.4% was not enough to see it steal second spot from the German leisure airline.

Dark nights, grey skies and cold winds. In Northern Europe, they’re here to stay until March brings some warmth and respite. In the Caribbean, conditions couldn’t be more different – in Point-a-Pitre (the Caribbean end of the most popular city pair in this analysis) it has scattered clouds today and it’s a pleasant 27C/81F. You can certainly understand the appeal. It is the lure of these conditions which has perhaps encouraged airlines flying between Europe and the Caribbean to increase year-on-year weekly ASKs by 5.3%, weekly flights by 6.4% and weekly seats by 5.2%. This analysis excludes charter flights and considers direct flights only. However, it should be noted many Caribbean services are flown one-stop, but these have been excluded from this analysis for simplicity.

UK claims one-third of the top 12

Not only does the UK claim the #1 spot in the top 12 country pairs, but it leads the rest of Europe in terms of its presence in this market, with four out of the 12 most prominent country pairs. The UK-Barbados’ pole position was due in no small part to its 19% growth over the previous year, while France to Guadeloupe has declined by 6.9%.  Four country pair markets have been lost in the last 12 months (Belgium-Cuba, Denmark-US Virgin Islands, Germany-Barbados and Russia-Jamaica), while just two have been added (Spain-US Puerto Rico and Germany-Grenada and South Grenadines): 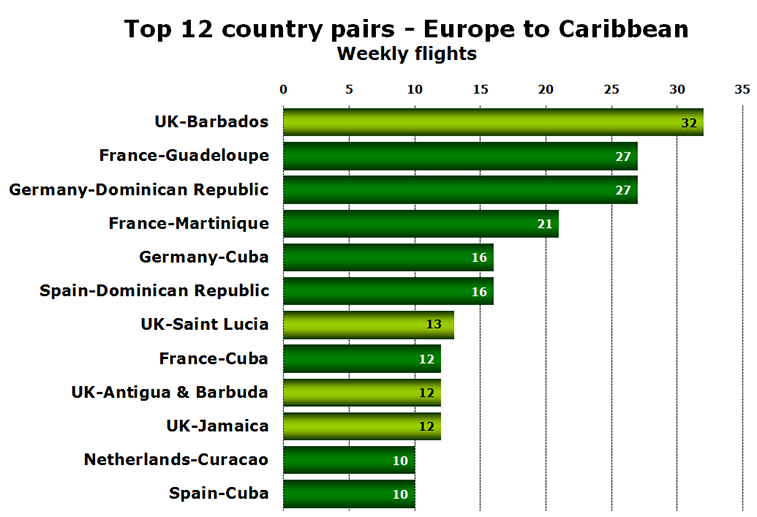 In the week commencing 1 December 2013, the top 12 country pairs commanded 65% of total weekly flights, and this has remained unchanged in the same week this year. The fastest growing country pair was the Spain to Dominican Republic market – which notched up a 60% annual increase thanks to: Iberia adding five times weekly services between Madrid and Santo Domingo; Evelop Airlines starting weekly services between Madrid and Punta Cana; and Air Europa increasing its Madrid to Punta Cana from weekly to twice-weekly, although it has stopped its services from the Spanish capital to La Romana in the last 12 months. Along with the France to Guadeloupe market pair, the only other shrinking country duo also involves France, this time to Martinique, which posted an 8.7% annual reduction.

As a result of its 5.2% annual growth, the Europe-Caribbean market inched closer to providing 100,000 weekly seats, growing from 93,802 to 98,726 in 2014. The approach towards this landmark volume has come despite the top two city pairs posting 7% and 11% annual capacity reductions respectively. Joining these routes in the black column is the #10 city pair between London Gatwick and St. Lucia. Its 6.9% capacity reduction has seen it slip from the sixth spot it achieved last year. 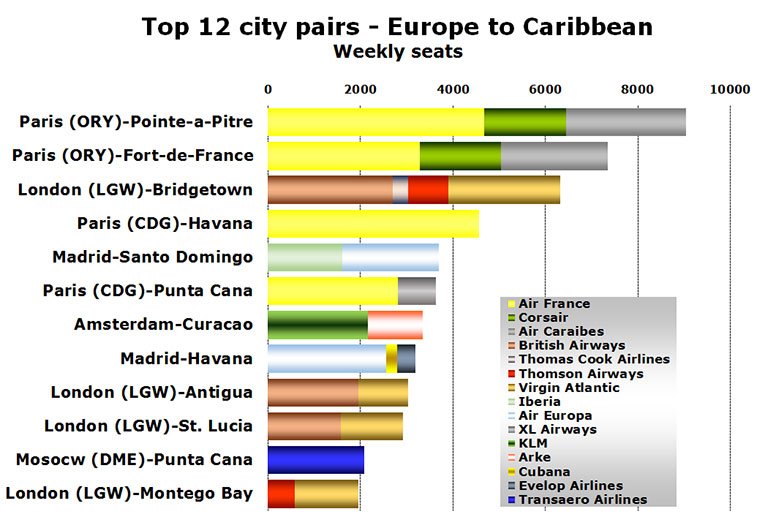 There are three routes within the top 12 which have posted a discernible annual growth over and above that achieved elsewhere. Leading this trio of city pairs, with a 73% hike in weekly seats versus the same week last year, is the Madrid to Santo Domingo route – for the capacity increase reasons documented earlier. A considerable way behind, but still offering some very respectable growth figures are the city pairs of London Gatwick to Montego Bay (+33%) and Moscow Domodedovo to Punta Cana (+24%). The former’s growth has seen it force its way inside the top 12 from its previous ranking of 18th, while the Russian route to the Dominican Republic has improved its standing by one place. The city pair casualty in this rankings shift is the Moscow Sheremetyevo to Punta Cana service, which has not only fallen from 11th place last year, but has disappeared altogether in this analysis. Some of this capacity appears to have been shifted to another airport pair in Moscow – with Vnukovo to Punta Cana appearing in the listing in 2014, whereas it was not present in the 2013 figures.

Spanish airlines in, Italian out

In the past 12 months, the number of airlines serving the Europe to Caribbean market has increased by one, with Spain’s Iberia and Evelop Airlines, joining the other 22 airlines present in this sector, while Air Italy (which now operates flights just for its parent Meridiana) has ceased operations between these two regions. The paucity of airlines coming from the Caribbean-end of the market is very evident – with just one, Air Caraibes (highlighted in light green), inside the top 12 airlines in terms of weekly ASKs, alongside just two others – Cubana and Caribbean Airlines – further down the rankings. 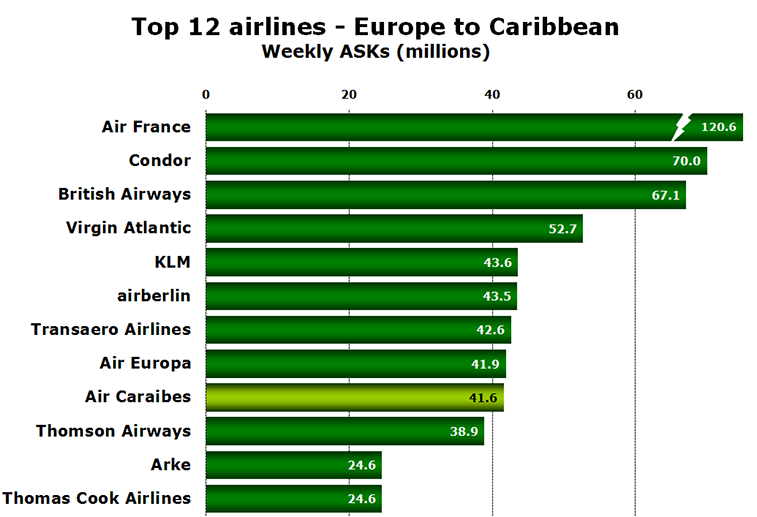 Three airlines within the top 12 have posted capacity declines in the last year, with the #1 airline Air France delivering the most significant ASK reduction (-6.3%), followed by Arke (-4.9%) and Air Caraibes (-2.6%). Despite 8% and 1% growth in ASKs on Paris CDG to Punta Cana and Havana routes respectively, the main reason for this 6.3% fall is the fact that the SkyTeam airline has cut its ASKs on its Paris Orly to Pointe-a-Pitre operation by nearly 16% year-on-year, with its Fort-de-France operations from the Parisian airport also being trimmed by around 2%. The tussle for second spot in this inter-regional market has continued, with Condor’s 11% annual growth marginally increasing the gap between itself and British Airways in third, which mustered a 7.4% ASK yearly increment. In terms of the airlines increasing their respective ASKs in the Europe to Caribbean market by the biggest margin, the growth leaders are Thomas Cook Airlines (+57%), airberlin (+32%) and Thomson Airways (+29.3%). As a result, Thomas Cook replaces French carrier Corsair inside the top 12.