Boeing stays in lead over Airbus as it delivers 61 units in October, SriLankan Airlines receives its first A330-300 On 31 October, SriLankan Airlines took delivery of its first A330-300 becoming a new operator for the type. This has joined the airline’s existing fleet of A320, A321, A330-200 and A340-300 units. Commenting on the achievement, Kapila Chandrasena, CEO, SriLankan, said: “We have a reputation as a global leader in service, comfort, safety, reliability and punctuality; all of which are qualities reflected in selecting the A330. The addition of this A330-300 to our family will enable us to drive our offering to new heights.”

After the strongest September since anna.aero began collating delivery data, both Airbus and Boeing delivered fewer aircraft this October. Besides the fact that the American manufacturer maintains its leading position over Airbus in terms of aircraft delivered in the 10th month of the year, Boeing continues to lead the 2014 delivery race by 96 units (up from 85 in September). When compared to the first 10 months of 2013, the two producers managed to increase their combined deliveries by 48 units, with 1,082 aircraft incorporated by carriers into their respective fleets so far in 2014.

Having delivered more than 100 aircraft each month since March, the two manufacturers have once again recorded an impressive score. The combined deliveries of both producers for the 10th month of the year, was 111, of which 61 came from the American manufacturer, and 50 from its European counterpart. Noteworthy is the fact that Boeing enhanced its performance when compared to the same month last year, delivering seven more units, while Airbus handed over nine fewer airframes. Overall, 73% of all October deliveries were narrow-body aircraft, which is up 2.9% from last month’s figures. 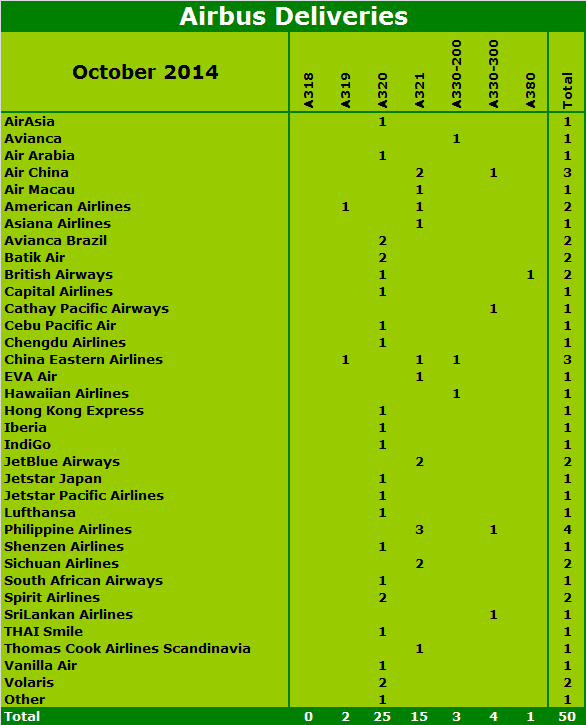 Airbus closed October with a total of 50 units delivered, which constitutes four fewer airframes than the amount delivered in September 2014 and nine fewer than in the corresponding month last year. Over the 10 completed months of 2014, the European manufacturer handed over 493 units, representing a decrease of 2.2% (11 fewer units) on the same period last year.

Once again, single-aisle deliveries in October were led by the A320 (25 units), with 42 narrow-body aircraft provided to carriers around the world. The flag carrier of the Philippines, Philippine Airlines, was the only operator to receive more than two narrow-body units from Airbus, as it incorporated three A321s into its fleet. In addition, a total of nine airlines saw two Airbus single-aisle aircraft join their respective fleets in October, namely Air China, American Airlines, Avianca Brazil, Batik Air, China Eastern Airlines, JetBlue Airways, Sichuan Airlines, Spirit Airlines and Volaris.

Analysis of the wide-body deliveries reveals that Airbus handed over eight airframes in October, accounting for four fewer units than in both the preceding month and the corresponding month of 2013. Following September’s delivery of four A380s, the European producer handed over just one unit of the type in the 10th month of 2014, to British Airways, which now operates a fleet of eight A380s. In addition, a total of four A330-300s were delivered in October, one each to Air China, Cathay Pacific Airways, Philippine Airlines and SriLankan Airlines, with the latter having received its first unit of the type on 29 October. 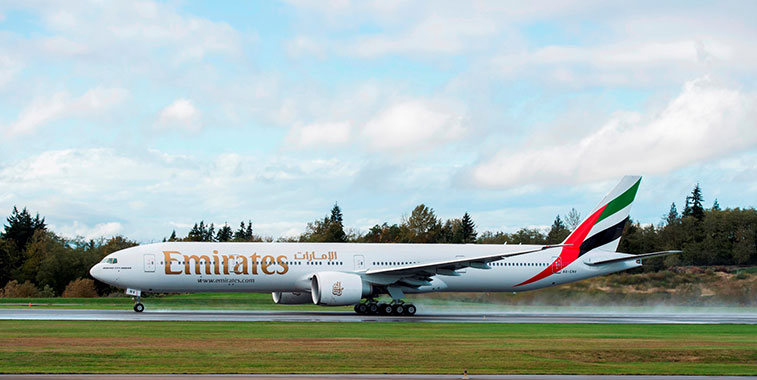 On 29 October, Boeing and Emirates celebrated the delivery of the airline’s 100th 777-300, marking another milestone in a partnership that began over two decades ago when the Dubai-based airline ordered its first 777. Following this delivery, Emirates now has 142 777s in operation and is the only airline in the world to operate all the 777 variants. 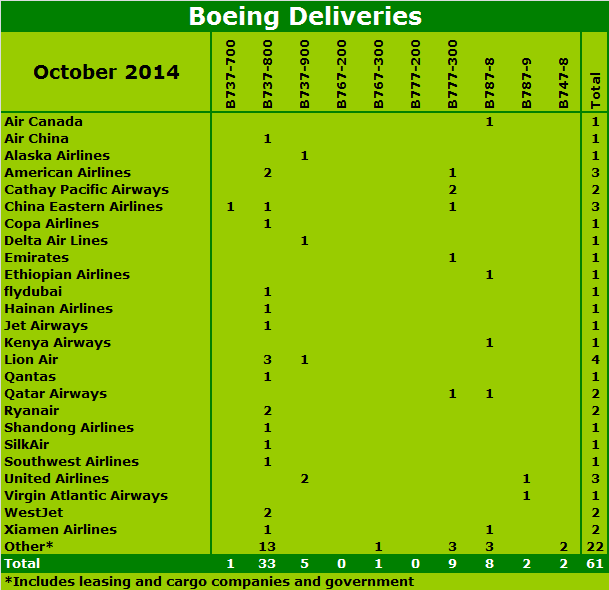 An impressive 22 wide-body airframes were handed over by the American manufacturer in October 2014, one fewer unit than in September. In addition, Boeing bettered its year-on-year performance, delivering two more wide-body units than the 20 it managed in the corresponding month of 2013. Following 13 and seven 787-8s delivered to carriers in August and September respectively, Boeing delivered a total of eight units of the type reaching customers in October. Besides this, United and Virgin Atlantic Airways received one 787-9 each.