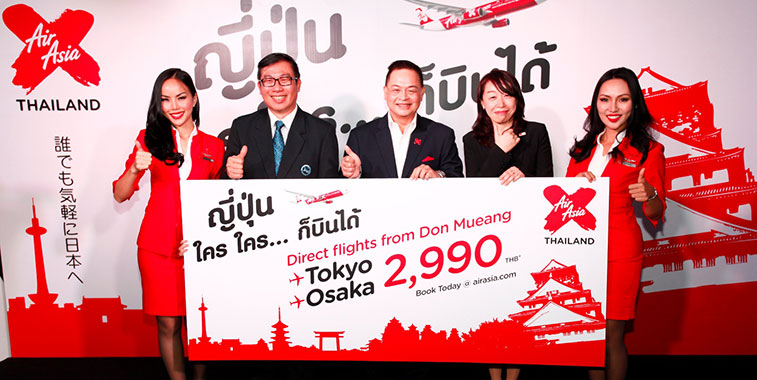 A couple of months ago Osaka’s Kansai International Airport (KIX) reached a major milestone, its 20th anniversary. Commercial services launched from the man-made island facility on 4 September 1994 and according to the airport, in its first 20 years the airport has handled 339.35 million passengers, of which 123.61 million were on domestic flights. Aircraft movements have totalled 2,331,023 during this period. Passenger numbers have fluctuated over the last 20 years from a peak of 20.7 million in 2000 to a low of just 13.5 million in 2009. When anna.aero last examined Kansai International Airport in November 2009 there were signs that traffic numbers were starting to pick up. This has been especially true in the last couple of years when passenger demand has grown from 13.9 million in FY2011 to 18.1 million in FY2013 (which ended on 31 March 2014). 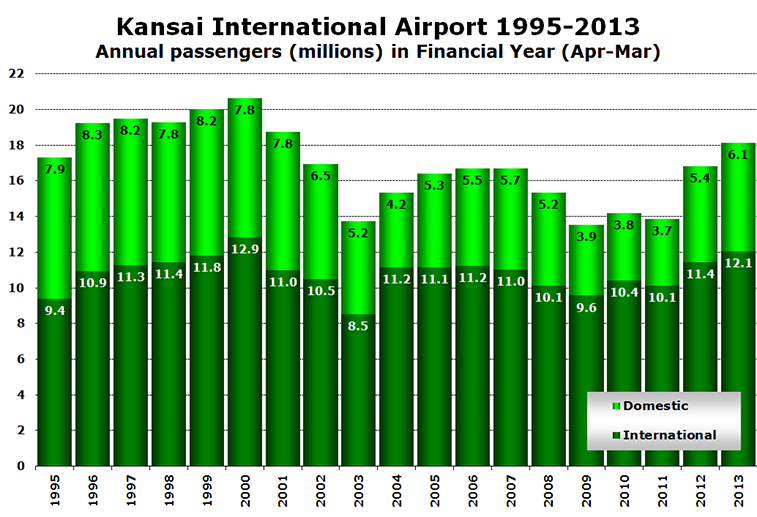 According to the airport’s latest statistical press release, it has reported year-on-year growth in each of the last 35 months. In August KIX handled 1.87 million passengers, its highest monthly throughput in 13 years. The airport’s seasonality profile is relatively flat and scores an “Excellent” 0.88 on anna.aero’s SVID calculation based on data for 2013. This compares with a score of 1.32 (also “Excellent”) for its 2012 figures. 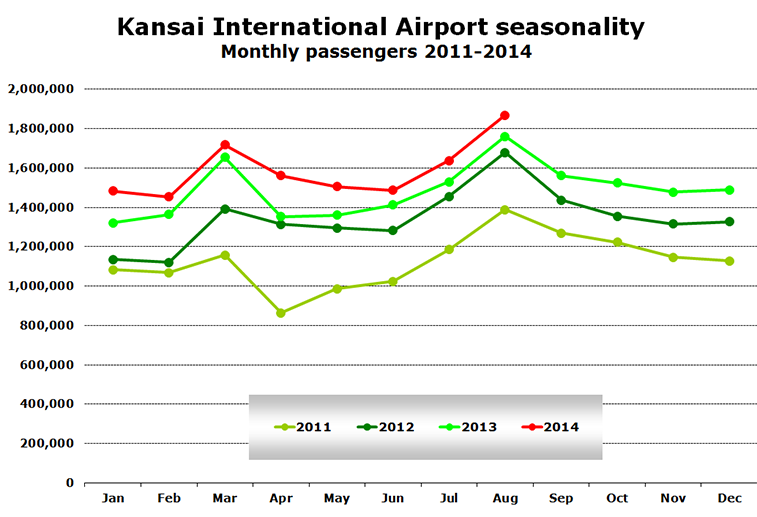 When anna.aero examined the airport in 2009 the two leading airlines, by some distance, were Japan Airlines (JAL) and All Nippon Airways (ANA). However, since then LCCs have emerged in the Japanese market and appear to be especially important to KIX. Peach Aviation (a joint venture including ANA) is now the airport’s leading airline in terms of weekly departures, with Jetstar Japan (a joint venture including JAL) in third place. During the last 12 months Peach has overtaken ANA, and Jetstar Japan has overtaken JAL, as the LCCs help drive traffic growth at the airport. 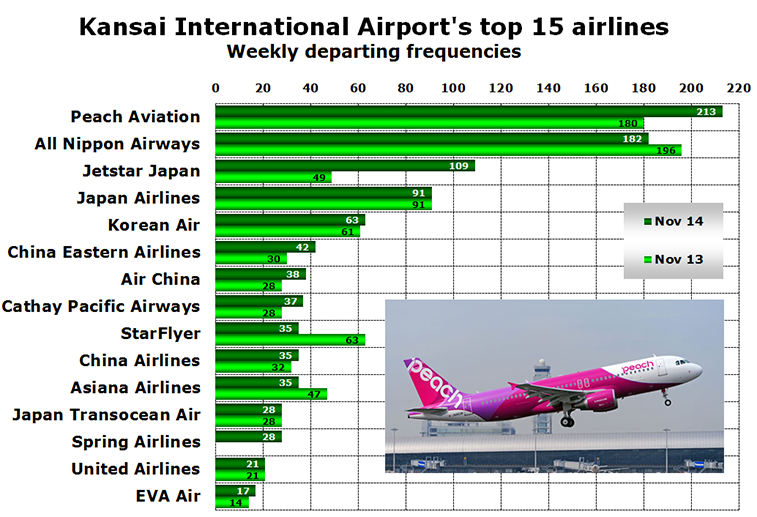 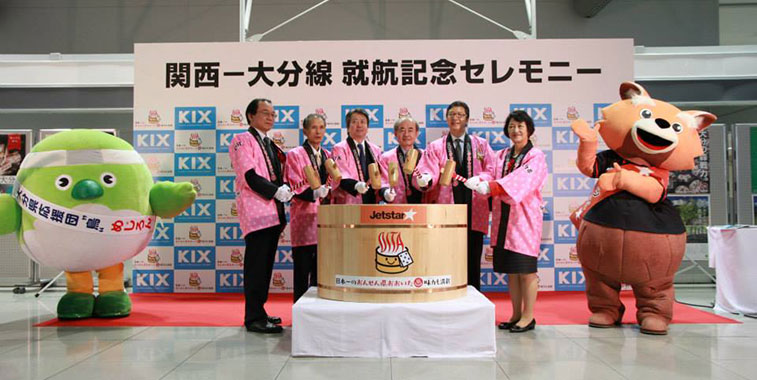 Mascot alert! On 9 October, Jetstar Japan launched a new daily service from Kansai International Airport to Oita, a sector of just 341 kilometres. This winter Jetstar Japan will operate 109 weekly departures from the airport, spread across six domestic destinations. Apart from Oita, the airline also added Kumamoto to its Kansai network with the introduction of twice-daily flights on 26 October.

Japanese carriers claim the first four places in terms of weekly flights at KIX, with Korean Air the first non-Japanese airline in fifth place. It serves Seoul Incheon, Seoul Gimpo, Jeju and Busan with daily flights. This November a total of 51 airlines are operating scheduled services at the airport. Carriers that have started services at the airport for the first time in the last 12 months include HK Express, Juneyao Airlines, Myanmar Airways International, Spring Airlines and Thai AirAsia X. Two of the MEB3 carriers (Emirates and Qatar Airways) serve Kansai, while European carriers are represented by Air France, Alitalia, Finnair, KLM, Lufthansa and Turkish Airlines. However, Alitalia’s Rome service appears set to end at the beginning of the summer 2015 season. Myanmar Airways International is one of five new airlines to start services to Kansai during the last 12 months. On 8 October the carrier began operating thrice-weekly flights on a Yangon-Kansai-Phnom Penh-Yangon routing. These are Kansai’s only links to Cambodia and Myanmar.

Network developments reported in the coming months include the resumption of Cebu Pacific Air’s services to Cebu, Japan Airlines to Los Angeles, and the introduction next May of non-stop service to Vancouver operated by Air Canada rouge.

While domestic routes account for around 34% of weekly seat capacity (there are many additional domestic routes from Osaka Itami Airport which is closer to downtown Osaka), international routes represent almost two-thirds of weekly seat capacity. During the last 12 months China has edged ahead of South Korea as the leading international country market, helped by new services from Air China, China Eastern Airlines, Juneyao Airlines and Spring Airlines. 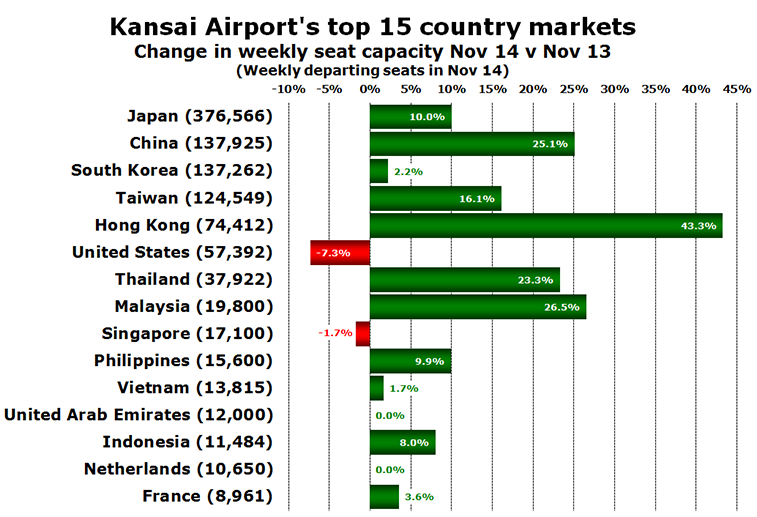 Hong Kong is the fastest-growing country market thanks primarily to the launch of twice-daily flights last November by Hong Kong Express Airlines (since rebranded as HK Express) and the decision by Cathay Pacific to launch an additional daily flight. The only new country markets that are now connected to KIX that were not connected last November are Cambodia and Myanmar. These are both served thanks to Myanmar Airways International’s new thrice-weekly service, which operates from Yangon to Kansai non-stop, and then returns to Yangon via a stop in Phnom Penh (Cambodia). 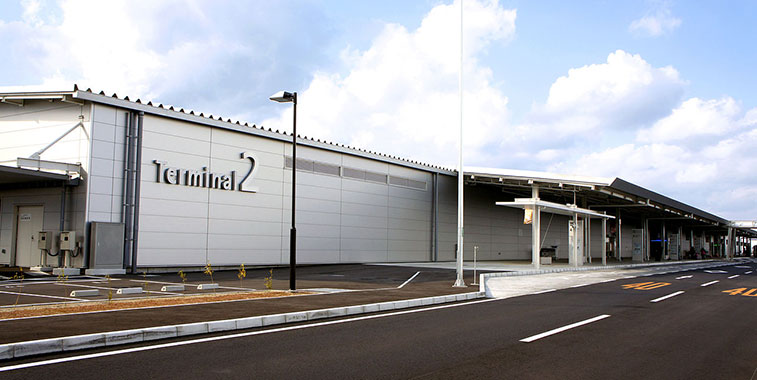 As easy as 1, 2, 3? Kansai International Airport opened a low-cost terminal (2) in October 2012. It is a single-storey building without air bridges and offers lower airport charges to its only user, Peach, which now operates more flights from the airport than any other carrier. All other LCCs at Kansai currently use the main Terminal 1 facility, though there are plans to build a another low-cost terminal (3) in the next few years which would cater for additional LCCs and would also be able to handle wide-body aircraft.