In typically flamboyant fashion Ryanair’s CEO Michael O’Leary uses an axe to cut the great cake that was prepared for last week’s announcement of Ryanair’s 71st base. Joining him are Anne-Marie Callan, Irish Ambassador to Slovakia and Ivan Trhlík, CEO and Chairman of the Board of Directors of Bratislava Airport. The ULCC will base two aircraft at Bratislava Airport next summer, but will add just one new route, Madrid, to its existing network of 15 routes.

Ryanair last week announced that it would be making Bratislava Airport its 71st base from the end of next March with two 737-800s being stationed in the Slovak capital. We certainly didn’t seen this one coming in our recent feature on potential Ryanair’s S15 bases, although we were pretty chuffed with guessing Copenhagen, the recently announced base #70, which came fourth on our list. This is good news for the Slovak airport which has seen its annual passenger numbers fall from a high of 2.22 million in 2008 (when local LCC SkyEurope was still operating) to 1.37 million in 2013. Ryanair first began serving Bratislava in October 2005 when services were launched from London Stansted and Milan Bergamo. Since then it has increased its activities at the airport considerably, though the number of annual operations peaked in 2010, before reducing slightly each year since. 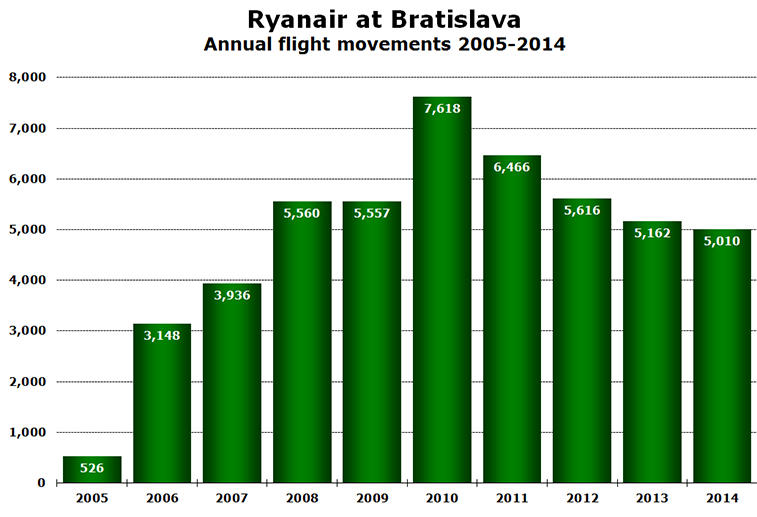 Next year’s new base will see the addition of just one new destination, Madrid, bringing to 27 the number of points across Europe that Ryanair has served from Bratislava, of which 16 will be operating next summer. The high churn rate of 41% (11/27) is not untypical for airports at which Ryanair operates. Among the 11 airports no longer served are three in Germany, three in Italy, two each in Spain and the UK, and Stockholm in Sweden. Madrid will be the first new destination offered by Ryanair from the airport since Gran Canaria services were introduced in 2011. Of the 16 destinations to be served next summer, six are summer-only, seasonal services (Edinburgh, Girona, Malaga, Palma de Mallorca, Paris Beauvais and Trapani).

Next summer Ryanair has stated that it will be operating 60 weekly departures from Bratislava spread across its 16 routes. This is an increase on the 52 operated this summer and the 56 operated in summer 2013, but still short of the 81 operated in the summer of 2010.

Ryanair dominates scheduled services at Bratislava, though Czech Airlines serves Kosice and Prague, and UTair offers flights to Moscow Vnukovo. However, from 6 December flydubai will be operating twice-weekly, low-cost flights to Dubai. A notable absentee from the airport is Wizz Air, which has only briefly served the airport in late 2009 with a service to Rome, which lasted less than four months.