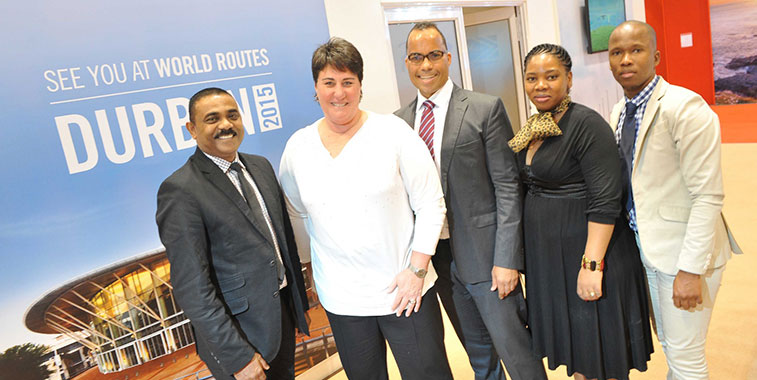 While it is home to an estimated population of 54 million people, South Africa covers an area of almost twice the size of Ukraine, being classified as the world’s 25th most populous nation. Furthermore, South Africa is also ranked as an upper-middle income economy by the World Bank, and is considered to be a newly industrialised country, having the second largest economy on the continent. The aviation industry plays a significant role in supporting the economic and social growth of the country, with South Africa being served through 22 commercial airports providing scheduled airline services (according to Innovata schedule data for 2014), out of which, Johannesburg, Cape Town, Durban and Port Elizabeth, are the major gateways commanding 89% of the total seat capacity in this country market. Benefitting from a favourable economic climate, the country’s four primary airports have grown their combined annual traffic by 5.9% since anna.aero last looked at this market four years ago.

Examination of annual traffic data facilitated by Airports Company of South Africa (ACSA) reveals that the four South African airports handled a combined total of 32 million passengers in FY2014, representing a modest decrease of 0.2% when compared to FY2013 figures. In fact, the country’s busiest airport at Johannesburg, is the only gateway that experienced growth (+1.1%) in FY2014, while Cape Town (-0.5%), Durban (-4.3%), as well as Port Elizabeth (-4.6%) provided traffic declines. 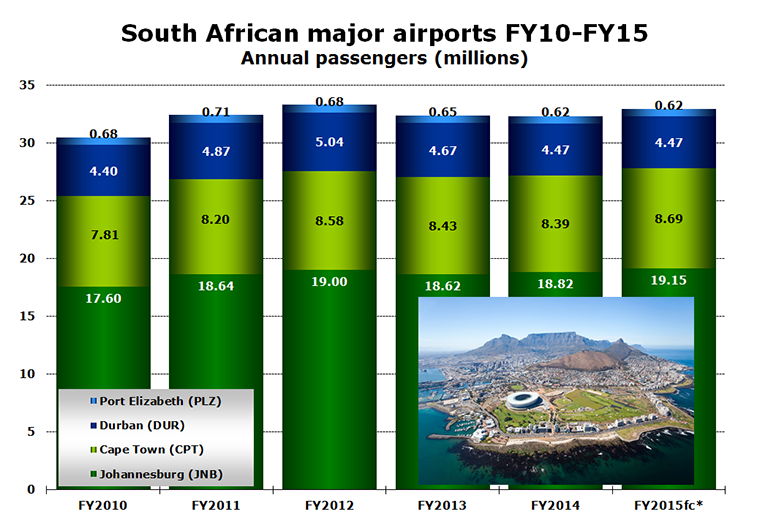 Overall, looking at traffic development between FY2010 and FY2014, the combined passengers of the four major airports grew with an average annual growth rate (CAGR) of 1.2%, with Cape Town outperforming (+1.4%) its airport peers from the country. In the first five months of FY2015, for which traffic data is already available, the four airports posted an increase of 1.9% when compared to the corresponding period of FY2014, with over 13 million passengers achieved until end-August. If they continue on their existing growth trajectory, anna.aero forecasts that the four airports will handle close to 33 million by next April (Johannesburg – 19 million, Cape Town – 8.7 million; Durban – 4.5 million; Port Elizabeth – 0.6 million). 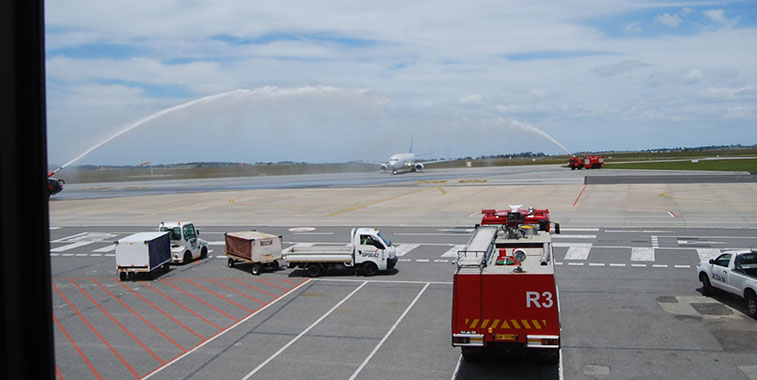 On 13 November, FlySafair’s new route from Cape Town was celebrated at George Airport with the traditional water arch salute. The new sector will be operated daily, utilising the airline’s 737-400s.

As of November 2014, the top 12 carriers serving the South African market account for 92% and 93% of all weekly seats and flights respectively. The national flag carrier, South African Airways (SAA), is by far the dominant operator in this country market, as it commands 42% of the total market, being three times bigger than the second operator, British Airways. SAA operates a total of 83 airport pairs, of which 50 are international routes. Gaborone in Botswana is the Star Alliance carrier’s most frequently served international destination with 42 weekly flights from Johannesburg, followed by Lusaka in Zambia with 33 weekly flights. Furthermore, SAA has a 59% share of weekly seats in the South African domestic market, on which it directly competes with CemAir, BA, Mango, Comair and FlySafair, with the latter having commenced its third route on 13 November, this time from Cape Town to George.

Also noteworthy, SAA, British Airways, Mango and Comair, make up 81% of total capacity this month, with no other operator having more than 4% capacity share in South Africa. Interestingly, the flag carrier of UK has Comair as an operating airline in South Africa, which operates for the oneworld member under a franchise agreement. Nonetheless, despite the fact that Comair flies 48,901 weekly seats for BA (representing 72% of the oneworld carrier’s weekly capacity in this country market), the franchisee also flies under its own brand, offering 65,860 weekly seats on seven domestic airport pairs. 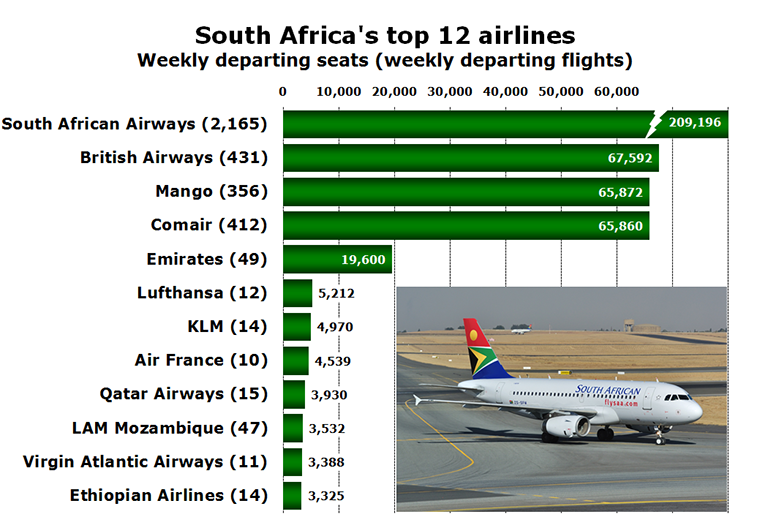 Total weekly seat capacity in South Africa has gone up 2.2%, with seven of the top dozen carriers recording growth, when comparing data from this November with the same week last year, while KLM and Air France saw their operations unchanged. Qatar Airways is not only a new entrant into this year’s graph, but also the fastest growing carrier, with a net increase of 1,737 weekly seats or 79% over the last 12 months. Besides commencing five weekly flights from Doha to Cape Town, the MEB carrier has also added three further weekly flights on the 6,215-kilometre sector to Johannesburg. By comparison, Virgin Atlantic Airways, posted the greatest capacity decline (-15%), due to reducing its frequency on the London Heathrow-Cape Town sector from daily to four times weekly over the last 12 months.

While the domestic sector is South Africa’s biggest country market representing 67% of all weekly seats, a total of 44 countries can be reached non-stop from South African airports according to Innovata schedule data for this month. At around 21,400 weekly seats and 21% more than in the corresponding week last year, the United Arab Emirates remains the dominant international market, being served by Emirates and Etihad Airways with a combined 56 weekly flights from Cape Town, Johannesburg and Durban. 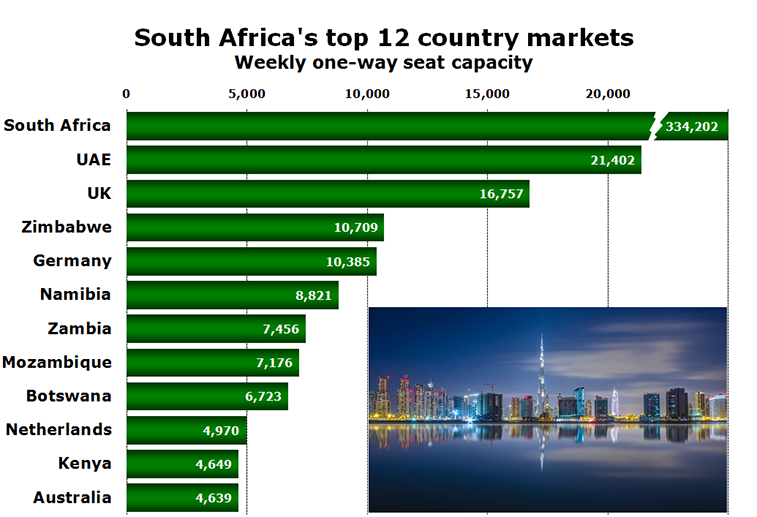 Even though capacity to the UAE has grown by 21%, operations to neighbouring Zimbabwe have outperformed the services to the Middle East country, as they posted growth of 49%, or an additional 3,533 weekly seats, due in part to Air Zimbabwe’s new flights from Bulawayo, Harare and Victoria Falls to Johannesburg. In addition, Fly Africa introduced operations to Johannesburg from Harare and Victoria Falls, with the latter having been added on 23 July with thrice-weekly flights.

South Africa’s third busiest airport, Durban, is getting ready to host the 21st annual World Route Development Forum, in September 2015. The future host airport boasts connections to five countries from six scheduled carriers, including BA, Emirates, Mango, Air Mauritius, Comair and SAA. Speaking to anna.aero on the second day of World Routes Chicago 2014, Saxen van Coller, CEO, Dube TradePort Corporation (Durban), stressed the desire of attracting an African regional airline, as well as an international carrier to the largest city in the South African province of KwaZulu-Natal. Durban is also concentrating on air service improvements, with a clear plan for its most desired new routes. One particular new link to Europe features top on its list: London. “Other potential markets from Durban include Germany and France, while North America and other Middle East cities are also in our sights,” added van Coller. 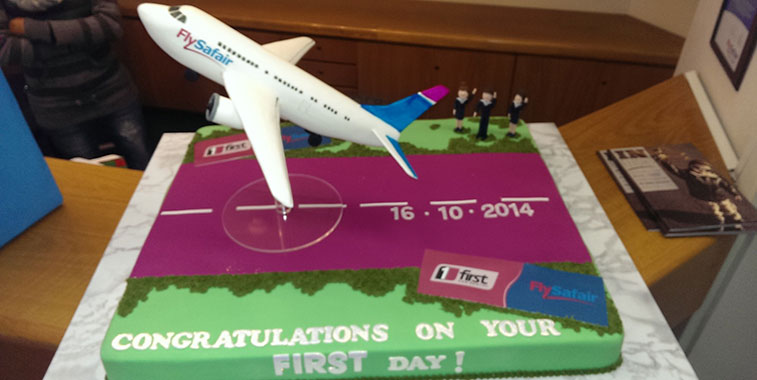 FlySafair’s first operations, from Cape Town to Johannesburg, were celebrated on 16 October with this fantastic cake. Besides this, the latest start-up LCC based in South Africa also flies to Port Elizabeth (12 times weekly) and George (daily) as of 30 October and 13 November respectively.