Volaris growing faster in US than in Mexico; has 23% of domestic market with fleet of 50 Airbus 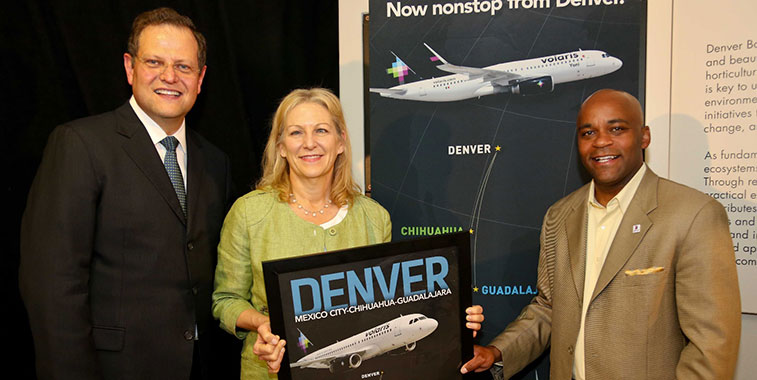 In July, Volaris launched two new routes to Denver in Colorado, first from Guadalajara and then from Chihuahua. Celebrating the event are: Volaris CEO Enrique Beltranena; Denver Airport CEO Kim Day; and Denver Mayor Michael B Hancock. Denver is one of 15 US airports currently served by the Mexican LCC which has seen its US traffic grow by 19% this year, while domestic traffic has increased by a more cautious 7%.

In the first nine months of 2014, Volaris has achieved a 23.2% share of the Mexican domestic market, carrying 5.63 million passengers according to DGAC statistics. The LCC has been operating since March 2006 and currently operates a fleet of 51 Airbus narrow-body aircraft; 19 144-seat A319s and 32 174-seat A320s. In its most recent company presentation, the airline claims to have the lowest unit costs of any carrier in the Americas. Domestic demand peaks in July, and this July the carrier transported over 800,000 domestic passengers in a month for the first time.

This year Volaris has been practicing disciplined capacity growth with domestic ASMs (Available Seat Miles) up a relatively modest 8.2% in the first nine months of the year. Booked passenger numbers are up 6.6% to 5.89 million, which indicates a no-show rate among booked passengers of around 4.4%. As a result, the booked load factor on domestic routes has fallen 2.2 percentage points from 83.1% in the nine months ending September 2013, to 80.9% in the corresponding period this year. 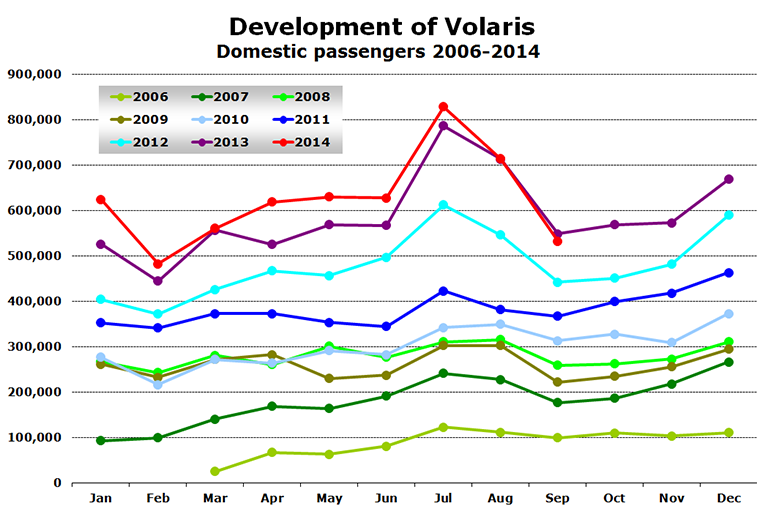 International passenger numbers are up 18.9% to 1.31 million in the first three-quarters of 2014, with load factors of just over 85%. Since the start of the summer season Volaris has added eight new cross-border routes involving a total of six US airports and four Mexican airports. All of the routes have been started with just one or two weekly frequencies. This week sees the start of two new US services from Guadalajara to Orlando and Chicago O’Hare.

The airline sees substantial opportunities for further growth in the US-Mexico leisure travel market, and produced a nice graphic to illustrate this potential in its most recent company presentation at the end of October. International routes currently account for 25.5% of the airline’s ASMs (Jan-Sep 2014) compared with 23.8% in the corresponding period last year. 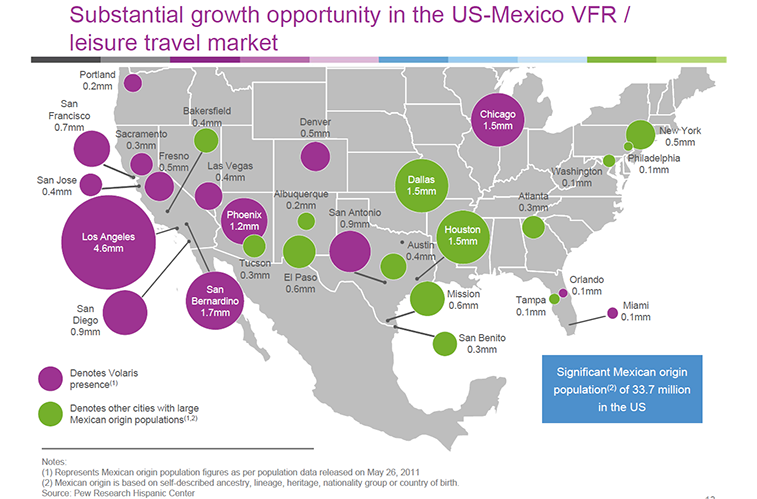 While Mexico City remains the airline’s busiest base of operations with over 50 daily departures across 25 destinations, Tijuana has been overtaken by Guadalajara this summer as the airline’s second busiest airport for aircraft movements. Monterrey is Volaris’ fastest-growing airport this year, with the number of weekly departing flights trebling from 28 to 86. The airline’s busiest US airport is Los Angeles (ranked seventh) with 42 weekly flights spread across six Mexican airports. Las Vegas ranks 13th with 22 weekly flights, 11 each to Guadalajara and Mexico City. 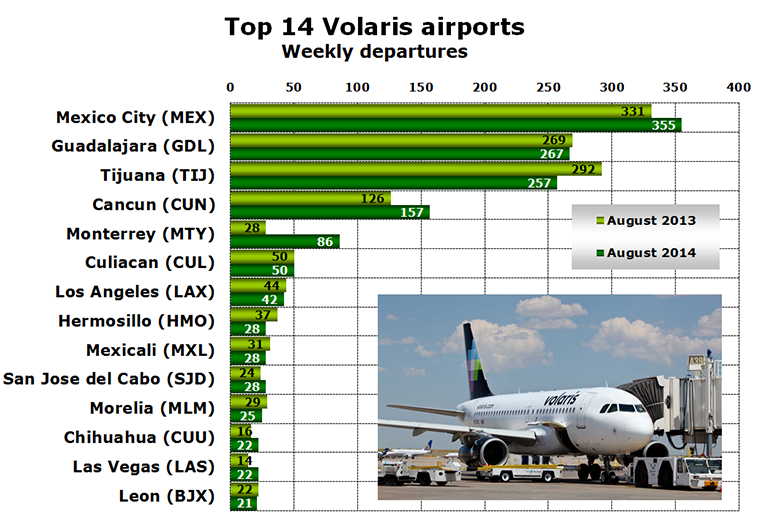 In terms of weekly frequencies Volaris’ 83 times weekly service between Mexico City and Cancun is the airline’s most frequently flown route, on which it competes with Aeromexico (121 weekly flights), Interjet (53) and VivaAerobus (45). With a sector length of 1,287 kilometres the route also generates the most ASKs (Available Seat Kilometres) of any Volaris route, 21% more than the next biggest route between Guadalajara and Tijuana. 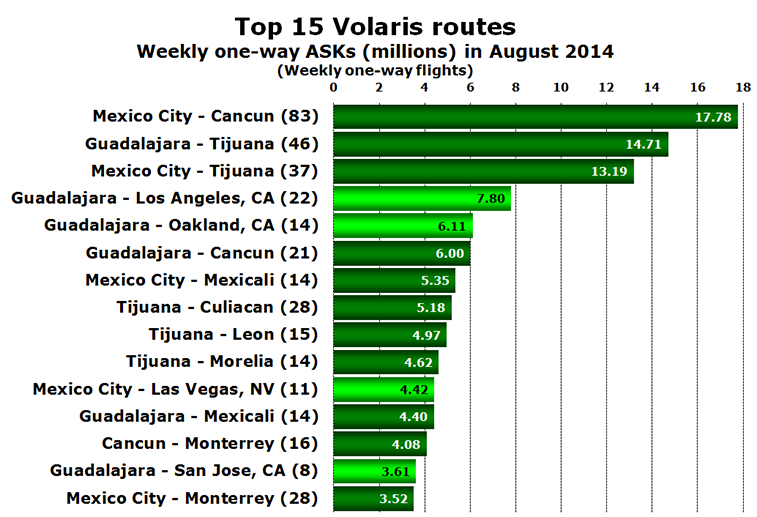 The fourth and fifth biggest routes in terms of ASKs are both transborder routes (shown in light green) from Guadalajara to destinations in California. Two other US routes also make the top 15 as measured by ASKs. The airline’s top 15 routes account for 49% of all ASKs.

According to the airline’s latest presentation it expects its fleet to grow to 55 aircraft during the next financial year. This will include additional A320s (with sharklets) and the first A321s to join the fleet. The following year the fleet is expected to grow to 59 aircraft and will include its first A320neos. The number of A319s in the fleet will by then have reduced to just 12. 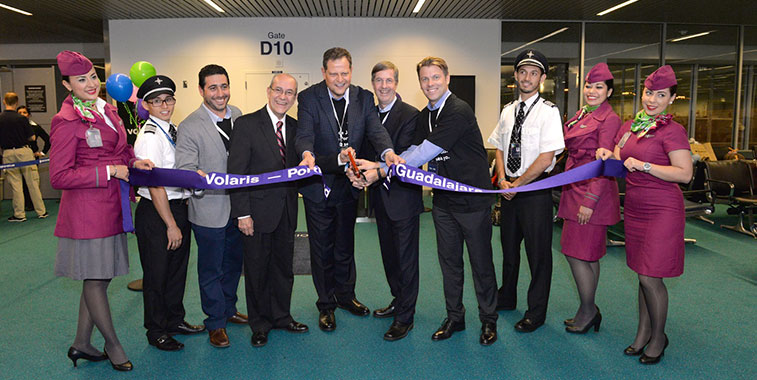 Portland in Oregon became Volaris’ most recent new US destination when the LCC began twice-weekly flights from Guadalajara on 6 October 2014. The 3,293-kilometre service now also holds the record as the longest sector flown by Volaris.