Alitalia’s decision to close Air One results in loss of 15 routes from Italian airports; opportunities created for other carriers 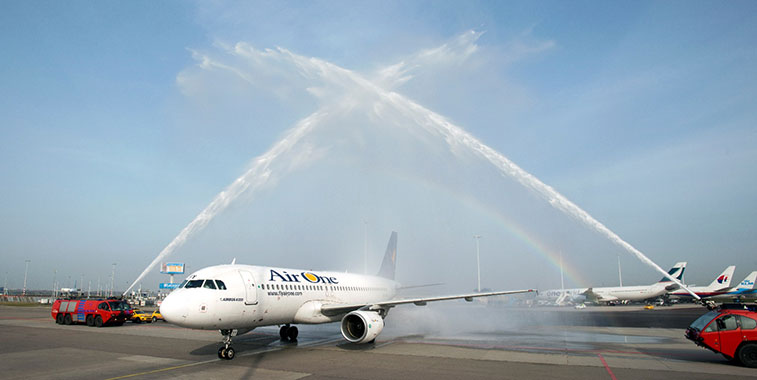 Before its closure at the end of the summer 2014 season, Alitalia’s in-house ‘Smart Carrier’ Air One started a raft of new routes, including a twice-weekly Palermo to Amsterdam service, seen here being greeted at Amsterdam Airport Schiphol by the traditional water arch salute on 30 March 2014. The Palermo-Amsterdam route is currently one of 15 former Air One routes not being served by any carrier next summer.

Alitalia’s in-house ‘Smart Carrier’ Air One ceased operations at the end of the summer 2014 season. During the summer the airline’s 10 A320s operated over 50 routes, of which 26 had only been launched at the beginning of the 2014 season. Most of the new routes were low-frequency international services from its bases at Catania and Palermo in Sicily. During the summer peak of August, Air One operated scheduled services from a total of 34 airports, of which 16 were in Italy. The busiest airport by some distance was Catania, followed by Venice Marco Polo and Palermo. Only two non-Italian airports (Tirana in Albania and Paris CDG) appear among the airline’s top 12 airports based on weekly departures. 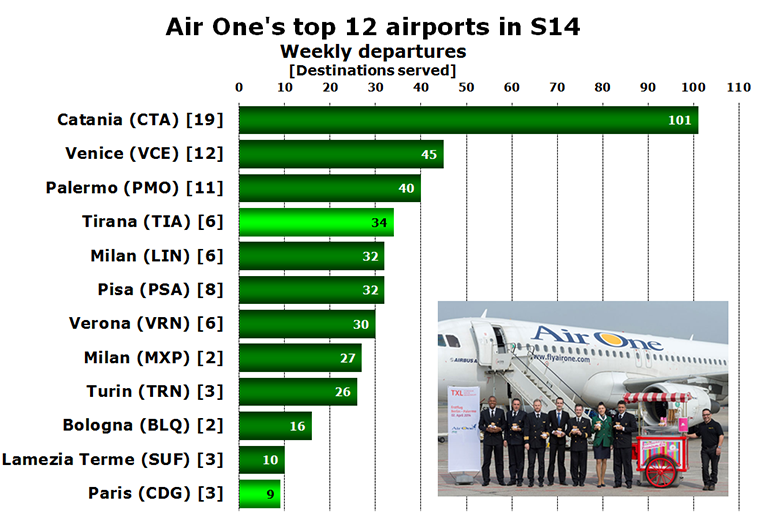 As a result of Air One’s closure and other airline network decisions, schedule data for August 2015 suggests that of these top 12 Air One airports, those facing the biggest reduction in weekly flights next summer are Pisa (-32.6%), Verona (-32.2%), Catania (-16.4%) and Bologna (-10.6%). Pisa is currently showing a significant cut in Ryanair services, while Meridiana appears to be significantly down-sizing at the other three airports. It should be stressed that this is based on currently available schedule data for next August, and some airlines will still be fine-tuning their peak summer programmes. Closer analysis of Ryanair’s currently known schedule for next summer shows an almost 30% cut in flights, suggesting that much of Ryanair’s summer schedule is still being finalised, including quite likely in Pisa. [For comparison, easyJet is already showing a 3% increase in flights for next August.]

Alitalia, Volotea and Vueling all take over Air One routes

Analysis of currently available schedule data for next summer reveals which of Air One’s former routes have been taken over by other carriers, or have seen frequency increases by existing carriers serving the routes. On around 60% of the routes, Air One had faced competition during the summer. Not surprisingly on several routes, Alitalia has stepped in to replace its former subsidiary. Other carriers entering markets previously served by Air One are germanwings, NIKI, Volotea and Vueling. Additional new services may yet still be announced.