ASKs between Middle East and US increase by 35%; nine new routes started in last 12 months 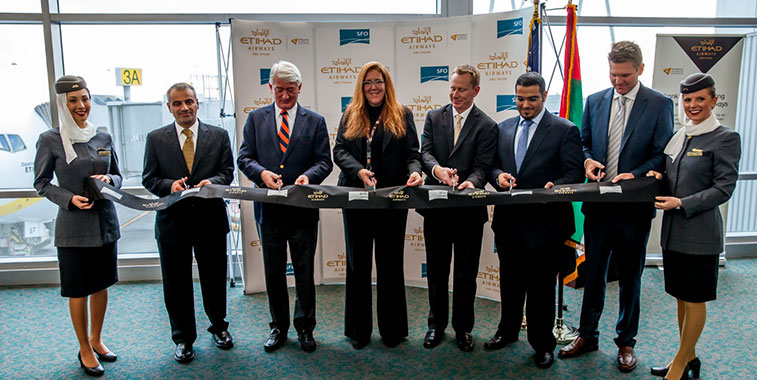 This week, Etihad Airways launched daily operations from its Abu Dhabi hub to San Francisco – on 3 December it will commence services to its sixth US destination, when it begins a thrice-weekly flights to Dallas/Fort Worth. As a result of this schedule growth, the UAE to the US market has extended the gap over other country pairs in the Middle East-US market.

The march of the MEB3 – Emirates, Etihad Airways and Qatar Airways – towards global airline domination is well documented and does not need to be pontificated on again here. However, it is only when you start looking at individual market segments, as we will here by scrutinising the Middle East to US market, that their combined inexorable growth takes your breath away. This market coupling has experienced some particularly rampant growth figures – weekly ASKs up by 35%, weekly flights and seats up by 32% – the majority of which is being driven by the MEB3 airlines. The ASK growth rates of Saudi Arabian Airlines (+19%) and Royal Jordanian (+29%) to the US would ordinarily be something worthy of discussion, but these numbers are but small beer when compared to the titans operating out of Dubai, Abu Dhabi and Doha.

The Middle East to US market is currently limited to just six country pairs. Potential country pairs omitted from the listing are Bahrain, Iran, Iraq, Lebanon, Oman, Syria and Yemen to the US, with perhaps Bahrain and Oman being the only likely additional offerings from the region in the short-term, given the ongoing political strife in the Middle East. With the dual hubs of Dubai and Abu Dhabi being situated in the UAE, it is of no surprise that this country pair dwarfs the remaining five. 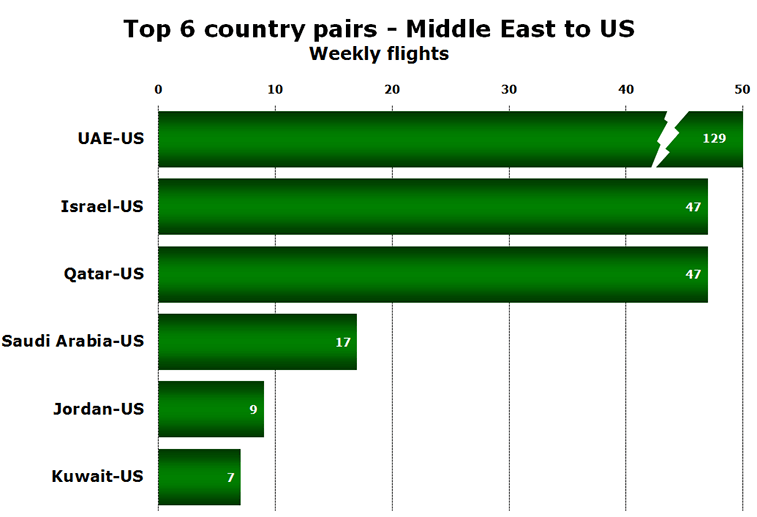 While the annual growth in weekly flights (+42%) since December 2013 between the #1 country pair of the UAE and the US has been far from sluggish, its Qatar that offers most significant hike in its numbers, growing by 68%. The addition of services from Doha to Philadelphia (launched 2 April), Dallas/Fort Worth (1 July) and Miami (10 June) have been the three new route reasons for this growth. Israel’s place in second is surely under threat by Qatar, although according to anna.aero New Route Database the oneworld carrier has no firm plans currently to add any further US destinations.

As a result of its 32% annual growth, the Middle East-US market has taken a significant step towards providing 100,000 weekly seats, increasing from 64,579 to 85,202 in 2014. The approach towards this landmark volume has come despite the second-placed city pair posting a 10% annual capacity reduction. Three quarters of the top 12 city pairs are monopoly routes, while the overall the number of routes has increased by nine to 36 over the last 12 months, thanks to new services between: 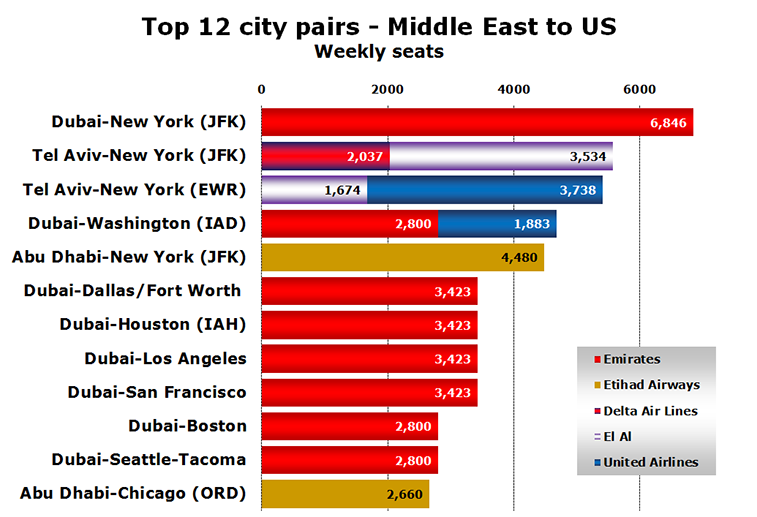 Five of the top 12 routes have not delivered any annual growth, including the #1 city pair. The fastest growing city pair is Abu Dhabi to New York JFK, which now offers a double-daily 777-300 service compared to last December’s daily flights. This growth has meant the route has leapt from 12th spot last year to fifth overall. Not far behind with 84% annual growth is Emirates’ Dubai-Dallas/Fort Worth route which has improved its standings from 15th to sixth.

In the past 12 months, the number of airlines serving the Middle East to US market has gone unchanged with no new entrants challenging the incumbents. Despite the dynamic 35% growth in terms of overall ASKs, the 10 serving airlines have also retained their respective market positions. However the 99% growth in Etihad’s ASKs has seen it dramatically reduce the gap on Qatar Airways in second place, which only grew by 62% year-on-year. Although the Abu Dhabi-based airline has detailed some of its 2015 new routes as far out as next December (Dar es Salaam), of the nine planned additional services in anna.aero’s New Route Database, none of them would see any further development in the US (the 3 December 2014 launch of Dallas/Fort Worth has been included in this analysis). Of course, the airline may well grow in the US market and pass Qatar Airways by adding capacity and/or frequency instead. 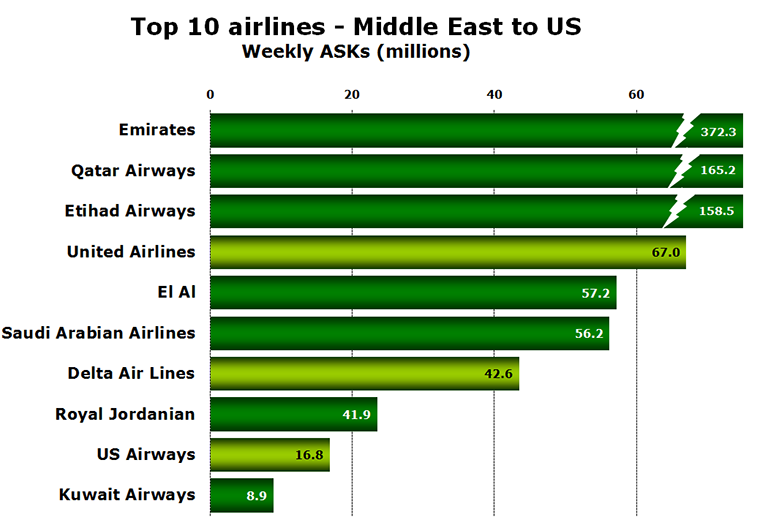 Two of the top 10 airlines have trimmed capacity between the two regions. El Al’s 1% cut is almost negligible, whereas the 8% reduction meted out by Delta Air Lines is more marked. The decline came as the SkyTeam carrier has replaced the 747 operation from New York to Tel Aviv with a 777-service, while the Atlanta to Dubai service remains unchanged, being flown by its 777-200LR fleet. The Middle East to US route is dominated by Middle Eastern carriers, with just three of the top 10 being US carriers (highlighted in light green). Noticeably absent is American Airlines, although this will of course change as US Airways is fully-merged into the oneworld airline.