On 20 November, tame expanded its presence at Fort Lauderdale with the addition of its second route, this time from Guayaquil. The new sector will be served thrice-weekly (Tuesdays, Thursdays and Sundays), utilising the airline’s 162-seat A320s.

Covering an area of 283,560 square kilometres (being slightly larger than the UK), Ecuador is nestled away in the north-west corner of South America, having a population of just over 15 million people. While its capital is Quito (with around 1.6 million inhabitants), which was also declared an UNESCO World Heritage Site in the 1970s for having the best preserved and least altered historic centre in Latin America, Ecuador’s largest city is Guayaquil (2.3 million). As a result of the two cities being home to almost 30% of the entire population, Quito and Guayaquil airports are the two major gateways to Ecuador, which have increased their combined annual seat capacity by 6.8% since anna.aero last looked at this country market four years ago. Overall, Ecuador is served by 19 commercial airports providing scheduled airline services (according to Innovata schedule data for 2014), out of which Quito and Guayaquil command 82% of the total seat capacity in this country market.

Examination of Innovata annual capacity reveals that 7.5 million one-way seats are offered on air services involving Ecuadorian airports this year, representing a double-digit decrease of 14% when compared to 2013 figures. At -12% and -13%, both Quito and Guayaquil respectively posted capacity decreases. This significant decline in the Ecuadorian annual capacity has come as a result of a number of carriers recording capacity decrease this year, namely Aerogal (-80%), LAN Airlines (-9.8%), LAN Ecuador (-30%), TACA Airlines (-85%), tame (-11%), while LACSA and CONVIASA withdrew their operations. Also noteworthy, Aerogal, TACA and LACSA’s operations have been absorbed partly by Avianca, which grew its annual capacity by over 250% in 2014. 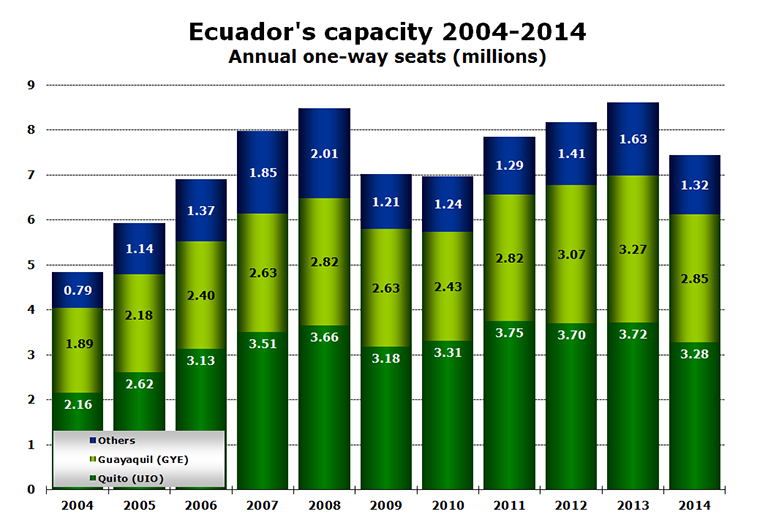 Looking at annual seat figures between 2004 and 2014, the combined capacity of the 19 Ecuadorian airports grew with an average annual growth rate (CAGR) of 4%, with Quito outperforming slightly (+3.9%) its airport peer Guayaquil (+3.8%). Interestingly, both airports increased their individual capacity by 51% this year, when looking back 11 years to 2004.

As of December 2014, Ecuador is served by a total of 13 airlines, with the flag carrier tame being the dominant player in this country market, as it commands 39% and 44% of seats and flights respectively. The airline, which was founded in 1962, operates a total of 25 airport pairs, of which nine are international routes. That said, Fort Lauderdale is tame’s most frequently served international destination with a combined 10 weekly flights from Quito and Guayaquil. In fact, the airline has launched thrice-weekly flights from Ecuador’s second busiest airport to the US destination on 20 November, utilising its A320s. Furthermore, the flag carrier has a 53% share of weekly seats in the Ecuadorian domestic market, on which it directly competes with Avianca (which has Avianca Ecuador as an operating airline in this country) and LAN Ecuador. 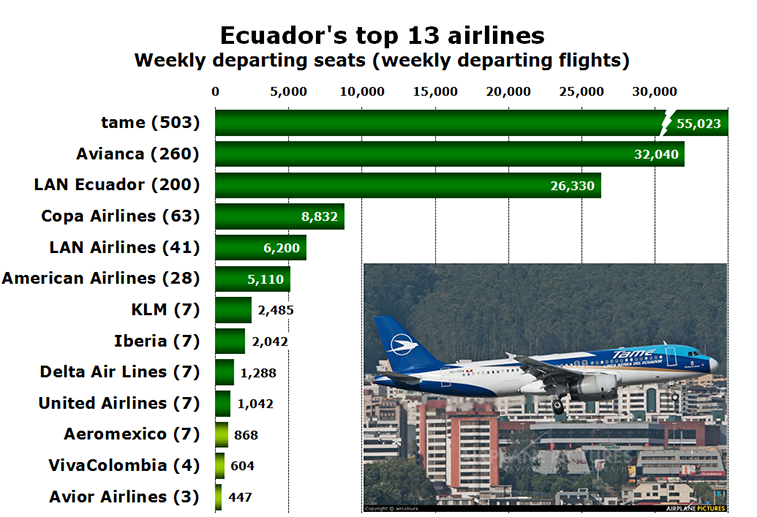 Total weekly seat capacity in Ecuador has gone down 12%, with four carriers recording growth, when comparing data from this December with the same week last year, while American Airlines and KLM saw their operations unchanged. Ecuador has seen the arrival of three new airlines (highlighted in bright green) in the past 12 months, namely Aeromexico with daily flights from Mexico City, VivaColombia with four weekly flights from Bogota, as well as Avior Airlines’ thrice-weekly operations from Barcelona in Venezuela.

As a result of having integrated TACA and Aerogal’s operations as part of their merger, Avianca is the fastest growing carrier, with an impressive net increase of 25,110 weekly seats or 362% over the last 12 months. By comparison, Iberia noted the greatest capacity decline (-29%), due to reducing its frequency on the 9,012-kilometre sector from Madrid to Guayaquil from daily to four times weekly. Overall, only one low-cost carrier serves the Ecuadorian market, namely VivaColombia that operates its 151-seat A320s four times weekly from Bogota to Quito.

While the domestic sector is Ecuador’s biggest country market representing 84% of all weekly seats, 15 countries can be reached non-stop from Ecuadorian airports according to Innovata schedule data for this December. At around 12,300 weekly seats, and 22% more than in the corresponding week last year, the USA remains the dominant international market, being served by five carriers (American, Delta Air Lines, LAN Ecuador, tame and United Airlines), with a combined 73 weekly flights from Quito and Guayaquil. 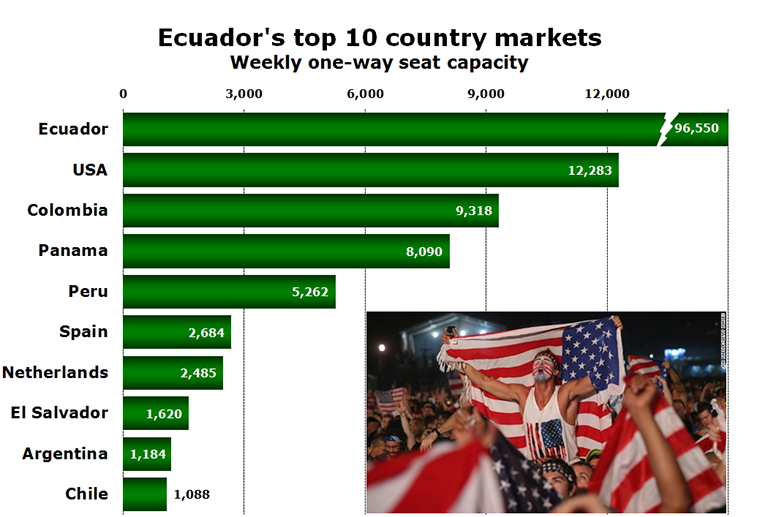 While the USA is the fastest growing country market, being followed by Panama with an increase of 14% and El Salvador with 1.1%; Spain has witnessed the most significant decrease (-28% or 1,064 fewer weekly seats), as a result of Iberia and LAN Airlines having reduced their frequencies on the 9,012-kilometre airport pair from Guayaquil to Madrid. On 18 October, tame celebrated with a ribbon cutting ceremony and a press conference at Quito Airport, the launch of daily flights to Fort Lauderdale, its second US destination after New York JFK.