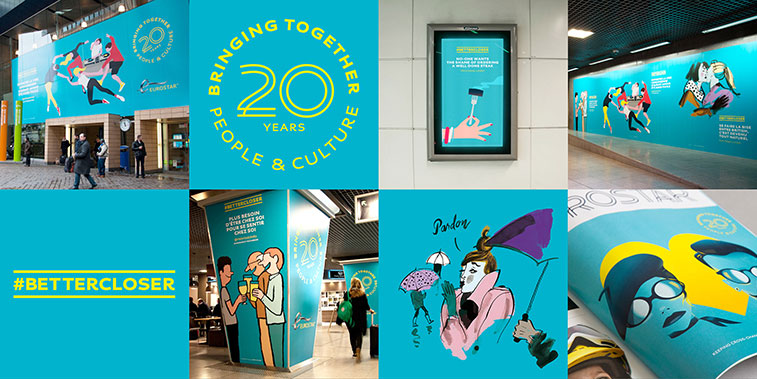 Last week Eurostar celebrated 20 years of high-speed rail services between the centres of London and Paris through the Channel Tunnel, an unlikely legacy of Britain’s Eurosceptic Prime Minister Margaret Thatcher and her French counterpart President Mitterand. As a result, the air travel market between the two great European cities (just 350 kilometres apart) has fallen from almost four million passengers in 1994, to just 1.8 million in 2013.

In November 1994 the UK and France finally became connected via a high-speed rail link using the Channel Tunnel. The main route was between London and Paris, though Brussels was also served. Over the years other stations have been added to the network (such as Lille and Disneyland Paris), though not as many as might have been expected. Annual passenger numbers on Eurostar services have now, after 20 years, reached 10 million per annum, still a long way short of the original forecasts of 21.4 million by 2004, which failed to take into account the response of ferry operators and the emergence of low-cost airlines. 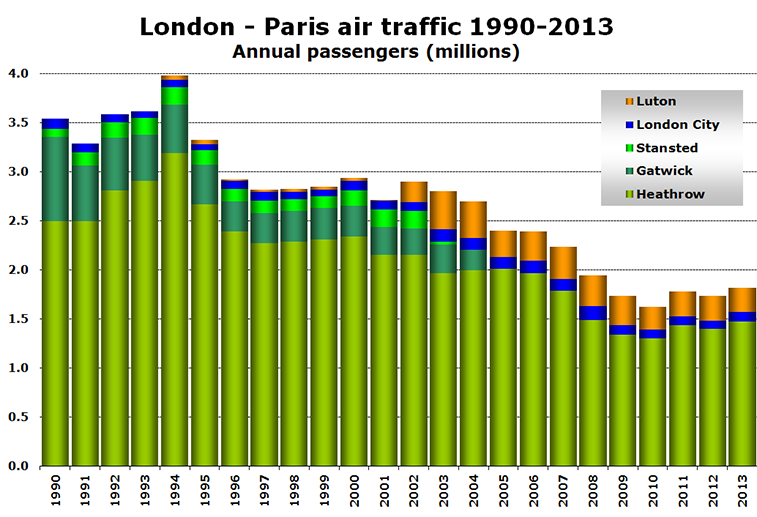 As can clearly be seen, air service demand fell by over one million passengers in less than two years, to around 2.9 million in 1996. Air travel demand then stabilised at this level until 2002, after which air demand fell by a further 45% in eight years to just over 1.6 million in 2010. Improvements to the rail service over the last 20 years include the transfer of the London terminus from Waterloo to St. Pancras and the opening of the Channel Tunnel Rail Link in the UK, enabling the trains to travel at their top speeds through the UK countryside as well as in France. As part of the 20th anniversary celebrations it was announced that Eurostar had commissioned additional new Siemens trains. The first of these new trains from a previous order are expected to become operational by the end of 2015. It was also recently announced that from next May there will be a new year-round direct service to Provence, stopping at Lyon, Avignon and Marseille, followed at the end of 2016 by the launch of a direct route to Amsterdam with stops in Antwerp, Rotterdam and Amsterdam Airport Schiphol along the way.

At the beginning of S14, easyJet introduced a new airport pair between London and Paris when it began operating twice-daily A319 flights from London Gatwick to Paris CDG. With CityJet adding an extra daily flight to its London City service to Paris Orly it means that seat capacity this November between London and Paris is actually up by almost 14% compared with a year ago. As a result, air passenger numbers between the two capitals could, in 2014, reach the highest level seen since 2007.