Hawaiian Airlines grows by 4.8% in 2013; regional subsidiary launched in March On 13 June, history was made at Oakland Airport, as Hawaiian Airlines commenced its first ever non-stop flight from Kona. The achievement was marked with dance performers, live Hawaiian music and hula at the gate.

Founded on 30 January 1929 as Inter-Island Airways to provide short sightseeing flights over O’ahu, Hawaiian Airlines has grown rapidly beyond these borders, offering flights to a total of 28 destinations this December. The Honolulu-based carrier has established itself as the ninth largest airline operating in the USA, with nearly 1.3% of weekly seats (if counting American Airlines/US Airways as merged carriers). Operating a fleet of 48 units (including 19 A330-200s, 18 717-200s and 11 767-300s), Hawaiian Airlines has been growing without interruption in recent years, as analysis of Innovata seat capacity indicates that around 250,000 weekly seats will be offered this December, and 24% more since anna.aero last looked at this carrier three years ago.

The biggest carrier at Honolulu (where it commands around 49% of all weekly seats this October, followed by United Airlines and Delta Air Lines with 12% and 9.5% respectively), Hawaiian Airlines handled 9.9 million passengers in 2013, representing an increase of 4.8% over the previous year. In fact, 2013 was the airline’s sixth consecutive year of profitability, as operating revenues increased by 9.9% to $2.2 billion. Further growth is expected in 2014, with a number of new routes having been added to its network, including the addition of the airline’s second route to San Francisco on 20 November, when it began twice-daily flights on the 3,763-kilometre sector from Kahului. 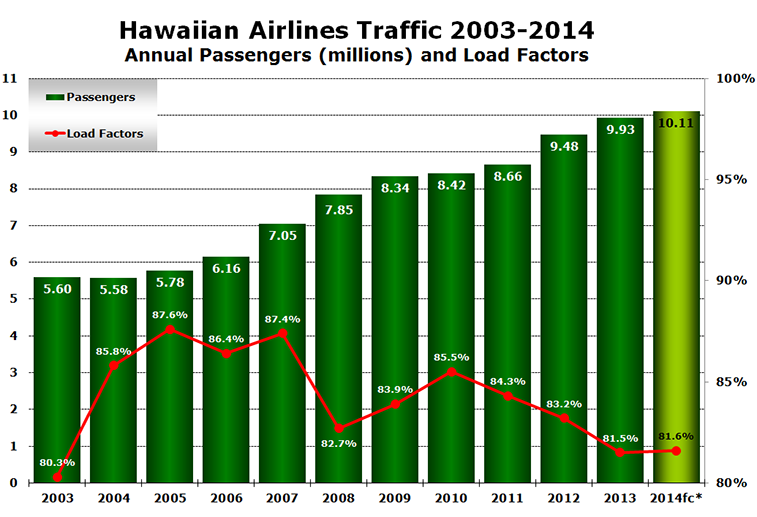 Overall, looking at passenger development between 2003 and 2013, Hawaiian Airlines posted a modest decrease of 0.4% in 2004. With that exception, the carrier’s traffic has increased each year, recording an annual average growth rate (measured in CAGR) of 5.4% over the 2003-2013 timeframe. In addition, its load factors have oscillated between 80.3% and 87.6% over this period. The carrier has had a fantastic development in the last 11 years, with the most dramatic double-digit growth having been recorded in 2007 (+14%) and 2008 (+11%), the latter year being notably when the airline’s main competitor Aloha Airlines ceased operations.

In the first 10 months of 2014, for which passenger data is already available, the carrier’s traffic has increased by 1.8% (when compared to the corresponding period of the previous year), with 8.5 million passengers achieved until end-October. If Hawaiian Airlines continues on this growth trajectory, it would pass the magical 10 million passenger figure this year, based on anna.aero’s forecast.

According to Innovata schedule data for this December, the airline serves nine markets in North America, Asia and Australasia. Following a yearly increase of over 10% this December, inter-island traffic within the state of Hawaii heavily dominates the airline’s network, accounting for 80% of total weekly seat capacity. Nevertheless, this capacity is split on only 11 routes; one from Molokai on Hoolehua, five from Honolulu on Oahu, four from Kahului on Maui as well as another one linking Honolulu to Kahului.

Ranking second, the US mainland, which accounts for 15% of all weekly seats, is served by Hawaiian Airlines with a combined 134 weekly flights to New York JFK, Las Vegas, Los Angeles, Oakland, Portland, Phoenix, San Diego, Seattle-Tacoma, San Francisco, San Jose and Sacramento. On the other hand, at around 4,893 weekly seats, Japan remains the dominant international market served by the airline, as it flies daily to Tokyo Haneda and Osaka Kansai, as well as thrice-weekly to Sendai, all of which are operated from Honolulu. 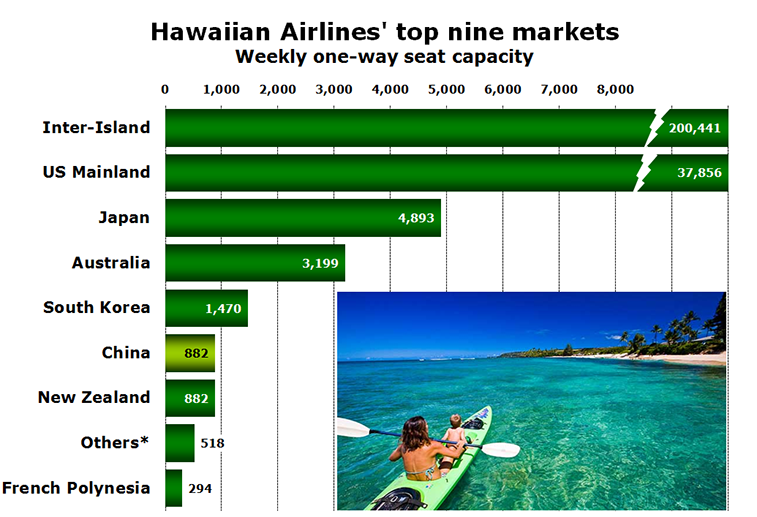 Three of the top nine markets experienced growth this December, while the carrier’s operations to New Zealand, French Polynesia and the US Pacific Trust Territories and Possessions have remained unchanged. Furthermore, Hawaiian Airlines began operations to a new country market in the past 12 months – China, as it commenced thrice-weekly flights on the 8,145-kilometre airport pair from Honolulu to Beijing. In terms of the fastest growing market, the stand out performance is that emanating from services to the US mainland (+16%), while Japan has witnessed the greatest capacity decrease (-27%).

On 11 March, Hawaiian Airlines launched a new regional subsidiary – ‘Ohana by Hawaiian, with the addition of thrice-daily flights on the 87-kilometre sector from Honolulu to Molokai. The carrier operates three 48-seat ATR 42-500s under contract with Empire Airlines. Since it commenced flights in March, ‘Ohana has expanded rapidly, offering this December 17,280 weekly seats (representing 6.9% of Hawaiian Airlines’ weekly capacity) on six inter-island links. Commenting on ‘Ohana’s inaugural flight to Molokai in March, Mark Dunkerley, CEO, Hawaiian Airlines, said: “Today marks a very special day for us as Hawaiian Airlines returns to the island of Moloka‘i, in partnership with Empire Airlines, to serve its residents and community members with our new turboprop service. With the launch of ‘Ohana, our island communities are now connected with a new, safe and reliable service that our kama‘āina and their ‘ohana can enjoy.” On 11 March, Hawaiian Airlines launched a new regional subsidiary – ‘Ohana by Hawaiian, with the addition of thrice-daily ATR 42-500 flights from Honolulu to Molokai. The airline has expanded rapidly, offering this December 17,280 weekly seats (representing 6.9% of Hawaiian Airlines’ weekly capacity) on six inter-island routes.